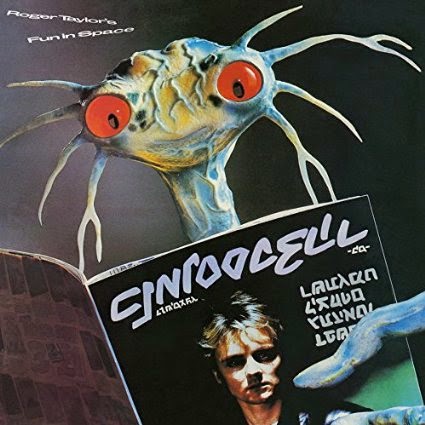 In October of last year, Omnivore Recordings released Roger Taylor’s Best, a collection of music from Queen drummer Roger Taylor’s solo efforts. Now his first two solo albums are being re-issued with bonus tracks. Fun In Space, his first solo album, originally released in 1981 when Queen was at the height of its success, features such excellent material as “Let’s Get Crazy” and “My Country.” On this album, Roger Taylor performed all the vocals and played all the instruments (the only exception being that he got some help from David Richards on keyboards). This special re-issue, which was produced by Roger Taylor and Cheryl Pawelski, includes liner notes by Greg Brooks and song lyrics.

Roger Taylor follows that with “Laugh Or Cry,” a kind of sweet and unusual love song, which I bet would work equally well as an acoustic folk song. Here is a taste of the lyrics: “But baby you make me laugh/And baby you make me cry/I don’t mind either way/Now I don’t care why/You just gotta laugh, or cry/Right ‘til the day you die.” There is a short but surprising drum bridge a couple of minutes into the song.

“Future Management (You Don’t Need Nobody Else)” is one of the tracks from this album that was included on last year’s Best. I really like the groove, and also the drive behind Roger Taylor’s vocals. This is a song that I appreciate more and more. The following track, “Let’s Get Crazy,” was also included on Best, and is one of my favorites. It’s just so much damn fun. “Let’s get crazy, let’s get wild tonight.” Hey, that’s all the encouragement I need. And then there’s that cool drum solo to help get us all pumped up. The other track from this album to be included on Best is “Magic Is Loose,” a grand and glorious song that should appeal to Queen fans.

“My Country I & II” is for me one of the best and most interesting tracks on the album. There is a lot going on here. On one level, it works as a simple personal political statement, with lines like “I would not fight for my country” and “Don’t wanna die for some old man’s crusade.” (Remember, this was the early 1980s, a very ugly time politically.) But there is something empowering in the music and rhythm of this song. I absolutely love the percussion. And Roger’s vocals at times have the power of Freddie Mercury’s, as when he sings, “Don’t wanna cry for somebody else’s need.” And I like the line, “Don’t have no part of no partisans.” I could live without the false ending, however.

The album concludes with its title track, “Fun In Space,” a song that opens with a heartbeat and references to science fictions novels. Its first lines are “Strangers in a strange land/In an alien heat.” Stranger In A Strange Land is a famous novel by Robert A. Heinlein, originally published in the early 1960s, while An Alien Heat is the first book of a science fiction trilogy by Michael Moorcock published in the 1970s. And the song certainly has a science fiction vibe to it, and tells us it will be “Stranger than fiction.”

This special re-issue includes three bonus tracks, including “I Wanna Testify,” which was released as a single in 1977 and also included on Best. It’s a seriously fun tune, and is the only cover song on the CD. Its flip side, “Turn On The TV,” is also included, and it has a great, heavy funky vibe (though in one section it oddly reminds me of some of Led Zeppelin's work - “We go to the place over the hill/Where the grass is greener/Where the life is sweeter/But all the time we know/That it never is”).

The final bonus track is the single version of “My Country,” which is significantly shorter than the album version, but still very cool.

CD Track List
This special re-issue of Fun In Space is scheduled to be released on March 24, 2015 through Omnivore Recordings. This album is also going to be released on clear vinyl (followed by black vinyl).
Posted by Michael Doherty at 5:54 PM