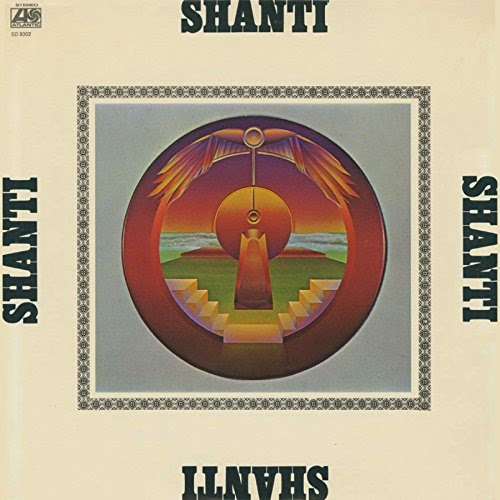 Shanti was a group in the early 1970s that combined rock, pop and jazz elements, with a heavy Indian influence, not only using traditional Indian instruments but also including Indian musicians in the lineup. There is also a psychedelic jam vibe to their music, and band member Zakir Hussain later played with Mickey Hart in Diga Rhythm Band. Shanti released only one LP, a self-titled album which is now finally getting a CD release thanks to Real Gone Music. This CD release features new liner notes by Richie Unterberger.

The album kicks off with a good rock tune, “We Want To Be Free,” which features some excellent work on guitar and a great groove. It’s the instrumental sections that really shine on this track. Fans of late 1960s San Francisco music will definitely find a lot to enjoy here. That track is followed by “Innocence,” one of the two longer songs on this album (this one clocking in at nearly eleven minutes). This one has much more of an Indian feel, beginning as a meditation and then taking on a wonderful rhythm a couple of minutes in, which then develops into more of a rock thing. There is a very positive feel to this instrumental track, and it goes into some exciting areas. It was written by Aashish Khan, the band’s sarod player.

Aashish Khan also composed the album’s other long instrumental track, “Shanti,” which is just under fifteen minutes. This one has more of a rock vibe from the start, but with a delicious Indian influence, and it gets kind of wild at times. There is even a percussion section, which leads briefly into a surprisingly familiar groove before returning to the percussion solo. And this extended drum solo is only one reason why this is one of my favorite tracks. “Shanti” also puts this band in that list of bands having a song sharing the band’s name – along with groups like They Might Be Giants, Bullied By Strings, I See Hawks In L.A., Bad Company and Kajagoogoo.

“Lord I’m Comin’ Round” totally succeeds as a rock tune, with nice work on vocals. And the album concludes with “I Do Believe,” a soft, kind of sweet, and very short acoustic tune.

CD Track List
This CD issue of Shanti is scheduled to be released on March 10, 2015 through Real Gone Music.
Posted by Michael Doherty at 9:39 PM