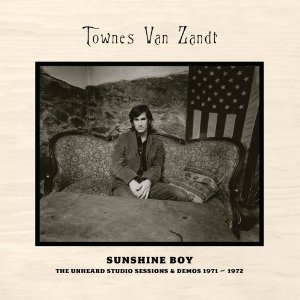 Years ago I looked up my birthday in a book to see what famous folks shared my day. Some cool people like Rik Mayall, Bret Easton Ellis, John Heard, and Peter Wolf (yes, from J. Geils Band) were all born the same day I was. But the one I was most excited about was Townes Van Zandt. Interestingly (to me, at least), the year I was born, Townes Van Zandt joked about being dead by naming his new record The Late Great Townes Van Zandt.

I’ve always loved his voice. It’s the voice of that friend who’s seen it all, and stops in occasionally (unexpectedly) to regale you with tales from the third ring of hell over a drink (your whiskey, of course). Plus, he was such a damned good songwriter. Check out these great lyrics from “Lungs”: “Gather up the gold you've found/You fool, it’s only moonlight/And if you try to take it home/Your hands will turn to butter/You’d better leave this dream alone/Try to find another/Salvation sat and crossed herself/And called the devil partner/And wisdom burned upon a shelf/Who'll kill a raging cancer/Seal the river at its mouth/Take the water prisoner/Fill the sky with screams and cries/Bathe in fiery answers.”

Though known for his serious lyrics, like those of “Lungs,” Townes also had a good sense of humor. I mean, check out these lines from “No Deal”: “The man down at the used car lot tried to sell me four wheels and a trunk/I said but man there ain’t no engine/He said the engine’s just a bunch of junk/You don’t need no engine to go downhill/And I can plainly see that’s the direction you’re heading in/And he handed me the keys.” (Later in that song he jokes about his own drinking too.)  I was fortunate enough to see him in concert once, at a small bar in Eugene, Oregon. I wish I’d recorded the show.

This new collection of previously unreleased recordings, Sunshine Boy: The Unheard Studio Sessions & Demos 1971-1972, is two discs of excellent material. The first disc is studio sessions. The second disc is demos. Some of his most well known songs are presented here, including “To Live Is To Fly,” “Pancho & Lefty” and “White Freight Liner Blues.” (And yes, I do wish there were a nice, rough version of “If I Needed You” in this collection, but maybe I’m getting greedy.)

Townes Van Zandt is known as a folk musician, and of course also does some country. But he shows he can do a bit of tough, kick-ass blues with his convincing cover of Elias McDaniel’s “Who Do You Love.” On the second disc he does another good blues tune, “Diamond Heel Blues,” this one an original with lyrics about Muhammad Ali, “the champion us long hairs love the most.”  He does a bit of bluegrass folk, with fiddle and all, on the wonderful “Blue Ridge Mountains” (in which he sings “I’ll lay a joint upon your grave, sir,” something most of the bluegrass musicians I know would appreciate).

The first disc opens with “T For Texas,” a Jimmie Rodgers song that finds Townes yodeling. There’s a certain humor to this recording, in its loose style, and in the line, “I’m going where that water tastes like Robitussin.” This song is some good-feeling country-folk, and I really dig Townes Van Zandt’s rendition.

The first lines of “Sunshine Boy” are “You won’t learn nothing from the sunshine boy/’Cept how to get away from home/You won’t learn nothing from the darkness boy/’Cept how to die all alone.” This is an intense song that grabs you from its opening lines. There is something deliciously mean about this song, and it’s one of my favorites. This is the song that gives this collection its name.

“Pancho & Lefty” is one of his most famous songs. It appeared on The Late Great Townes Van Zandt, and it’s been covered by Emmylou Harris, Steve Earle, and Willie Nelson and Merle Haggard. This version is an alternate mix from 1972, without strings and horns. And it’s wonderful. Just let his voice tell you the story. This is a song that I appreciate more each time I listen to it.

“To Live Is To Fly” is one of my favorite songs of all time. It’s a truly incredible and moving song. If you like music at all, you’ll love this song. And this CD set has two versions. Here is a taste of the lyrics: “We all got holes to fill/And them holes are all that’s real/Some fall on you like a storm/Sometimes you dig your own/The choice is yours to make/And time is yours to take/Some dive into the sea/Some toil upon the stone.”  I love the demo version on the second disc. This song perfectly fits the vulnerable, slightly awkward feel inherent in demos.

“White Freight Liner Blues” is another that’s been covered a lot, and has always been a favorite of mine. (I always enjoyed Fur Dixon & Steve Werner’s rendition when they’d perform it in concert.) The version here has a cool rhythm, and a loose feel. This song has such a happy feel to it, such a playful quality, which is even more interesting when juxtaposed with lines like “It’s bad news from Houston, half my friends are dying.” I absolutely love this song.

The first disc concludes with his cover of that great Rolling Stones song “Dead Flowers.” I’ve heard dozens of versions of this song over the years, and nary a bad one. But Townes’ is one of the best. This song is perfect for his voice, his style, his disposition – it’s like it was written for him.  The demo version on the second disc is interesting, but I kind of wish the percussion was cut from it. It’s a bit too peppy, working against the sound of his voice and guitar. In that version, is he singing, “And I won’t forget to put roses on your tail”? Sounds like it; and then he sings the proper line at the very end.

There is a bit of him getting ready at the beginning of the first track on the second disc.  I love that they included that on this disc rather than trimming it. “Heavenly Houseboat Blues” is a song he co-wrote with Guy Clark. I’ve always liked this one.

The second disc also includes a version of “Old Paint,” an old cowboy song with the lines “two daughters he had/One went to Denver, the other went bad,” and “Standin’,” a really good folk tune (“Well, if I hurt you, I did not mean to/I beg your pardon, I did not want to/When I leave you, don’t you think about me/I won’t be back, babe, I’ll be long gone”).

By the way, the second disc ends with an unlisted track (but not a “hidden” track). It’s an instrumental tune, with guitar, and is just over a minute long.


Posted by Michael Doherty at 2:20 PM