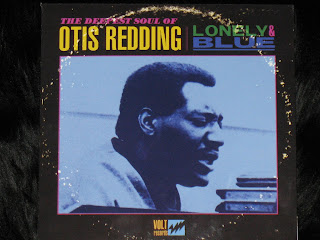 Otis Redding could sing a sad song like nobody else. You can hear it throughout Lonely & Blue, a new collection of some of his most heartbreaking recordings. Listening to the incredibly moving weariness in his voice on the opening track, it’s hard to believe he died at the age of twenty-six. How did so much pain and heartbreak get into his voice in such a short time? And how was someone so young able to express it so perfectly? It feels so natural, so real, that it can’t be an affectation. His is a voice custom-made for songs of heartbreak and longing.

This new collection of songs, Lonely & Blue, seems designed to get right to our hearts, to tear into them. Though not to destroy or hurt us, but rather somehow to make us feel better in our misery. It’s amazing how Otis Redding is able to do that. He’ll fill you with longing and have you smiling simultaneously. For all his cries of loneliness, he makes you feel like you’re not alone.

If you have a girl coming over, someone you’d like to get closer to, put this CD on. If she’s not in your arms by the sixth or seventh track, she’s probably a pod person and you should make every effort to stay awake to avoid a similar fate.

Most of these songs are ones you’re familiar with, but this is not a Greatest Hits collection. These are songs picked for their subject matter and their emotional impact, not for their chart position on the Billboard Hot 100. So while you get “I’ve Been Loving You Too Long,” you also get “Gone Again,” one I wasn’t that familiar with. It’s a great song – I love those bursts of horn on this track. The majority of these songs were written or co-written by Otis Redding himself.

This collection opens with Otis Redding crying out “Please” in “I Love You More Than Words Can Say.” Many of these tracks will find him begging and pleading. And this song’s first line has him asking for something so innocent, you wonder how anyone could turn down his request - “Please let me sit down beside you.” He draws out certain words in this song, like “painful” on “Living without you is so painful.” By doing so, he really makes us feel that pain

On “Open The Door,” he again is saying “please” in the first line - “Open the door, please let me in.” There is such a need in his voice, and he sounds so vulnerable as he repeats “Let me in.” But then his voice becomes forceful later in the song, as he warns at the end, “Or I’ll bust this door down.” And I believe him.

He makes “A Waste Of Time” sound even more personal by including his own name in the song. He sings (in a sort of spoken word style), “I’ve been told by many different girls, Otis, I love you/Oh boy, they tell me this from the bottom of their soul/But they didn’t mean it/Listen, I’ve been let down.” You really feel for him. And if you’ve felt heartbreak ever in your life, Otis Redding knew exactly how you felt. You can hear it in this song, one of my favorites on this CD.

“These Arms Of Mine” is one of the first Otis Redding songs I ever heard, and it stuck with me. It was on a compilation I had in my childhood, and it stood out. It felt truer, more real than the rest of songs on that cassette (yes, cassette).  It felt more personal. This is a beautiful song, and though there is definitely a longing in his voice, this one is not as pained as most of the others in this collection. Oddly, it didn’t reach higher than #85 on the Billboard Hot 100, but did reach #20 on the R&B chart.

Probably the most famous song in this collection, “I’ve Been Loving You Too Long” reached #21 on Billboard Hot 100. It’s an incredible song. He draws you in by lowering his voice, and then picks his moments to really belt out a line.  It’s another song that finds him begging – “I’m down on my knees/And please don’t make me stop now” - and ends with him shouting out “I love you” several times as the song fades. Wow.

“Send Me Some Lovin’” is a happier-sounding love song, at least in the music, if not in his voice. It’s that steady piano that makes it feel more positive and optimistic. And yet he sings, “I need you so bad/I miss you so much/My days are so lonely/Honey, my nights are so blue.”

CD Track List
Lonely & Blue is scheduled to be released on March 5, 2013 on Stax through Concord Music Group. It is also being released on vinyl, which is great. By the way, the CD cover art is designed to resemble a record that’s been in your collection for decades. And this CD will likely remain a staple of your collection for decades to come.
Posted by Michael Doherty at 6:03 PM