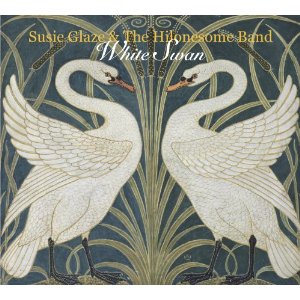 I was turned onto Susie Glaze a few years ago by Fur Dixon, who co-wrote one of the songs on White Swan, the new release by Susie Glaze & The Hilonesome Band.  This bluegrass band is based in Los Angeles and features Susie Glaze on lead vocals and guitar, Steve Rankin on mandolin, Rob Carlson on guitar, Mark Indictor on fiddle, and Fred Sanders on bass.

Susie has a strong voice, and she often sings in her upper registers. That is balanced out on certain tracks by backing vocals by some of the male members of the band. And on two of the tracks, she performs harmonies to their lead vocals. The first of those, “Me And The Eagle,” is a song written by Steve Earle, and sung on this album by Steve Rankin. It’s a really nice rendition, with some sweet playing on fiddle by Mark Indictor. (Steve Earle's original version appears on 2002's Side Tracks.)  The second is “Rockin’ In Your Granddaddy’s Chair,” a tune written and sung by bass player Fred Sanders.

The first track on White Swan begins with a fiddle solo, which is beautiful. This intro is the traditional song, “Si Bheag, Si Mhor,” and it’s a great way to open an album. A minute in, the band comes in to start “Mill Worker,” a James Taylor tune (originally included on his 1979 release, Flag, where it's title "Millworker"). I always liked the lines, “May I work the mills just as long as I am able/And never meet the man whose name is on the label.”

“Little Rabbit” is a really fun bluegrass folk tune written by Robert Ralph Carlson and Fur Dixon. Pick a partner and get up to dance to this one, especially to the instrumental section. I dig Steve Rankin’s work on mandolin. Here is a taste of the lyrics: “What happened to the young girl who was so free and wild/They ran her down and cornered her so she couldn’t run.” “Little Rabbit” is an excellent song, and is my favorite track from this album.

“Fair Ellender” is the only track on this release with a different band – Jon Pickow on mountain dulcimer, Peter Pickow on hammer dulcimer, and Kenny Kosek on fiddle. Susie Glaze begins a cappella, her voice soaring as if over valleys and plains and mountains. Her voice is perfect for this type of song. I hope she tackles more material like this. (This song was originally included on Singin’ The Moon Up.)

“April Fools” is an oddly catchy and kind of delightful tune with a bit of a jazzy feel. Written by Robert Ralph Carlson, this song begins, “I saw you in the spring parade/Flowers in your hair/Folks thought you were foolish/But I fell right then and there/So I put flowers in my hair too/Then I danced with you/That’s how I remember springtime/And two crazy April fools.”  Susie’s vocals on those opening lines have a bit of a 1960s pop feel (which of course is helped by the lyrics about flowers in their hair).

“The Dark Eileen” begins as spoken word, which is surprising. The spoken word section is from a poem by Robert Burns, titled A Mother's Lament For The Death Of Her Son. Susie jumps from the first stanza to the last: “Fate gave the word, the arrow sped/And pierced my darling’s heart/And with him all the joys are fled/Life can to me impart/Death, oft I feared thy fatal blow/Now, fond, I bear my breast.” This is the only song on which Susie has a writing credit (along with bandmates Robert Ralph Carlson and Steve Rankin). And it’s an interesting tune, with a different feel from the other songs – it has a certain understated power. Steve Rankin plays both mandolin and bouzouki on this track.

“White Swan,” the CD’s title track, was written by three of the band’s members – Robert Ralph Carlson, Mark Indictor and Steve Rankin. Here is a bit of the lyrics: “Son, you know it’s wrong/To kill what God made fair/Put away your gun/It’s a sin to kill the swan.” But it’s the instrumental sections I enjoy most. Susie plays mountain dulcimer on this one, and Steve Rankin plays bouzouki. The build and increase in pace toward the end oddly reminds just a bit of “Baba O’Riley” by The Who. Is it just me? It's probably just me.

Posted by Michael Doherty at 4:48 PM