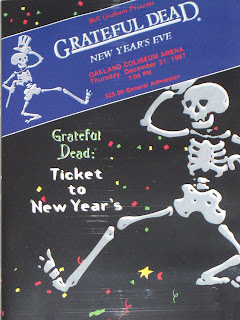 I never had a ticket to a Grateful Dead New Year’s Eve concert. I moved to the west coast in early 1992, and, as it turned out, the last year they played a New Year’s show was 1991 (mainly because Bill Graham died in 1991). So I missed out. However, this DVD of the New Year’s Eve show from 1987 captures some of the magic from those concerts. That year was the year the Grateful Dead gained a much bigger audience, due to “Touch Of Grey,” the band’s only top ten hit.

Ticket To New Year's contains most of the show that the Grateful Dead performed at the Oakland Coliseum on December 31, 1987. It is missing one song from the first set, and nearly all of the third set.

Ticket To New Year’s was originally released on VHS in 1996, and on DVD in 1998. It is now being re-issued by Shout! Factory along with Grateful Dead Productions, Inc.

There is an opening shot of the excited crowd, and the band goes right into “Bertha,” always a great show opener. There’s a wonderful shot of Mickey Hart smiling. Jerry Garcia and Brent Mydland have excellent energy on “Test me, test me, why don’t you arrest me?” and the crowd responds enthusiastically.

Bob Weir then wishes everyone a happy new year. And they go into “Cold Rain And Snow.” (I know what you're thinking - two Jerry songs in a row? Well, this DVD is missing "Promised Land.") Toward the end of this song, some other images are superimposed over the band – water, smoke, trees.

A really good rendition of “Little Red Rooster” features some great stuff from Brent. The first set also includes “When Push Comes To Shove” from that year’s In The Dark. Bob then turns to Dylan for a song I’ve always loved, “When I Paint My Masterpiece.” “Someday everything’s gonna be different/When I paint my masterpiece.”

After that, they play the beautiful “Bird Song,” whose jam is accompanied by some trippy effects with the footage, as well as shots of a lighthouse, a sailboat, a forest, and so on. The shot of Brent smiling after the jam is completely wonderful.

Bob ends the set with “The Music Never Stopped,” which I always loved to dance to. It has such a fun groove, and the lyrics are all about dancing. Bob then tells the audience they have to take a break.

The DVD includes some stuff between sets. Tom Davis has a bit with Jerry Garcia, and Jerry is dressed as a cook, giving a brief cooking lesson. It’s just as goofy as you’re imagining it to be. Then there is footage of various fans asking questions, and the band, seated together, answers them. These are questions about their pets, and the faces Bob makes while playing, and Jerry’s wardrobe, and so on. Check out Bob’s Howard Hughes reference.

And then, because the cook get-up wasn’t silly enough, we have a bit with Jerry dressed as Santa Claus, and Mickey Hart dressed as Spock doing the ol’ mind meld.  And there are more questions from fans.

While balloons fall onto the crowd, the band launches into “Hell In A Bucket,” a tune from In The Dark. And yes, there are shots of Bill Graham as Father Time. The lights are left on for the entire song, which is great, as the audience is as much a part of it all as the band is.

And then they go on into “Uncle John’s Band,” which is always a pleasure to hear. We see shots of the moon, clouds and that sailboat again. That slides right into “Terrapin Station,” one of my favorites. And of course there’s a lot of trippy visuals to accompany this one.

The “Drums” segment is excellent, though I wish we could just watch them play, and dispense with all those quick shots of camels and whatnot. The best footage during this is just of them, with no effects whatsoever. “Space” is really good too, sounding much more together than it sometimes did.

“Space” eases into “The Other One,” which then explodes on the chorus. Fantastic. Later in the song check out Bob’s brief impression of Neal Cassady. The band then does a truly moving rendition of “Wharf Rat.” “I’ll get a new start, live the life I should.”

The second set ends with a passionate “Throwing Stones” into “Not Fade Away.” The encore is “Knockin’ On Heaven’s Door,” with several special guests joining the band. Actually, "Knockin' On Heaven's Door" was the last song of the third set, or encore set.  This DVD sadly lacks "Man Smart, Woman Smarter," "Iko Iko," "Day-O" and "Do You Wanna Dance." It's a shame, because this was the band's only performance of "Do You Wanna Dance."

The DVD has two bonus features: “About The Band,” which is just a bit of information about each band member, and “Dead Head Quiz,” which, by the way, is more difficult than I’d expected it to be. This isn’t your typical easy DVD fluff quiz. There were a couple that I got wrong.

Ticket To New Year’s is scheduled to be released on February 12, 2013.
Posted by Michael Doherty at 1:09 PM