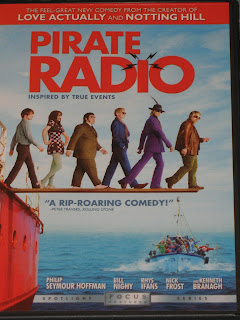 Howdy, folks. One thing I haven’t really done yet with this blog is mention some of the great films that are related to music. It hadn’t really occurred to me until just now when I watched Pirate Radio, a wonderful film that really celebrates rock and roll. It was written and directed by Richard Curtis (who was one of the creative minds behind Blackadder, a favorite show of mine; he also wrote Four Weddings And A Funeral). And it boasts a tremendous cast, including Bill Nighy, Philip Seymour Hoffman, Rhys Ifans, Nick Frost, Kenneth Branagh, Jack Davenport, and Emma Thompson.

But what is most important, perhaps, is the music, and the way the film uses music.  It truly is a celebration of rock and roll, and music in general (well, good music anyway). As it takes place in 1966-1967, there is some great stuff by The Rolling Stones, The Who, The Kinks, Procol Harum, Otis Redding, Jimi Hendrix and The Yardbirds. It’s not just rock and roll, however, and of I was particularly happy to hear “So Long, Marianne” by Leonard Cohen. I’m a big lover of vinyl, and it’s definitely a bit difficult to watch a sequence toward the end of the film when records are… well, being damaged. But don’t let that keep you from watching this movie, as it’s a whole lot of fun.  This is a movie you’re going to want to watch with the sound turned up quite a bit.

And be sure to watch the hour of deleted scenes with the introductions by Richard Curtis. One scene in particular will remind you of what a great song “Get Off Of My Cloud” is. And Richard Curtis recounts some of his early memories related to The Beatles. Very cool.

Enjoy.  Oh, one other thing: See how many of the albums from the closing credits are in your collection. As far as I can tell – and some of them go by pretty quickly – I have only thirty-three. (How do I not own Astral Weeks?)

Posted by Michael Doherty at 1:48 PM