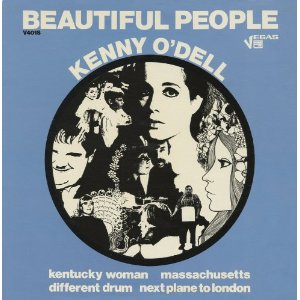 Known primarily for his songwriting – he wrote Charlie Rich’s “Behind Closed Doors” and The Judds’ “Mama He’s Crazy” – Kenny O’Dell also recorded a few albums and several singles of his own in the late 1960s and 1970s. Now Real Gone Music and Varese Sarabande Records are re-issuing his first album, Beautiful People (1968), along with several bonus tracks.

I’ve long been drawn to music of this period, yet had not heard these recordings before. So it’s a treat to get to listen to them. Though there is nothing particularly innovative or ground-breaking about these tracks, they are nonetheless good late 1960s pop, and are mostly fun and enjoyable. And of course they are certainly of interest to music fans.

The album opens with “Beautiful People,” the title track, which is a fun little pop tune and a sweet love song. Kenny O’Dell sings, “You’ve just gotta be one of the most beautiful people in the whole wide world/It’s true, it’s true, it’s true/And I love you.” There is even a “la-la” section. Is it a bit cheesy? Sort of, but it totally works. This song was released as a single, and reached #38 on the pop charts. (This song was also a hit for Bobby Vee And The Strangers at the same time.)

The flip side to “Beautiful People” was “Flower Girl,” and it sounds exactly like what it is, an attempt to cash in on the Summer of Love. But perhaps that is just what makes it an interesting song, in a historical sense.  It definitely feels like an outsider’s view of the hippie thing, rather than something that came from within the scene. “Flower girl, can you love me/Flower girl, will you stay/Flower girl, I will take good care of you if you want me to.”

My personal favorite track from this record is “You’ll Break Me Yet.” It has more of a country feel (perhaps a hint of things to come from Kenny O'Dell), and is a fun tune with some nice guitar work. This is a really good song about knowing what you’re in for, but not being able to avoid it. Here is a taste of the lyrics: “You’ll break me like all the ones before/All because I ain’t got sense to walk out the door/Many are the times I’ve tried to walk away.”

The original album concludes with “If My World Falls Through,” a cool pop tune. I dig the chorus, with the backing vocals echoing him: “If my world falls through/Blame it all on you/And if my sun goes down/It’s because you’re not around.” Plus, there are some interesting and surprising touches.

For someone known for his songwriting, Kenny O’Dell features several cover songs on this album, including a pretty good version of the early Neil Diamond song “Kentucky Woman.” He also does a cover of “Different Drum,” which was written by Michael Nesmith and was a hit for the Stone Poneys. He does a good job with it, and I like the backing vocals.

Maybe the most interesting cover is K. Walker’s “Sunshine Dreamin’,” which has kind of a cool, relaxed feel (think Mamas & The Papas meet Donovan or The Lovin’ Spoonful). Here is a taste of the lyrics: “Catch a ride on a butterfly/If he’ll take you along/Sunshine dreamin’/It’s the thing to do/How about you?”

Kenny O’Dell also covers “Massachusetts.” He doesn’t quite have the vocal range of the Bee-Gees, but this is still a worthwhile rendition. By the way, the line “And Massachusetts is one place I have seen” has always struck me as comical. Does anyone else find it funny?

This special re-issue of Beautiful People includes several bonus tracks, all singles from 1968 and 1969. The first is “Springfield Plane,” which reached only #94 on Billboard Hot 100. This song was co-written by Harold Gay, and is about a plane carrying him home to L.A. and to his woman.

“Happy With You,” the second single, is pretty tame, particularly for 1968, a year when music was reaching all sorts of new territory (think of Anthem Of The Sun and The White Album). This one starts, “Happy with you because you’re groovy/Satisfied too because you move me/Happy with you when you’re making me smile, making me glad, making me cry, making me mad.” Its flip side, “I Could Love You,” is a much better song. In this one, he sings, “I could love you and it would be so right/A puzzle with the parts all in place/Let it happen, and you will see it too/That everything is groovy/I could love you.”

“Bless Your Little Heart,” the third single, is a somewhat strange (and completely adorable) song written by Mitch Murray and Peter Callander. In this one Kenny O’Dell sings, “In the middle of a love affair/She went and left,” but then, “Now you’re by my side/The world is wide/The future is smiling/Bless your heart for loving me.”

CD Track List
Beautiful People is scheduled to be released on February 12, 2013 through Real Gone Music.

Posted by Michael Doherty at 5:26 PM