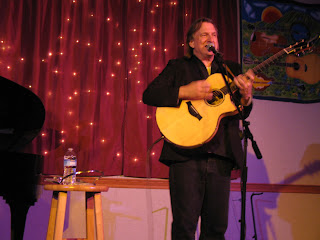 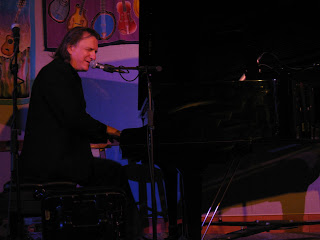 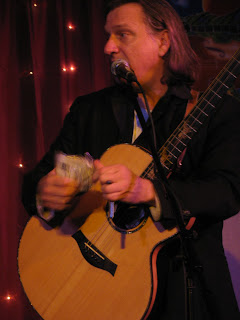 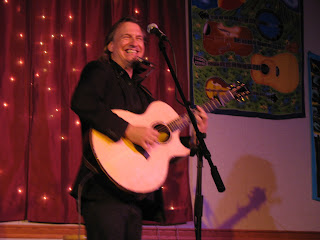 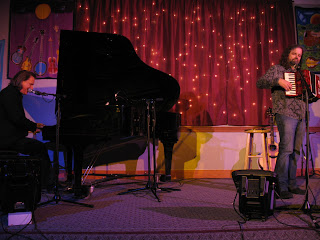 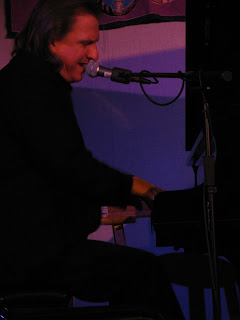 Music has always played an important part in my life. When I was 8 or 9, our class went to something called (as I recall) Project Adventure. During the day, we’d climb walls, swing on ropes and go on hikes. And at night, one of the counselors brought out a guitar, and we’d all sing. The two songs I remember the counselors choosing were Cat Stevens’ “Moonshadow” and Joni Mitchell’s “The Circle Game.”

Several years later I saw a film called The Strawberry Statement, based on James Simon Kunen’s book, and that movie opens with Buffy Sainte-Marie’s version of “The Circle Game.” From those opening moments, I knew I would love the film.  That song has really been important to me.  It’s always felt both sad and hopeful to me, a combination I love in music.

On Saturday, Ellis Paul performed at the Grant R. Brimhall Library in Thousand Oaks, California, and he opened his second set with “The Circle Game.” It was a sweet rendition, and was one of many highlights from the show.

He began the show by saying, “I’d like to introduce the band. Radoslav Lorkovic.” He’s used that joke several times, but it always gets a laugh. And of course it’s always great to see Radoslav play. He was on piano and backing vocals for most of the show, but also played accordion on a few songs.  Ellis then kicked off the show with a relatively new song called “Chasing Beauty.”

A little later in the first set Ellis and Rasoslav joked about performing in a library, about asking for audience participation in a place where usually folks are reminded to hush. Also, “This is not a drinking establishment.” Then, “We encourage drinking everywhere.”  They then did a seriously fun version of “Kick Out The Lights,” with the audience singing its part. This song featured some excellent stuff from Radoslav on piano.

They followed that with another fun, energetic tune, “Alice Champagne Palace.” And then Ellis told a great story about his new guitar, Guinness. He began that story by mentioning another guitar that he had seen at McCabe’s in Santa Monica, a guitar that he really wanted, but which was eventually bought by Neil Young.

Before playing “Woody Guthrie, Working Man,” Radoslav took out the accordion, to which the audience applauded, leading Ellis to laugh and ask, “When did accordions become sexy?”  “Woody Guthrie, Working Man” is a track off of Ellis Paul’s second children’s record, The Hero In You, which came out last year. He played another song from that album in the second set – “Chief Joseph.”

The first set ended with “Walkin’ After Midnight” into “Things Change” back into “Walkin’ After Midnight.” Near the beginning of the song, Ellis broke a string, and managed to change it during “Things Change,” the humor of which was not lost on anyone. Radoslav kept the song going on piano, and played an excellent solo, and Ellis had the string changed before the end of the tune.

The second set was a bit shorter, and featured two songs from Ellis Paul’s Christmas album, City Of Silver Dreams, though – yes – it’s February. One of those songs, “Snow In Austin,” he’s been performing for many years now. At the beginning of that one, he played a bit of “The City Of New Orleans” and “Mr. Bojangles.”

He ended the second set with “Take All The Sky You Need” (one of my personal favorites) and “Jukebox On My Grave.”  The encore was “The Night Hank Williams Came To Town.”

Posted by Michael Doherty at 2:41 PM