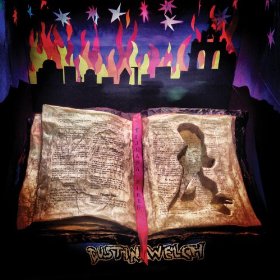 Dustin Welch’s second album, Tijuana Bible, is a wild collection of original songs with some great energy. His voice has something of the wise-ass in it, something of the prankster – but oddly without any bullshit – like he’s going to make up a story, but by the end, it will be the total truth.

There are moments when his vocals remind me a bit of other singers (such as Tom Waits on “Lost At Sea,” Tom Petty on “Across The Rubicon” and Lou Reed on “Goodbye”), but Dustin Welch still manages to have his own style, his own take on the world. And that’s what keeps us interested. This is an album that keeps the listener engaged throughout.

There is a good variety of songs here. “Things I Cannot Change” is loose, bluesy folk. Some tunes are closer to straight ahead rock, like “Across The Rubicon.” “St. Lucy’s Eyes” is a slower, mellower tune. “Sparrows” has something of a folk feel, but still with a full sound. That track’s instrumental section led by piano and violin is really nice. My particular favorites are “Ash & Iron,” “Lost At Sea” and “Tango Blues.”

Tijuana Bible opens with “Ash & Iron,” a song that begins with a seriously good groove, and then just builds from that. There is some nice work on guitar early on, and when the vocals first come in, they’re like a chant. This song has a power, and a great kick, but it’s Dustin Welch’s vocals that really make the song something special. They’re aggressive and intense, but with poetry as well as authority. Check out these lyrics: “Outside I hear the shutters banging in the howling wind/So dark the shadows are that close me in/Well, lately I’ve been feeling like there’s no one I can trust/Everything that I’ve got left I’ve left to rust.”

“Ash & Iron” was written by Dustin Welch and Kevin Welch.

“Lost At Sea” has a wonderfully twisted, haunted feel to it, like a carnival teetering on the edge of damnation. Dustin Welch sounds a bit like Tom Waits, the way he just delivers a lyric with a force while seeming not to worry much about the “correct way” of doing things. Here is a bit of the lyrics: “My head is filled with blood/The voices ringing in my ears are those of every woman I have loved/But I will not set foot upon the mountain/Though I know it must be such a sight to see/Well, I will turn my face the wrong direction/This would be a good day to get lost at sea.”  And the violin really adds to the special sound of this track.

Nathan Singleton provides backing vocals on this song. “Lost At Sea” was written by Dustin Welch and Jeremiah Nelson.

“Jolly Johnny Junker” is more of a rock tune, with a steady beat and a bit of a brighter feel. It’s perhaps the instrumental sections that are my favorite moments of this one. Kayla Welch provides backing vocals on this track. “Jolly Johnny Junker” was written by Dustin Welch and Mark Germino.

There’s a bit of Lou Reed in Dustin’s vocal delivery on “Goodbye.” This is an oddly uplifting and comforting song. Here is a taste of the lyrics: “I hope your journey is safe, my friend/And paradise is where it ends/Oh, the pain in our hearts, it won’t go away/I know I’ll miss you every day/And I know that we’ll all meet again/Though I don’t know where and I don’t know when.” My favorite sections, however, are the instrumental moments - the violin over that steady snare actually sounds pretty.

“Goodbye” was written by Dustin Welch and Zander Cox.

“Tango Blues” has a seriously cool instrumental intro that sounds from another time and place, and makes me fall for this song immediately. Bukka Allen plays accordion on that intro.  There is then an abrupt change as the song kicks in, and it becomes a wild and intense beast. This one really wowed me. It has an impressive force.  This song is totally delicious.

The album concludes with “Tijuana Bible,” the CD’s title track, which has a really interesting sound. There is this cool relentless drive to this song. I absolutely love the piano lead section, and the way the violin builds beneath it.  It’s enough to get you dancing, but there is also something dark about it, which will affect the way your body moves. Yeah, I dig it.

Tijuana Bible is scheduled to be released on February 12, 2013 on Super Rooster Records.

Posted by Michael Doherty at 1:44 PM