Reason To Believe: The Songs Of Tim Hardin (2013) CD Review 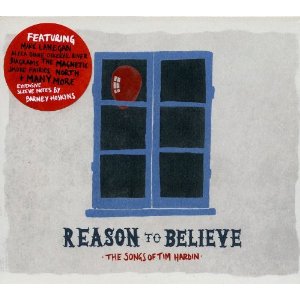 A lot of folks are unfamiliar with the name Tim Hardin. But they know his music, thanks mainly to Rod Stewart’s version of his “Reason To Believe” and Bobby Darin’s version of “If I Were A Carpenter.” Actually, both of those songs have been covered by many artists. Because so many people learn of Tim Hardin through covers of his songs, it makes complete sense to release a compilation of artists covering some of his best material. Reason To Believe: The Songs Of Tim Hardin features thirteen tracks by thirteen different artists (although Hannah Peel appears twice, once as a solo artist and once as singer of The Magnetic North).

There is not a weak track here. And yes, that’s because of the material, but it’s also due to the interesting directions many of these artists take with these songs. A lot of these tracks are on the mellow side, yet are incredibly powerful. Check out Gavin Clark’s version of “Shiloh Town,” for example. And listen to that haunting vocal performance on Alela Diane’s rendition of “How Can We Hang On To A Dream.”  All of these artists let the lyrics drive the songs. That is, the vocals are not lost in the productions. Artists featured in this collection include Mark Lanegan, The Phoenix Foundation, Smoke Fairies, Okkervil River and Hannah Peel.

Most of the songs these artists chose to cover are from Tim Hardin’s first two albums. Tim Hardin died in December of 1980, of a drug overdose.

This interesting, and somewhat simple arrangement of “Don’t Make Promises You Can’t Keep” by The Phoenix Foundation has a sweet, pretty sound, with kind, nearly angelic-sounding vocals. This song was originally included on Tim Hardin 1. Here is a taste of the lyrics: “You promised me things that I need/But then the things behind it/Took away the chance forever/You’re telling me lies in your sleep/Do you think I’m not aware of what you’re saying.” I really like this rendition.

The Phoenix Foundation is a band from Wellington, New Zealand. They formed in the late 1990s.

“Reason To Believe” is, of course one of Tim Hardin’s most famous compositions. And on this collection, The Sand Band does an excellent country version. David McDonnell’s vocals have just the right amount of sadness mixed with hope. And Scott Marmion’s work on pedal steel is really good. Of course, this is such a great song, it’s hard to imagine anyone messing it up.

Tim Hardin included “Reason To Believe” on Tim Hardin 1. For the two or three people who aren’t familiar with this song, it opens with these lines: “If I listened long enough to you/I’d find a way to believe that it’s all true/Knowing that you lied straight-faced while I cried/Still I look to find a reason to believe.”

“Red Balloon” is a powerful folk song that, as the liner notes suggest, is about heroin – “Bought myself a red balloon, got a blue surprise/Hidden in the red balloon, the pinning of my eyes.” This song has always made me sad. This version by Mark Lanegan features some seriously nice, raw work on acoustic guitar. Mark Lanegan is known for his work with the Screaming Trees and Queens Of The Stone Age, as well as for his solo career.  He had previously included a cover of Hardin’s “Shiloh Town” on his 1999 release, I’ll Take Care Of You.

“If I Were A Carpenter”

“If I Were A Carpenter” is probably Tim Hardin’s most famous song. It has been covered by a wide variety of artists of the years, including Johnny Cash, Bob Seger, Willie Nelson, Leonard Nimoy, Dolly Parton and Robert Plant. And it was a top ten hit for Bobby Darrin in 1966. On Reason To Believe, the Smoke Fairies do a seriously cool, somewhat heavy rendition of “If I Were A Carpenter.” I really like the work on keyboards in this version. Smoke Fairies are a British band formed by Katherine Blamire and Jessica Davies.

“If I Were A Carpenter” was originally included on Tim Hardin 2.

Irish singer/songwriter Hannah Peel covers “Lenny’s Tune.” She has an unusual take on this song – it’s oddly part lullaby, and as such, it’s a bit eerie, yet there is a strange beauty to it.  This one begins, “I’ve lost a friend, and I don’t know why/But never again will we get together to die/Why after every last shot was there always another.” Lenny Bruce died of a drug overdose in 1966. This song is sometimes also called “Eulogy To Lenny Bruce.”

CD Track List
Reason To Believe: The Songs Of Tim Hardin is scheduled to be released on February 26, 2013 on Full Time Hobby. It will also be available digitally starting on February 12, 2013.
Posted by Michael Doherty at 2:14 PM