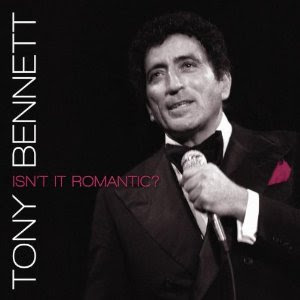 Isn't It Romantic? is a compilation album featuring some of the best stuff Tony Bennett ever recorded. It's an album full of what he does best - beautiful, passionate, honest love songs. And he's accompanied by some of the world's best musicans, particularly Bill Evans on piano.

These tracks are taken from five albums: Sings 10 Rodgers & Hart Songs, Sings More Great Rodgers And Hart (those two were later released as a single CD titled Sings the Rodgers & Hart Songbook), Life Is Beautiful (1972), The Tony Bennett/Bill Evans Album (1975), and Together Again (1977). Six of these tracks were also re-issued last summer on The Best Of The Improv Recordings. And if you purchased the four-disc box set, The Complete Improv Recordings, then you already own all but six of these tracks, those six being the ones from The Tony Bennett/Bill Evans Album (because that album was originally released on Fantasy). However, if you don't already own any Tony Bennett, this is a really good place to start.

Isn't It Romantic? starts off with "Make Someone Happy," a beautiful, mellow rendition featuring just vocals and piano. Tony Bennett's voice just radiates romance as he sings, "Love is the answer/Someone to love is the answer/Once you've found her/Build your world around her/Make someone happy/Make just one someone happy/And you will be happy too." That's pretty good advice. And Bill Evans' solo is wonderful - it's what really makes this a phenomenal rendition.

"Make Someone Happy" was written by Betty Comden, Adolph Green and Jule Styne. This version was originally included on Together Again.

"Isn't It Romantic?" starts with a sweet bit of horn before the cool bass line and Tony Bennett's vocals come in. Tony's voice is like a wonderful whisper in your ear. This song is so good that it's almost a worthy substitute for actual romance. Written by Richard Rodgers and Lorenz Hart, this is the kind of song that makes you want to dance with a stranger you pass on the street. A definite highlight of this compilation.

"As Time Goes By"

"As Time Goes By" is one of the most famous songs ever written. And there's a good reason for that, and for its continuing appeal. This song will never lose its magic, as "moonlight and love songs are never out of date." This song, like its subject, will always be pertinent, always be welcome (unless we completely lose our humanity). And Tony Bennett's rendition is perfect. "As Time Goes By" was written by Herman Hupfeld.

Tony's voice and Bill Evans' piano sound so great together on "My Foolish Heart." This one has a late-night feel. Both Tony and Bill are able to easily evince the kind of experience that makes a song like this one so effective. You can hear it in a line like, "I'm reluctant to start for we've been fooled before." And, "This time it isn't fascination/Or a dream that will fade and fall apart/It's love, this time it's love, my foolish heart." In addition to the experience you hear in his voice, there is also the hope for this new love.

"My Foolish Heart" was written by Ned Washington and Victor Young.

"I Could Write The Book"

"Days Of Wine And Roses"

Bill Evans starts "Days Of Wine And Roses," playing for nearly a minute before Tony begins singing. This is another of those late-night gems. You can imagine the bartender wiping the counter, getting ready to close, and Tony singing this one last song to you, the last remaining patron. It's such a short song, however, seeming to end too soon.

Written by Johnny Mercer and Henry Mancini, this track was originally released on The Tony Bennett/Bill Evans Album.

"Lover," a pretty song written by Rodgers and Hart, features the great line, "When you're away, it's awful/And when you are with me, it's worse." There is a section of this rendition that is just so damn cool, in which Tony takes his voice down to a low near-whisper, holding back, over this great groove on bass and guitar. So intimate, as he sings, "Lover, when I'm near you/And I hear you speak my name/Softly in my ear/You breathe a flame." This is my favorite track. It was originally released on Sings 10 Rodgers & Hart Songs.

"My Romance" is another seriously cool tune with a great mellow jazzy vibe. Tony sings that his romance needs "no soft guitars" - ah sure, but they don't hurt, as this song proves. He sings, "Wide awake, I can make my most fantastic dreams come true/My romance doesn't need a thing but you." Written by Rodgers and Hart, this songs was originally included on Sings More Great Rodgers And Hart. I love the instrumental section in this rendition.

This compilation concludes with "Life Is Beautiful," a sweet, comforting, uplifting song that somehow manages to avoid being the least bit cheesy. Here is a taste of the lyrics: "Life is beautiful in every way/Life is lovely as a spring bouquet/Since I fell in love with you/Life is like a dream that has come true." The orchestra is perfect, with an arrangement by Torrie Zito. "Life Is Beautiful" was written by Fred Astaire and Tommy Wolf.

CD Track List
Isn't It Romantic? was released on February 7, 2012 through Concord Music Group.
Posted by Michael Doherty at 12:52 PM