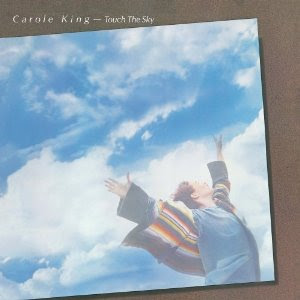 Carole King's 1979 release, Touch The Sky, has quite a different sound from her previous release, 1978's Welcome Home . This one features an obvious country influence, particularly in a song like "Passing Of The Days." Her band for this album was made up of members of Navarro and members of Jerry Jeff Walker's band. Like Welcome Home, this album has not previously been available on CD in the United States except as expensive import (which is completely crazy). My favorite tracks are "Move Lightly" and "Dreamlike I Wander."

There is no title track, but the opening track, "Time Gone By," comes close with the line, "We followed inner visions and touched the sky." "Time Gone By" is a good tune that recalls the days when people were guided by dreams and lofty goals, and is a song for those who haven't lost that drive. In 1979, that longing for those heady days of a decade earlier must have been pretty strong. And things were only going to get worse, as we moved into the Reagan years. (Geez, why am I thinking about that bastard now, especially while listening to Carole King?) Carole King plays piano on this track.

"Move Lightly" has a bit of a funky thing in the bass line and a simple drum beat. It's like a dance song slowed down. It's actually a seriously cool tune, one of my favorites from this release. Here is a bit of the lyrics: "That's a hard and heavy foot/You've been usin' to put yourself down/Why don't you walk softly/If you win the world and lose your soul/What good will it do you - love don't come from gold." I love Carole King's vocals. There is a certain rough quality that sneaks in at times that is just perfect.

"Dreamlike I Wander" is a wonderfully sad song of longing and loneliness. Her husband, Rick Evers, had died the year before this album was recorded, and it's impossible not to think of that when hearing Carole King sing lines like, "Dreamlike I wander through my life without you." And, "All I know is another night is over/And my bed is empty and cold/I can't forget you/Can't set myself free/I hope you find peace of mind/It's too late for me." This is a beautiful tune, with something of a country feel, particularly in the guitar. It's another of this CD's highlights.

"Good Mountain People" has an upbeat country bar feel, which fits the lyrics - "Good mountain people - they sure know how to have a rockin' good time." This song features some wonderful work on keys by Reese Wynans (though that lead section is too brief).

"You Still Want Her"

"You Still Want Her" is an interesting song about being in love (against one's better judgment) with a woman who is a bit of a wreck. Carole sings, "You don't think she's gonna last another winter/With all the snow she's rakin' in." And the song has a decidedly female perspective in the lines, "But you've always thought your love for her could save her/And that's how you get taken in." Carole King plays piano on this one.

"Crazy" is a pretty fun country rock tune. Mostly I like it for the lines, "I may be crazy/But I've been crazy for a long, long time." Okay, then. Carole King is on piano, and there is also saxophone, which comes a surprise in this song.

Touch The Sky concludes with "Seeing Red," a mellow tune. Carole's vocals have a raw power that at times approaches Kim Carnes territory. This song also features some nice work on guitar.

Touch The Sky is scheduled to be released on February 28, 2012 through Rockingale Records and Concord Music Group. Also scheduled for release on that date are three other Carole King albums: Simple Things, Welcome Home (neither of which have been previously available on CD in the United States) and Pearls: Songs Of Goffin And King.
Posted by Michael Doherty at 12:43 PM