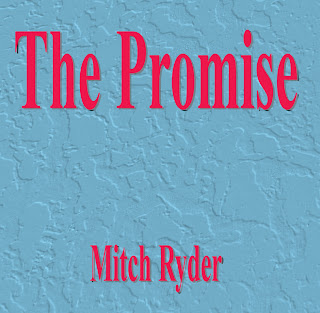 Like a lot of folks, I know Mitch Ryder primarily for his incredibly energetic covers of great rock and roll tunes, covers that sometimes eclipsed the originals. So it's a total treat to hear his new CD, The Promise, an album made up almost entirely of original material.

This is his first U.S. studio release since 1983's Never Kick A Sleeping Dog. And it's seriously good. Produced by fellow Detroit native Don Was, this album features rock tunes infused with funk and soul. I really dig his voice, and the years haven't hurt him. It's the voice of a true rock and roll spirit. And he's not afraid to tackle the topic of aging in this batch of songs. For example, in "Thank You Mama" he sings, "Now that I am older, it seems that life keeps testing me/Sometimes I get weary if it ain't what it should be." The first line of "One Hair" is "I am getting older," "Crazy Beautiful" also finds him singing "We grow older." But these songs aren't full of weariness or regret. They're mostly positive and hopeful.

The Promise kicks off with high-energy bluesy, funky little gem titled "Thank You Mama." It's a tribute to his folks, and sure it's a bit emotional, but not sappy. And there's a good lead guitar part by Randy Jacobs over a great groove by Reggie McBride on bass. Mitch sings lines like "Yes, I miss you/Thank you for the price you paid" and "Wish the two of you were here." It might seem an unusual topic for a rock song, but it totally works, and "Thank You Mama" is one of the CD's best tracks.

The album's title track starts off right with a cool bass line and some nice percussion. Mitch Ryder sings, "Loving for the sake of love/Helped us live through that last dark night." This song has a positive attitude about the future, featuring lines like "My child will have doctors/My child will have good schools/My wife will have medicine/My work will have good tools" and "I see change and I'm feeling stronger/There's nothing left to fear." There is a religious angle to the song, but it doesn't get in the way. It mentions prayers, plus the line "We thank the one that brought us here."

"One Hair" has a good funky rhythm, and is actually a song about dancing, rocking and grooving as one gets older. He sings, "I want to dance, but my legs they do their own thing." And he admits, "And I do get a little edgy when my routine falls apart." He touches on subjects I don't often hear sung about in rock tunes (in this, and other songs). And again, there is a positive outlook in lines like "There is no limit to what we'll be given." And this line made me laugh: "Let's have a party where everybody's shaking/And not from some bad physical disease." Images of a nursing home rave popped into my noggin.

"My Heart Belongs To Me"

"My Heart Belongs To Me" is actually an older tune, which Mitch Ryder first released on Got Change For A Million? (1981). It's a fun rock tune with a good dose of soul. And with some odd lyrics: "My heart is a muscle hard as a rock/You can't steal it from me, girl, or pick it like a lock." This newly recorded version has a great sound, retaining the sense of play from the original (it's a bit more soul, a bit less pop than the original version).

Exactly what is he singing about in these lines: "There's only one muscle for the loving you need/It can satisfy you, it can make you bleed/So if you're getting lonely and you want a little loving/Take this muscle special-built for pushing and a-shoving." Still the heart?

Mitch Ryder changes the tempo again on "Let's Keep Dancing," which has a wonderful Latin groove (I love the percussion). There is also some truly interesting vocal work on this one, different from that on the other tracks. The vocals really impress me on this CD. I also really like the repeated keyboard line toward the end of the song.

"If My Baby Don't Stop Cryin'"

"If My Baby Don't Stop Cryin'" is a very odd and fun little rock tune whose lyrics feature wet panties. Really. Here is a taste of the lyrics: "If my baby don't stop crying, I will walk away/There ain't no reason for that baby to cry/Every time her panties wet I buy her new ones dry." So I think it's about an actual baby. But then he sings, "If my baby don't stop buying, I will walk away/She keeps on shopping 'til she 'bout to drop." So now I just don't know what to think. Is it about a girlfriend? Maybe his daughter gets older as the song progresses? Either way, the song has a simple, catchy rhythm. From some reason, the idea of just walking away from a crying baby makes complete sense to me.

"What Becomes Of The Broken Hearted"

The album's sole cover song is also the album's only live track. It is a bit odd to throw a live song in, and it seems out of place, especially as it's clearly the last song of the set. Toward the end of the song we hear, "I want to thank you all for coming tonight." And then: "Give it up for the great Mitch Ryder." Who is saying this? That being said, it's a decent rendition. But it really breaks up the momentum of the album. I personally would have left it out.