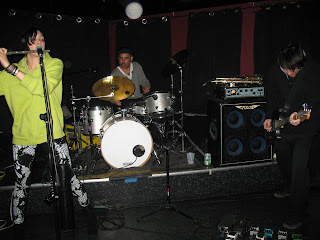 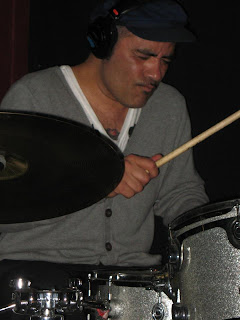 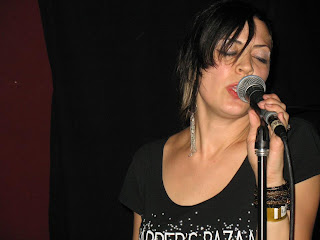 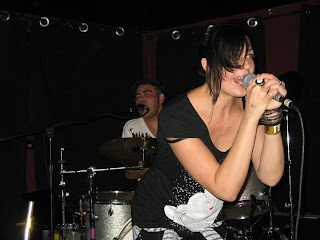 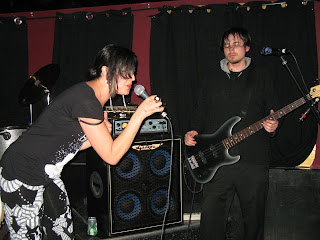 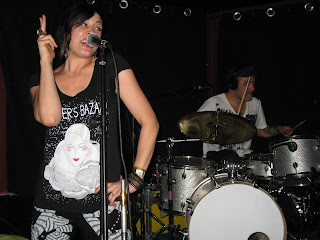 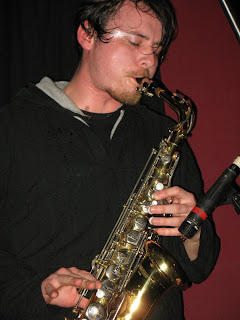 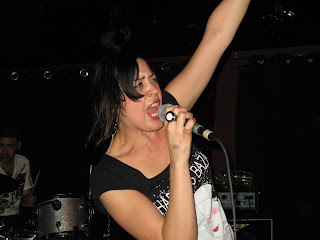 Bullied By Strings returned to Los Angeles Saturday night for a show at On The Rox. Formerly based here in L.A., and now based in Chicago, Bullied By Strings is a fantastic, strange, wonderful pop-punk-electronica group consisting of Kristen Rajterowski Rowland on vocals and flute, Gabriel "Front Row" Roland on drums and programming, and newcomer Mike Guidry on bass and saxophone and backing vocals.

Before their set, a DJ was spinning records, and Gabe got behind his kit and began playing along with the songs. This led into a short drum solo as Kristen and Mike joined him on stage.

They went on at 11 p.m., and actually opened with a cover of the Beatles tune "Things We Said Today." It was a great version. They had posted their version of it online, so it didn't come as a surprise, but still came as a delight. They then went into their original material, starting with one of their older songs, "Big Mouth." Always a pleasure to hear that one. They mixed in some newer material too, like "You Lift Me Up So High," "Breathe New Life" and (maybe my favorite) "Oh Boy Oh Boy."

They ended their set with a couple of classics - "What If I Like It" (in a different configuration than before, but still fantastic, and a great song to dance to) and "Reach Out." "Reach Out" always is a high-energy tune, and finds Kristen contorting her body is all sorts of impossible ways. They didn't do the extended ending with the hand percussion in front of the stage like they used to, but it was still an excellent version of the song, and had the crowd dancing and calling out for an encore (which they didn't get).

Set List: 2-11-12 On The Rox, West Hollywood, CA
I love this band, and I hope they move back to Los Angeles at some point. For those who are unfamiliar with Bullied By Strings, you might remember Salon K, the band Gabe and Kristen were in prior to this one. And of course Gabe was in one of the greatest bands of all time, The Peak Show.
Posted by Michael Doherty at 7:04 PM