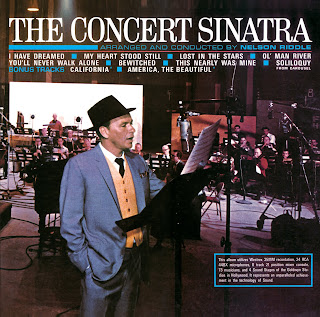 The title of this record might seem a bit misleading, at least to us nowadays who think of a "concert" as a live performance. This is not a live album; that is, there is no audience. It was recorded with a large orchestra in a soundstage at Samuel Goldwyn Studios in February of 1963. This album is made almost entirely of compositions by Richard Rodgers and Lorenz Hart, and Richard Rodgers and Oscar Hammerstein. This special re-issue contains two bonus tracks.

This album is not the type of Sinatra record I usually listen to - it's not Sinatra with a big band. This is him with an orchestra, and so it's a very different sound. But of course it's really about his vocal performance. These songs were arranged and conducted by Nelson Riddle.

This edition of the album was produced from the original recordings, which had been stored in film canisters for approximately fifty years. The recordings went through a digital restoration process, and the results sound pristine.

The Concert Sinatra opens with "I Have Dreamed," a love song written by Richard Rodgers and Oscar Hammerstein for The King And I (1951). This recording really highlights Frank Sinatra's great voice, which sounds so comforting in this configuration, backed by an orchestra. His voice really stands out, although perhaps the orchestra gets a bit too powerful at the end - it's better backing him than competing with him.

"My Heart Stood Still," written by Richard Rodgers and Lorenz Hart, features the perfect lines, "I took one look at you/That's all I meant to do/And then my heart stood still." This song really needs no other lyrics than those (though the rest are wonderful). Originally written for A Connecticut Yankee, Nelson Riddle's arrangement on this version is beautiful.

Frank Sinatra gives us an excellent, slow version of "Ol' Man River," the famous song written by Oscar Hammerstein and Jerome Kern for the musical Show Boat. Though it is a bit odd hearing Frank Sinatra sing, "Let me go away from the white man boss," I really love this rendition. My favorite moment is when the orchestra disappears entirely and Sinatra holds onto one word on the line, "You get a little drunk and you lands in jail" - just the way he sings the word "jail" and holds onto it. It's a fantastic moment, probably my favorite bit on this record. The song then builds again, becoming gloriously intense. And boy, what a vocal performance. This is a definite stand-out track - so powerful that I'm surprised when the album continues. It feel it should be over after that.

As great as "Ol' Man River" is, by far my favorite tune on this album is "Bewitched." It's fun, playful, and yet also beautiful. And Sinatra's vocal performance is absolutely wonderful and moving. Richard Rodgers and Lorenz Hart wrote this one for Pal Joey in 1941 (on the soundtrack, its title is "Bewitched, Bothered And Bewildered"). Here is a taste of the lyrics: "I'm wild again/Beguiled again/A simpering, whimpering child again/Bewitched, bothered and bewildered am I."

The original album concluded with "Soliloquy," a strange rumination about fatherhood. This song finds Sinatra carrying on about the son he's expecting and what sort of person he'll be. And then nearly five minutes in, it occurs to him, "What if he is a girl?" The song changes then, and he creates the child all over again, this time as female. According to the CD's liner notes, when Sinatra first heard this song, he had recently become a father, and the song really stood out for him. "Soliloquy" was written by Rodgers and Hammerstein for Carousel.

This special re-issue contains two tracks not included on the original release. The first is "California," written by James Van Heusen and Sammy Cahn, a love song to the state. According to the liner notes, this song was written for a Sacramento gala, and was issued on a 45 and given to those who attended. Wow, what a great bit of swag! It would have been worth sitting through whatever political speeches were given in order to get a copy of it. But here it is now, for everyone to enjoy.

The second bonus track is "America, The Beautiful," a song I've never cared much for. I'm among the least patriotic people you'll ever meet. Still, this is a good rendition, with a choir and everything. And of course this is a much better song than the National Anthem.

CD Track List
This special re-issue of The Concert Sinatra was released on January 17, 2012 through Concord Music Group.
Posted by Michael Doherty at 5:12 PM