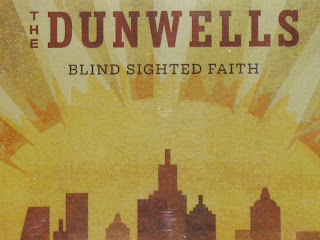 The Dunwells are a relatively new British band featuring two brothers on guitars and vocals. In fact, in October of last year, they changed their name from The Dunwell Brothers Band to The Dunwells. Blind Sighted Faith is the band's debut CD.

Their sound has clear Celtic influences (at times they remind me a bit of Flynn). But a heavier influence on this band seems to be the 1970s soft rock groups, the ones that focused on harmonies like Crosby, Stills & Nash, Poco, Little River Band and Seals And Croft (You can really hear that influence on a track like "In The Moment").

Of course it's not enough to just have excellent vocals - there needs to be something worth singing. The Dunwells seem to spend just as much time and energy on their lyrics as they do perfecting their vocal chops. Take the first line of "Hand That Feeds" for example: "I'm not afraid of falling, I just don't want to hit the ground." Deceptively simple, these lyrics work like the best lyrics, by being non-specific enough to feel applicable to everyone who listens. Thus, it's a song that a listener can internalize and make his or her own. And yes, there is the occasional clunky line, like "Blind sighted faith - feel the feeling" in the album's title track. But the music is good enough that we can overlook those lines.

Blind Sighted Faith opens with "I Could Be A King," which was released earlier as a single. The song begins as a sweet upbeat folk tune, and then the drums come in taking the song to another level. It's a brilliant combination of folk and pop with a Celtic influence. This song transcends genre, and it is the song that made me interested in this band. It has a great, positive vibe. And I really dig the backing vocals two and half minutes in, which remind me of the joyous vocals of the Afternoons (now called Shadow Shadow Shade).

The CD's title track has one of those perfect steady drum beats which always make me smile. This song features the line, "They say time's a healer, but I can't forget because I live my life full of regret." The harmonies definitely remind me of CSN, particularly their 1970s work.

"Only Me" is a pretty acoustic song with some good lyrics, such as these lines: "I’d rather be escaping from the truth/It’s only me I’m blaming/It’s me who changed the lanes and crashed down hard." When the harmonies come in, the song really reminds me of CSN in the 1970s. It's nearly three minutes in before the electric guitar and drums come in, and they don't break up the natural flow of the song at all. This track is one of my favorites.

Another of the album's highlights is "Elizabeth." I've always loved that name, and I love this song. It's wonderful acoustic pop, with lines like "And oh my lonely heart stopped beating/And oh my lonely eyes deceive me."

It's strange: "Follow The Road" has a few lines that border on cliches ("life is up to you," "time heals everything"), and yet still feels fresh, and is actually my favorite track on this CD. It has this impassioned intensity, some nice guitar work and a good beat that I can imagine really getting lost in during a live performance. Yes, you can dance to it. I particularly love the music during the repeated line, "Follow the road." This is a very cool tune.

"I Want To Be" is a sweet love song. It's simple, but completely effective. Here is a taste of the lyrics: "I’m sure we’ll have our ups and downs/But I’ll tell you now I’m not going anywhere/Oh girl you’ve got me lying here on the floor."

The album concludes with "Oh Lord," which feels like a slow, low fire. It's a song about the end of a relationship. You get caught up in its rhythm and momentum, and then it breaks through with an electric guitar part a few minutes in that seems to say things the voice is unable to, to express this hurt and longing. And then the vocals become louder, more emotional and plaintive, more energized and desperate.

Blind Sighted Faith is scheduled to be released on February 14, 2012 through Playing In Traffic Records (and distributed by RED Distribution/Sony Music Entertainment).
Posted by Michael Doherty at 4:08 PM