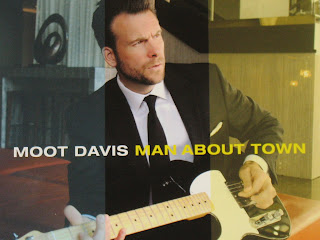 I don't listen to a lot of new country music because I've been under the impression that it's a lot of posing in cowboy hats. The music doesn't have much to say. So, not having heard Moot Davis before, it was with a certain amount of trepidation that I put the disc in. But right away my fears and notions were dispelled. The first track has a decidedly old-country feel, and so I happily settled in for what turned out to be a really good CD. If this album is representative of what country artists are doing these days, then I need to listen to more country.

There are some excellent songs here, particularly "How Long," "Black & White Picture" and the title track. And yes, it's true that not every track is stellar; there are some rather lame lyrics in a song like "Rust" for example ("There's rust growing on us and I must have left the sprinkler on overnight"), and the first line of "Rocket" is the over-used and never-amusing "I got a rocket in my pocket." But overall, this is a really good album, with pleasing rhythms and wonderful vocals. And Moot Davis mixes in some elements of early rock and roll on a few tracks.

Man About Town opens with "Rags To Rhinestones," an old-flavored country song that has a fun, playful attitude. Here is a bit of the lyrics: "From rags to rhinestones/Shooting star from the great unknown/Yeah, you should have seen me then/From rags to rhinestones/And back again." This song clearly a sense of humor about itself, with the idea that fake, glass gems are the height of fashion and culture, or at least the most a country singer can hope to achieve. The song seems to be poking a bit of fun at country music, implying that artificial, worthless stones are the country equivalent of real gems and riches. Because obviously rhinestones are a long way from riches, and are much closer to rags.

"Day The World Shook My Hand"

"Day The World Shook My Hand" also has an old-time feel which I appreciate. The simple rhythm on bass and drums, as well as the fiddle, work to create that feel. And the bright vocals (with that great bit of twang) add to it. This is really country at its best, and features lines like, "Hang around here long enough/And all your soft edges just get tough." Nice.

I love Moot's vocals when he really lets it rip, like on "Queensbury Rules," a song that definitely has a bit of a rock edge. The guitar is more rock than country. Here is a taste of the lyrics: "But your heart don't play by the Queensbury rules/And you're good at burying fools/Who wind up falling/In love with you/Well, my arrow/Lost sight of its mark." (By the way, Moot needs to fire whoever posted the lyrics on his web page. The lyrics to this song contain many errors, such as "your good at burying fools" and "my arrow lost sight of it's mark.")

"Crazy In Love With You"

"Crazy In Love With You" is a playful duet with Elizabeth Cook. This song reminds me a bit of Buddy Holly actually, in the vocal patterns. It's a sweet tune, one of those songs you find yourself swaying to. I like Elizabeth's voice, and she and Moot sound good together. (But again, the lyrics on his web site contain mistakes like "I think your crazy" and "Your one of those kind of women.")

"Only You" also has some early rock and roll influence, particularly Buddy Holly again.

"How Long" is one of my favorite tracks from Man About Town. It's more of that great, old-time country - just wonderful. I love that on-the-range rhythm, and the fiddle. This is the kind of country I could listen to all day. Here is a bit of the lyrics: "Well, I ride through these night times/Blue and all alone/And on I ride/'Cause I must find my way home/How long."

"Black & White Picture" is my vote for the album's best track. The instrumentation of this track is really impressive, particularly the guitar work. And I got caught up in the tale of a man who feels wronged by a woman, and the revenge he embarks on. He begins it with these lines: "I got a black and white picture/Of the man I used to be/Features they all look the same/But I swear it ain't me." An intriguing start, and from there the song just gets better and really pulls you in. This is a pretty amazing tune. After taking his revenge, "I turned my gun on everyone/'Cause I no longer cared." And when out of bullets he "went and sat down next to my love/And waited for my arrest." Everything just works perfectly here. I absolutely love this song.

Here is a taste of the song's lyrics: "Well, I tried so hard to love you/But you just don't understand/You just keep on running, darling/Away from your true lovin' man/Because you're everybody's baby/Yeah, you're everybody's gal."

Man About Town concludes with the title track, a song which really features Moot's vocals, bringing them to the fore. This one is more in the folk vein, which helps it become one of my favorite tracks. With just vocals and guitars, this song has a raw and simple power. In this one Moot sings, "And ghost's shoes, they're hard to fill/Took me years to swallow that pill/But I'll keep travelin' this world around/And I'll always be a man about town."

Musicians appearing with Moot Davis on this release include Kenny Vaughan on electric guitar, Chris Scruggs on pedal and lap steel, Harry Stinson on drums, Paul Martin on bass, Hank Singer on fiddle, and George Bradfute on slide guitar.

Man About Town is scheduled to be released February 21, 2012 on Highway Kind Records, Davis' own record label. This is his third release, the other two being Moot Davis (2004) and Already Moved On (2007).
Posted by Michael Doherty at 12:52 PM