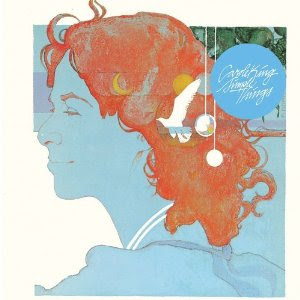 Carole King was initially known for her songwriting partnership with Gerry Goffin. She then released her first solo album in 1970. That and her second record, Tapestry, established her as an excellent singer as well as songwriter. She followed that with several more albums before switching labels in 1977. Her first record for Capitol was Simple Things.

How is it that this album had not previously been released on CD in the United States? There are some incredible songs on this record, particularly "Hold On" and "One." All tracks are originals, of course. Three were co-written by Rick Evers.

The album opens with its title track, "Simple Things." This song feels in some ways like a big production number to open a musical. But listen to that wonderful voice holding that note on "skies." Very impressive.

"Simple Things" was written by Carole King and Rick Evers. Here is a taste of the lyrics: "Simple things of the earth don't die/They just grow and change as time goes by/There are no questions without answers/I've found my answer to life is living."

Carole King's vocals - which are always good - are just incredible on "Hold On." This is an excellent and powerful tune, and is my favorite track on this album. This is no simple pop tune. Written with her husband Rick Evers, this song features lines like, "We need each other now more than ever/Our love is the sun - young lord of the light/It's a shame that one such as you/Should have to walk this cold and lonely night." Carole King plays 12-string guitar on this track.

"In The Name Of Love"

"In The Name Of Love" is a pretty song in which Carole King sings, "Know throughout every season/You are the name of love/And you'll keep on feeling at home/Throughout the coming years/Change is for certain/This we all know/Each day opening the curtain/On a brand new show."

It ends with the line, "Live in the name of love/Forever." Her husband, Rick Evers, would be dead a year after this album was released.

"Labyrinth" has some cheesy lyrics that are made powerful by Carole King's delivery and some interesting music. But really, she works "rainbows" and "butterflies" into one line. This one has a bit of a theatrical feel, like the first track. You can hear it in lines like, "After awhile we will see/The labyrinth isn't anyplace we need to be/Then we can come out from the heart of the darkness/Into a brighter day."

"Hard Rock Cafe" is a fun and somewhat goofy song. It's one of those songs that creates a party atmosphere by including background noise of people talking and laughing. It's a light, fluffy number that in some ways is in the same ballpark as the Village People's "Y.M.C.A." With lines like, "After a hard day's work I guarantee/There just isn't anywhere better to be/If you're unable to find good company/You can always sit down and watch the color TV/At the hard rock cafe." This song is unlike the rest of the album, except for the one slower part when she sings, "And if you're feelin' just a little bit lonely."

"Time Alone" is a slower, pretty love song with strings. I like these lines: "No sign of the changes we have come through/No mind of the strangers who think they know you."

"To Know That I Love You" is a sweet love song co-written by Rick Evers. Here is a bit of the lyrics: "Over and over again we light the flame/Rediscovering that we are the same and I love you/Ah - it feels so good to know that I love you."

Simple Things concludes with "One," which is one of its best tracks. It's a thoughtful composition about effecting social change through one's individual energy, and the connections we all make and have. Carole King sings, "Whenever I find injustice being done/And I wonder, what am I gonna do/What can one do except be one/Talking to two, touching three/Growing to four million/Each of us is one - all of us are one." It's actually a truly beautiful and positive song.

CD Track List
Simple Things is scheduled to be released on February 28, 2012 through Rockingale Records and Concord Music Group. Also to be released that date are three other Carole King CDs: Welcome Home, Touch The Sky (neither of which have been previously available on CD in the United States) and Pearls: Songs Of Goffin And King.
Posted by Michael Doherty at 12:09 PM