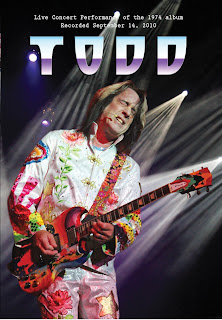 In September of 2010, Todd Rundgren did a series of six shows where he performed his 1974 double album Todd. This DVD is of the show from September 14th, 2010 at Keswick Theater in Philadelphia (Rundgren's hometown). Todd is an interesting choice to perform in its entirety because it doesn't contain the huge hits that a casual Todd Rundgren fan knows (songs like "I Saw The Light" and "Bang The Drum All Day"). But it's a good choice for a live performance because it has a definite theatricality to several of the songs (including a cover of a Gilbert & Sullivan tune), and it also touches upon a fairly wide range of musical types.

The DVD jumps right in, with only a few seconds of a wide shot of the closed curtain before the concert starts. And right away it's clear that Todd is going for a 1970s type vibe with his wardrobe. He has a silver sparkly long wizard coat on, and when he removes that he reveals a sort of 1970s Elvis suit. The rest of the band is in odd outfits as well. And this performance has a theatrical element in its staging. Band members come and go, depending on when they're needed. Even the drum kit is on a wheeled platform, and is pushed onto the stage when the drummer is needed, and removed when he isn't. It seems a bit silly, a lot of effort put into it.

Todd Rundgren (and the other musicians) have headset microphones, so that they're able to move easily around the stage. Multiple cameras captured this show, and there is a lot of fluid camera movement.

Some of the songs from this album are fantastic, and others aren't that good. Perhaps my favorite song on this DVD is the strange and wonderful "An Elpee's Worth Of Toons," on which Todd plays keyboard. I also really like "A Dream Goes On Forever," which is dominated by keyboards, and "Lord Chancellor's Nightmare Song," a song written by W.S. Gilbert and Arthur Sullivan. The latter is deliciously relentless, giving Todd almost no moments to breathe. At the end he playfully spins himself around.

I'm also really fond of "Drunken Blue Rooster," which feels like the music for some insane, wonderful, dizzying film. It's strange to see shots of the audience, because they're quite still, seated as if watching a play rather than a rock concert. Of course it is an odd combination of the two.

Some members of the audience do rise to their feet during "Everybody's Going To Heaven," a straight hard rock tune that gets them dancing. It has an instrumental intro, and then when the vocals come in, it's like balls-to-the-wall rock, with some nice work on drums. It goes straight into "King Kong Reggae," which is not reggae and is not one of my favorites. That's followed by "No. 1 Lowest Common Denominator," which has an odd spoken word section that seems to be one of the targets of This Is Spinal Tap (the intro to "Stonehenge"). Before that song, Todd jokes, "We'll get it right by the seventh show" (there being only six shows), a rare bit of stage banter in this performance.

"Useless Begging" reminds me a bit of Paul McCartney. It's a cool tune, though the line "Useless begging won't help me" is a bit redundant. And in the middle there is some silly (and mediocre) tap-dancing by drummer Prairie Prince.

Missing from this performance is "In and Out the Chakras We Go (Formerly: Shaft Goes to Outer Space)," the first song from the fourth side of the original album.

After the cool tune "Don't You Ever Learn?" Todd leaves the stage. He then returns to introduce the band, each member coming out one at a time (and in different outfits). So the encore is "Sons of 1984," which is weird, because after all it is the final song on the record, so it's no surprise that they're playing it. A choir joins the band for this song. And the audience is finally all up and dancing. The audience actually continues singing the song after the band has finished, which is really cool.

It's a good performance, but perhaps an even better reason to own this DVD is the special feature, an interview with Todd Rundgren conducted by Roy Firestone on September 13, 2010 at The Franklin Institute in Philadelphia. There is a seven-minute introduction and a six-minute film montage of Todd's career before he even comes out on stage. And the interview itself is over an hour, and I was completely fascinated. He of course talks about the early days with the Nazz, and about Albert Grossman, who came up with ideas to promote his music and then screwed him over. He talks about Janis Joplin, but Ray Firestone cuts him short, which is a shame. Todd's influences are discussed - folks like Burt Bacharach, The Beatles and Frank Zappa. And he tells the story about producing some of the Badfinger songs but not getting any credit.

Oddly the only song from Todd that they talk about is "A Dream Goes On Forever." I thought they might focus more on that album. The interview ends abruptly and it turns out that it's only part one of the interview. On the screen it says, "To be continued in part two," but doesn't say where exactly that will be found. My guess is that it will be on the DVD of his live performance of Healing, which will be released later. (Both albums were performed at the same shows in September of 2010.)