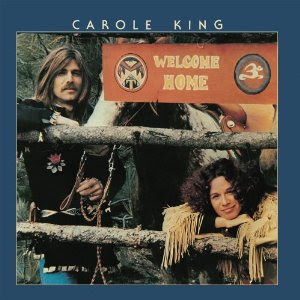 Welcome Home is the second and final album to feature collaborations with Carole King's husband, Rick Evers. (The first, Simple Things, was released the previous year.) Rick died between the time this album was recorded and when it was released. (There is a short eulogy in the liner notes that Carole King wrote.)

All the songs on this album are originals. As on Simple Things, Rick Evers co-wrote three of the tracks. And also like 1977's Simple Things, Welcome Home features the band Navarro. However, this is an unusual album for Carole King, for it features several musical genres, including rock and disco.

This album has been available on CD in the U.S. only as an expensive import. It's great that it's finally getting a proper release. This is quickly becoming one of my favorite Carole King albums.

Welcome Home opens with "Main Street Saturday Night," one of those 1970s rock songs about having a good time on a Saturday night, cruising the streets. The guitar even does that "woo-hoo" thing during the line about the "blonde-haired beauties, givin' it all they got." It's a fun song.

Here is a taste of the lyrics from the end of the song: "Here comes Little Willie - higher than a kite/He's been doin' some heavy duty hangin' out/If Willie's got a line on some of the best - it's got to be Dynamite/You know you can trust him/If the Law don't bust him." Nice. And are those lines a reference to Sweet's 1973 tune "Little Willy"?

"Sunbird" is a pretty tune that features Bob Harrington on hammer dulcimer. Co-written by Rick Evers, "Sunbird" features lines like, "Why can't we just be/And let the time of Spring to Fall not be a distance."

"Venusian Diamond" is a strange and wonderful tune. It begins with a slightly trippy effect to Carole's vocals for the first section, as she sings, "On the thirty-first day of the summer moon/In the marketplace/Somebody touched my hand and said/I was a woman of taste." And then the next section of the song is one of those great, upbeat '70s rock vocal bursts (that makes me think of Kansas or Yes).

And yes, the trippy section sounds like something off The Beatles' Revolver. In the liner notes, Carole King admitted, "we added every Beatle lick we could think of." You'll certainly hear that in the guitar of the instrumental section a few minutes into the song. I can't help but completely love this song.

"Changes" is a sweet, mellow pop song that's totally effective. It's a song about friendships ending, and not understanding why. (I can't help but wonder if this means anything to the Facebook generation, for whom "friend" means merely someone you bumped into once at a party.) I love these lines: "There's no wrong or right/It's just changes."

Yes, Carole King does a full-on disco dance number, and it's great. The song's title comes from the idea that a discotheque is actually a school of sorts; thus, Disco Tech, where you "meet the Dean of Boogaloo" and "The only school records are the ones we play." Sure, it's a bit silly. But it's also a whole lot of fun. It even features a sax solo by Ernie Watts.

The album concludes with its title track, "Welcome Home" which was written about the land in the mountains where Carole and Rick were living. This is a sweet and moving song, that has such a good feeling about it. Here is a taste of the lyrics: "In the waters I can see a clear reflection/Of the force that's all around/There's a harmony of season and direction/This is surely sacred ground."

CD Track List
Welcome Home is scheduled to be released on February 28, 2012 through Rockingale Records and Concord Music Group. Also scheduled for release on that date are three other Carole King albums: Simple Things, Touch The Sky (neither of which have been previously available on CD in the United States) and Pearls: Songs Of Goffin And King.
Posted by Michael Doherty at 12:25 PM