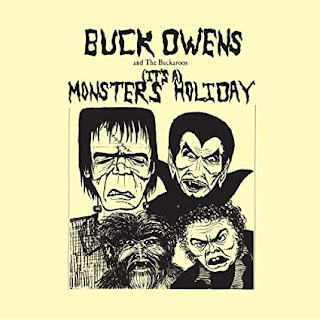 Omnivore Recordings is in the process of re-issuing several Buck Owens albums from the late 1960s and early 1970s. They started mid-summer with Sweet Rosie Jones, I’ve Got You On My Mind Again and Tall Dark Stranger, and continued in late August with three more titles. Now, in time for Halloween, comes the re-issue of (It’s A) Monsters’ Holiday, which was originally released in 1974. The album is presented in its original configuration, without bonus tracks, but with new liner notes written by Randy Poe. I’m not sure if it was part of the original artwork or not, but I love that photo of Buck Owens with a couple of the apes from Planet Of The Apes. Talk about a clash of two disparate worlds. Anyway, the tracks here were mostly written by Buck Owens, and display some of the humor he had shown on the television program Hee Haw. The musicians on this album include Don Rich on guitar, fiddle and vocals; Ronnie Jackson on banjo and guitar; Doyle Curtsinger on bass and vocals; Jerry Brightman on steel guitar; Jerry Wiggins on drums; and Jim Shaw on keyboards, synthesizer and mellotron.

The album opens with its title track, “(It’s A) Monsters’ Holiday,” which was also released as a single (and included on the 2019 two-disc set The Complete Capitol Singles: 1971-1975). This is a fun track to get us in the mood for Halloween, which will be here before we know it. And though the big West Hollywood Halloween celebration has been canceled for the second year in a row due to the pandemic, there still will be smaller celebrations to mark the best holiday of the year. Anyway, this song is a delight, including evil laughter and a scream at the beginning, and mentioning Frankenstein’s monster, the wolf man, Dracula and zombies. “Well, I had to pass by the old graveyard/So I went on the run/There was screaming and moaning, wailing and groaning/Scary as a mummy’s curse/I said, good buddy, you may get me/But, brother, let me tell you/That you’re gonna have to catch me first.” That’s followed by “Amazing Love,” a sweet country number written by John Schweers. I love that steel guitar, and this one also features a particularly strong vocal performance. The line “And then I can feel her smiling on the phone” will stand out for anyone who has spent time apart from his or her love.

“On The Cover Of The Music City News” is another song that displays Buck’s sense of humor. It’s his own version of Shel Silverstein’s “The Cover Of Rolling Stone,” which was originally recorded by Dr. Hook & The Medicine Show. This version is obviously for country artists, with mentions of cowboy boots and Nudie suits. The “teenage blue-eyed groupies” of “The Cover Of Rolling Stone” become “backstage ladies with furs and diamond rings.” That’s followed by a cover of Tom T. Hall’s “I Love.” The world lost Tom T. Hall just last month, and possibly for that reason, this song is striking a greater chord with me than it usually does, and I’m touched by its simple and goofy beauty. And though apparently Tom T. Hall said he meant the regular lawn variety, when most of hear the line about loving grass, well, we think otherwise. Buck Owens then picks up the pace with “Stony Mountain West Virginia,” a wonderful country song that features some nice work on fiddle. This is one of those great country songs that tell stories of men who went bad: “I fell in with bad companions/Robbed a bank in Memphis town/Headed south, scared and running/They caught me in Birmingham.”

“Meanwhile Back At The Ranch” is also a lot of fun. I dig that percussion, and Buck Owens’ vocal approach here has a strong rhythm of its own. It’s been a long time since I’ve heard someone say “Meanwhile back at the ranch.” Can we please revive that line? This song was also included on Country Singer’s Prayer, which was released in 2018. “Meanwhile Back At The Ranch” is followed by “You’re Gonna Love Yourself In The Morning,” an earnest love song in which a man promises he’ll treat the woman well. “You say you’d hate yourself in the morning ‘cause you’d wake up and I’d be gone/But if you give me just one more chance now, I could prove you wrong/You’re going to love yourself in the morning/Because I’m going to love you all night long/You’re going to love yourself in the morning/And every morning from now on.” Most women, it seems, have been mistreated by one man or another along the way. This is a song about the end of that for at least one person.

“Kiss An Angel Good Mornin’” is about smiling, and having people ask you why. The answer, of course, is simple: it’s waking up with someone you love. “You’ve got to kiss an angel good morning/And let her know you think about her when you’re gone/Kiss an angel good morning/And love her like the devil when you get back home.” This one was written by Ben Peters. Then “Great Expectations” is an unusual and delicious love song. Check out these lines: “The first time I saw you I thought I might/Have gotten you under my skin/For the more that I try to get rid of you/The more I just rub you in.” And I love that fiddle. The album concludes with “Pass Me By (If You’re Only Passing Through),” which was written by Hillman Hall. “I’m not going to be a stepping stone/Among the other hearts that you walked on/Lord, help me if I fall in love with you/Hey, pass me by if you’re only passing through.” No meaningless flings or temporary relations for this man. Ah, but in another sense, aren’t we all just passing through?

This re-issue of (It’s A) Monsters’ Holiday is scheduled to be released on October 1, 2021 through Omnivore Recordings.

Posted by Michael Doherty at 11:56 AM