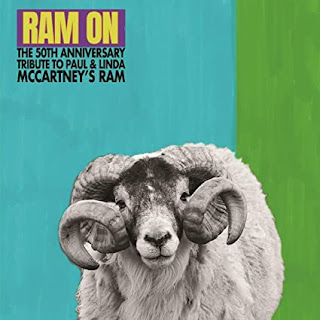 One summer in my childhood I worked at our grammar school, scrubbing and organizing desks and so on. The guy in charge had a little cassette player, and it would be on while we cleaned. As I recall, he had only one tape, which he played over and over. That was Ram. As many times as I listened to that album that summer, I still love it. And I’m clearly not alone. To celebrate the fiftieth anniversary of the album’s release, Fernando Perdomo and Denny Seiwell put together a group of musicians to perform and record the songs. And this isn’t just any group of musicians. Denny Seiwell himself played drums on Paul and Linda McCartney’s album, and likewise does so here (and, in fact, uses the same snare drum). Dave Spinozza and Marvin Stamm also both performed on the original record. In addition, this new release features the talents of many accomplished musicians and singers, including Joey Santiago, Davey Johnstone, Will Lee, Kaitlin Wolfberg, DJ Bonebrake, Carnie Wilson, Chris Price, and Cindy Wasserman.

The album opens with “Too Many People,” which I’ve always loved, even if it contains little jabs at John Lennon in lines like “Too many people going underground/Too many reaching for a piece of cake” and “That was your first mistake/You took your lucky break and broke it in two” and “Too many people preaching practices/Don’t let ‘em tell you what you wanna be.” Those lines are pretty gentle, anyway, when you compare them to Lennon’s “How Do You Sleep,” which is even more petty and sour, with John singing “The only thing you done was Yesterday/And since you’re gone, you’re just Another Day.” Anyway, on this version Dan Rothchild (who was a member of Heart for a while) provides lead vocals and plays bass, delivering an excellent vocal performance. Jordan Summers is on keys, Kaitlin Wolfberg is on violin and viola, and Neil Rosengarden is on French horn. It feels like a celebration, particularly toward the end, with that great guitar work. Fernando Perdomo and Michael Lockwood are on electric guitar, and Chris Alvy plays acoustic guitar. Things then get bluesy with a totally delicious rendition of the rather silly “3 Legs” that features Sam Babayan of The Dirty Diamond on lead vocals and resonator guitar. Durga McBroom and Shay Godwin provide backing vocals.

Pat Sansone (from Wilco) sings lead and plays keys on “Ram On,” this tribute’s title track. Nick Bertling plays ukulele, as well as providing most of the other sounds heard on this track. Jody Quine provides backing vocals, and Sam Babayan provides the whistling at the end. Then Adrian Bourgeois sings on “Dear Boy,” with Joey Santiago (of Pixies) on electric guitar, Jacob Jeffries on piano and Dan Rothchild on bass. Yeah, there is a tremendous amount of talent on this album. “Dear Boy” is followed by “Uncle Albert/Admiral Halsey,” which was released as a single and was a big hit for Paul and Linda McCartney. This version features Marvin Stamm on flugelhorn, and Chris Price on vocals and acoustic guitar, as well as more wonderful work from Kaitlin Wolfberg on strings. Debbie Shair, who, like Dan Rothchild, was in Heart for a while, plays harp on this track. As on the original recording, this version includes the rain and thunder sound effects, which I can always do without. Still, it is a totally enjoyable track. I particularly like the second half, which features a lot of great vocal work. The musicians are clearly having a good time with this one. In addition to Chris Price, this track features Emeen Zarookian, Alex Jules, and Ben Lecourt on vocals. The first side of the original record ends with “Smile Away,” a fun rock tune. This delicious version features Davey Johnstone (known for his work with Elton John) on electric guitar and slide guitar, with Timmy Sean on lead vocals. Backing vocals are provided by Emily Zuzik, Beatrix Coyle, Morty Coyle, and JK Harrison. Walter Ino plays saxophone. The musicians extend this one a bit, this version being approximately thirty seconds longer than Paul McCartney’s original.

The second side of the original record opens with “Heart Of The Country,” a song with a relaxed vibe. The version on this tribute album features Dan Rothchild on lead vocals and upright bass, with Teresa Cowles adding some work on electric bass. Both Fernando Perdomo and Stephen Flint play acoustic guitar, and Zack Lodmer joins on clarinet. That’s followed by “Monkberry Moon Delight,” a somewhat strange tune in which Paul McCartney really lets it rip vocally, but delivers some questionable lyrics. I mean, the opening line is “So I sat in the attic, a piano up my nose.” What is he on about here? It doesn’t really matter, I suppose. Joey Santiago plays guitar on this version, and Timmy Sean delivers lead vocals and also plays guitar. Ruti Celli is on cello. A whole lot of folks provide backing vocals here, including Cait Brennan and James Houlahan. Seriously, how much talent can fit on one release? The version here is approximately a minute shorter than Paul McCartney’s original track, which is fine. I always thought this one went on a little longer than necessary.

“Eat At Home” features Dead Rock West’s Frank Drennan and Cindy Wasserman on vocals, Phil Parlapiano on piano, Geoff Pearlman on electric guitar, and David Carpenter on bass, with DJ Bonebrake (of X) joining Denny Seiwell on percussion. They deliver a good, catchy rendition. Then Rob Bonfiglio and Carnie Wilson sing on “Long Haired Lady.” This, for me, is one of the more forgettable songs on the original album, but these guys pump some new life into it. Lola Bonfiglio is on backing vocals, and Probyn Gregory and Everett Kelly are on horns. That’s followed by that short reprise of “Ram On.” This rendition features the same musicians that play on “Ram On,” with the addition of Fernando Perdomo providing additional ukulele work. The original album concludes with “Backseat Of My Car,” a song that Paul McCartney first recorded during the sessions for Let It Be. This version features Brentley Gore on lead vocals, with Kaitlin Wolfberg again on strings, and the horn section of Everett Kelly and Probyn Gregory.

This tribute album has three additional tracks. Two of the songs covered were included on the 1993 reissue of Ram, as well as the three-disc 2012 reissue of Ram – “Another Day” and “Oh Woman Oh Why.” “Another Day” was originally released as a single, and is a song referred to by John Lennon in “How Do You Sleep?” It’s a catchy song, and is one that Paul introduced during the Let It Be sessions. Here Gordon Michaels is on lead vocals, and David Spinozza is on electric guitar and slide guitar. As mentioned earlier, David Spinozza played on the original Ram album, but interestingly he also played on John Lennon’s Mind Games and Ringo Starr’s Ringo The 4th, as well as on albums by John Denver, Bette Midler, Don McLean and Roberta Flack. “Oh Woman Oh Why” was the flip side to “Another Day,” and has a bluesy rock vibe. This version features Eric Dover and Lauren Leigh on vocals, with Joey Santiago on electric guitar and Will Lee on bass. This tribute concludes with a reprise of “Too Many People” titled “Too Many People (Slight Return),” and it features most of the same musicians that play on “Too Many People.”

Ram On: The 50th Anniversary Tribute To Paul & Linda McCartney’s Ram was released on May 14, 2021 through Cherry Red Records.