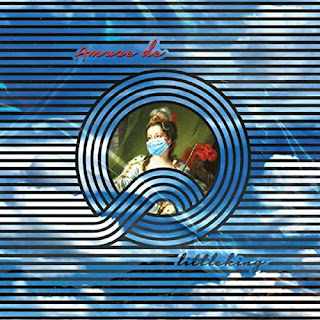 Little King formed in El Paso back in the mid-1990s and has gone through several lineup changes in the twenty-five years of the band’s existence, the one constant being singer and guitarist Ryan Rosoff. The newest member is bassist and backing vocalist Manny Tejeda, who joined in 2019. The current trio is rounded out by Eddy Garcia on drums (he joined Little King fifteen years ago). The group’s new album, Amuse De Q, features all original material, with lyrics by Ryan Rosoff and music by the trio, the songs inspired by the pandemic and the resulting quarantine (the Q of the album’s title). On this release, the group is joined by guests on certain tracks, including cellist David Hamilton and violinist Christina Hernandez, both of whom also played on Little King’s previous release, 2019’s Occam’s Foil.

The album opens with “Bombs Away,” a hard rock song with some progressive elements. It is a song that clearly comes out of the pandemic and the days of isolation, with Ryan Rosoff singing “I don’t remember what day it is/And I haven’t shaved in a week/The ficus is starting to speak.” With the possible exception of that last line, that description was apt for a lot of us. These lines also stand out: “The news is on/And I don’t wanna miss/The Siren Song/I don’t wanna miss/The death toll at dawn.” The last five years have turned me into a news junkie, and last year, with so much time on my hands, I found myself constantly reading updates on the pandemic. Remember when they first told us 200,000 Americans might die, and we were horrified? That number has been greatly surpassed, and here we still are, with imbeciles refusing to get the vaccine. This song was released as a single. That’s followed by “Keyboard Soldier,” the track that first got me interested in this disc. This one was also released as a single, and also deals with the period of isolation. During the pandemic, many people became, in one sense or another, keyboard soldiers, for the computer was our access point to information and to other people, and was perhaps the only way we could directly respond to the orange menace in the White House (though often saying what we really meant got us suspended from those social media sites). This song addresses that racist prick. It also addresses that odd and largely false sense of empowerment that being able to reach people through those sites gives us. And the song eventually moves from behind the computer out into the streets. It is one of my favorite tracks.

Jessica Flores joins the group on lead vocals for “How Could You?” During the lockdown, domestic violence cases increased worldwide, as stress and anxiety overtook people and left them with no reasonable outlet, and vulnerable individuals were basically stuck at home with their abusers. This song addresses that issue. Check out these lyrics: “He hits me...I said it/Took my share of the blame/I kept coming back for more/Spinning around and around/And forever/Caught in the wheel of shame.” And these: “Quarantine hell/Terrorized and frozen/In a prison cell.” This track features the string section of David Hamilton on cello and Christina Hernandez on violin, helping to make this track another of the disc’s highlights. Then Becca Gonzales joins the group on vocals for “Set It Down,” a song about alcoholism which has a more haunting vibe at moments, particularly in the vocal delivery, and some excellent work on drums. Asher Syrinx is on keyboards for this one, and Bryan Bowles is on percussion. Here is a taste of the lyrics: “So many times I heard ‘Last call’/Lights come up and I take a fall/I couldn’t walk out/Yeah, I barely could crawl.”  This song ends with a plea for someone to take his car keys.

David Hamilton again joins the group on cello for “Melpomene,” a short and rather pretty instrumental track. Melpomene is one of the nine muses in Greek mythology, specifically the muse of tragedy. And of course there is also a play on that in the album’s title. In fact, the artwork on the cover is from a painting of Melpomene done by Johann Heinrich Tischbein in the eighteenth century (the mask is added, of course). “Melpomene” is followed by the album’s title track, “Amuse De Q,” which offers thoughts on the experience of the lockdown and the resulting loneliness and depression, taking those thoughts to a possible extreme. “I’m virtually gratified/But she wants the real thing/And I can’t provide it/I’m thousands and thousands of miles from the action/Locked up inside without satisfaction/This is how it works/This is how it goes/This is how it ends/For all humankind/Best make amends/Or be left behind.” Oh yes, I think we all found ourselves in dark places like that from time to time. This track has a good bass line, and also features the string section of David Hamilton on cello and Christina Hernandez on violin. The album concludes with “Omega Son,” a hard rock song that goes into that darker realm. It did often feel like the end of the world, when we were trapped at home with our own fears and worries, listening to the death tallies on the news. “Last man stands/Outlived the scourge/Slept through the plague/Singing the dirge.”

Amuse De Q is scheduled to be released on September 3, 2021.

Posted by Michael Doherty at 11:39 PM