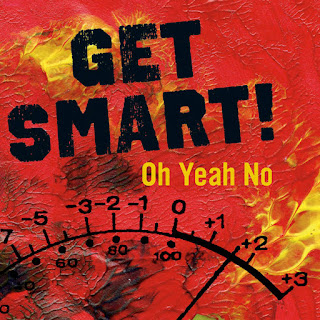 Get Smart! formed in 1980 in Lawrence, Kansas, with Marcus Koch on guitar and vocals, Lisa Wertman Crowe on bass and vocals, and Frank B. Loose on drums. The trio released a few albums and EPs over the next seven years, and started to record a new album in 1987. But after some personnel changes, the band broke up in 1990, and those tracks were left unreleased. Until now, that is. The band has reformed, with its original members, and has released a six-song EP titled Oh Yeah No featuring songs recorded in 1987. The band was planning on performing in late 2020, but the pandemic puts those plans on hold. For now, we can enjoy the new release.

The EP opens with its title track, “Oh Yeah No,” which has a driving beat and a great punk vibe. I especially love that work on bass. “Yeah, yeah yeah yeah, it was nothing/ Yeah, yeah yeah yeah, it destroyed us/I want that cancer.” These days it’s difficult to hear those lines without thinking of the current pandemic. “No, no no no, they would tell us/No, no no no, it didn't happen/No, no no no, they didn't question.” That’s followed by “Rhythm Empty,” which has something of a late 1960s vibe, particularly in the vocals. “Where something's born, we fall apart/Where breath is faint, inhale with me/Inhaling rhythm empty.” You could believe those vocals had been recorded in San Francisco in 1967. And that guitar part in the second half likewise has a somewhat psychedelic feel.

“Under The Rug,” one of my personal favorites, opens with these lines: “I saw you in your tower/I paid the fee/I gave my blood/I spit on my shoes/To live in your shadow/I lost more than I could find.” This one has more of a punk pop sound, and features a solid beat. Also, the band jams a bit on this one. “How do you plead with your pants on fire?/When a bucket of water/Is under the rug.” That’s followed by “Blonde Goes West,” with Marcus singing lead and delivering some really good work on guitar. That repeated lick that first comes around twenty-seven seconds in is driving me crazy, because it reminds of something, but I can’t quite put my finger on it. Perhaps a Buzzcocks song? Anyway, check out these lines: “So, we have pleasure and freshly caught pain/Break it in pieces, we'll sleep on the stain.” And is that a little nod to Buddy Holly in the line “Let’s get drunk and not fade away”?

“Painted Floor” is a slower, but yet totally catchy number, featuring some cool lyrics. Here is a taste: “It’s spitting out anger and I’m full of dread/We’re moving through changes/We won’t pass again/You’re looking through curtains/You’re wondering when/I’ll disappear.” I love this song more each time I hear it. I do hope this band goes out on the road once it’s safe to do so, because I would really like to see them perform this song in particular. The EP then concludes with “Paradise,” an excellent rock song that drives and pushes us forward, a song we can throw ourselves into. And I love that guitar work. “You looked at me; I see through you/Wishing all your thoughts could fill your dreams/But I never want to waste a day in paradise, in paradise.”

Oh Yeah No is scheduled to be released on CD on October 8, 2021, though apparently it was made available digitally on November 17, 2020.

Posted by Michael Doherty at 1:56 PM