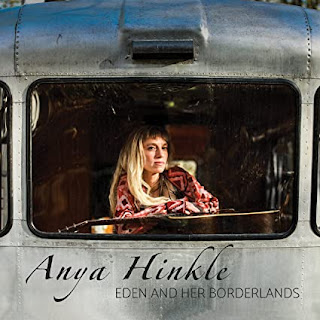 Anya Hinkle is a talented singer and songwriter known for her work in the bands Dehlia Low and Tellico, and known for her skill in telling engaging stories through song. Eden And The Borderlands is her debut solo album, and it features mostly original material, written or co-written by Anya Hinkle. Much of this material was released as singles over the past year, and now these gems are together, along with some material we haven’t heard before. Joining Anya Hinkle on this album are Billy Cardine on dobro, Julian Pinelli on fiddle and vocals, DaShawn Hickman on pedal steel, Graham Sharp on banjo and vocals, Mary Lucey on clawhammer banjo and vocals, Thomas Cassell on mandolin, Duncan Wickel on cello, Daniel Kimbro on bass, Johnny Calamari on bass, Jon Weisberger on bass, Wendy Hickman on vocals, and Nick Falk on drums.

Anya Hinkle opens the album with its title track, “Eden And Her Borderlands,” a beautiful song that features some nice work on pedal steel and dobro. There is something soothing about this song; partly it is the honesty and humanity of her voice and her delivery, partly it’s that pedal steel, and partly it is the song’s gentle groove. And then of course there is the song’s subject, the idea that the journey toward a paradise is a journey within, that we can get to – or perhaps in a sense already are at – the outskirts, the edges of some sort of paradise. It is a warming idea in these days where the focus seems to be on the divisions among people. Here is a taste of the lyrics: “And when I get there, gonna let you know/I’ve reached the border where the sycamores grow/The path was twisted, some of my turns were wrong/Like a dream I had once but now it’s gone.” There is also something refreshing in the line “some of my turns were wrong,” because the overriding sense in recent days and years seems to be an unwillingness to admit mistakes, and so there is no learning from them. In this song, there is hope and a sense of possibilities within reach. It is a great way to kick off the album.

The world feels more uncertain these days. The last five years have been difficult for most of us, and perhaps partly because of these strange times the first line of “Lady Luck” stands out: “Tough choices are the ones you make when questions have no answers.” It seems there are more questions and fewer answers, and we could all use a visit from Lady Luck as we take closer looks at our own lives, and try to figure out if we’re on the best path. “Yeah, I guess I always thought one day I’d settle in my stride/That something would add up from all the different things I tried.” Those lines in particular stand out for me. This is a time of reflection for many of us, though also with the understanding that time doesn’t halt for reflection. Check out these lines: “I think I know why old folks like to sit on their front porches/Soak the hours in gasoline and burn them up like torches/Because if you’re lucky to make it, the weight’s gonna break every bough.” This is one of those songs that allow you a good reflective cry if you need it. The gentle sound of it seems to say it’s okay, go ahead, let it go.

“I Belong To The Band” is a more lighthearted, cheerful tune. This is one that was released as a single back in January. It is also one of only two tracks that Anya Hinkle didn’t write. It was written by Gary Davis. Her version still has some of that gospel and blues feel of the original, but goes more into the bluegrass realm and features some wonderful work on fiddle and mandolin. Here she sings she belongs to “that Asheville band.” That’s followed by “Road Of The Winds,” which was also released as a single. In fact, it was the first single released from this album, back in April of 2020. This song is about the desire for motion, for making changes, and it is ultimately hopeful and positive, giving us a feeling of capability of making changes in our own lives. “Storms have passed, skies have cleared/In the vastness, in my little boat, just sitting here/Not afraid, not without fear/With the faith of a mariner I cross the hemisphere/It’s time to go/Time to go.”

“Hills Of Swannanoa” was the second single released from this album, and was co-written by Akira Satake. This song, which has a beautiful and exciting sound, tells the true story of a flood that took place approximately a hundred years ago. Of course, flooding is a topic on people’s minds these days, and with climate change, we can expect more storms and floods. This song, I suspect, will speak strongly to a lot of folks, not just because of its timeliness, but because of the human story within its context. Check out these lines: “Pulled the trestle from its footing/The house from its foundation/The root from the rock it’s covering/Drowned the prisoners in the penitentiary/Then the waves, the black waves, waves of water, they took hold/Folded over and pulled her in.” Plus, there is a wonderful instrumental section at the end. That’s followed by “My Faithful Sparrow,” a song that is incredibly pretty, both in the guitar work and her vocal performance. “You stay/With me/Even though/I might be feeling so low/You stand here with me.” Like “Hills Of Swannanoa” and “Road Of The Winds,” this one mentions storms: “And when these storms have passed/Sing your sweet song for me/Carry me.”

“What’s It Gonna Take” is another timely song, this one addressing the violence stemming from the systemic racism in this country. It was co-written by Graham Sharp, who plays banjo and sings on it, and it also features some excellent vocal work by Wendy Hickman along with Anya Hinkle. “What’s it gonna take/To finally break these walls in between/What’s gotta give/To finally live the American dream/Tell me, what’s it gonna take.” This track also features moving work on pedal steel, and is one of my personal favorite tracks. It was released as a single in February. That single was followed in March by “Meditation: Beyond The Shores Of Darkness,” a beautiful instrumental track. It’s been a dark time, no question about it, and this tune acknowledges that, and also tries to help us emerge from it. “Why Women Need Wine” was also released as a single, and is the song that got me excited about this album. The song has a clear and important message, and delivers it with humor. “You can speak up, girl, if time allows/But nobody wants to hear you whine/Grow up, but not over thirty-nine/Is why women need wine.” This track also features some wonderful work on fiddle. I expect this song will be greatly appreciated and enjoyed, by men as well as women.

“That’s How Every Empire Falls” is the album’s second cover, written by R. B. Morris, and included on his Spies Lies And Burning Eyes album. John Prine recorded a version of it, including it on Fair & Square. Marianne Faithfull included her own rendition on Horses And High Heels. What’s crazy to me is that all three of those versions are from before the previous administration took up residence in the White House, for this song strikes an even stronger chord these days when that racist gameshow host might be out of office but his sycophants and disciples still follow his lead. It’s an excellent song, and one folks ought to pay attention to, with lines like “For when religion loses vision/That’s how every empire falls” and “For when the heart is never open/That’s how every empire falls.” And check out these lines: “A bitter wind blows through the country/Hard rain falls upon the sea/If terror comes without a warning/There must be something we don’t see/What fire begets this fire?/Like torches thrown into the straw/If no one asks, no one will answer/That’s how every empire falls.” The album concludes with “Merciful Dawn,” featuring more beautiful vocal work. It’s a song that reaches out to us, and we can use as many of those as we can get. “Don’t you sing, don’t you sing a sad song/Though the road is long/And it’s a long time coming home/Don’t you sing a sad song alone.”

Eden And Her Borderlands was released on July 16, 2021 on Organic Records.

Posted by Michael Doherty at 3:14 PM