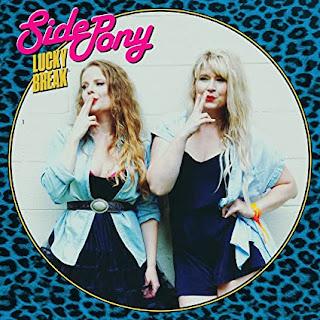 Lucky Break opens with “Bad Ideas,” which has a catchy rhythm (the drums reminding me a bit of Sweet’s “Ballroom Blitz,” and the bass reminding me for a moment of “You’re The One That I Want” from Grease), and is a sort of celebration of bad decisions. Not the kind of bad decisions that shatter lives and endanger children, of course, but more like the bad decisions people make on a more routine basis. And make more than once. And then again. After all, they sing about “just how good bad can get,” and how can you find that out without repeating mistakes? It isn’t long before they show how great their harmonies are together. “All of my bad ideas keep getting better.” This track becomes quite lively. There is even a delicious section featuring vocals and drums, where they tell us, “I’ve got a devil on each shoulder/And both of them agree/If I’m going down to the flames of hell/Well, I’m taking you with me.” This is a seriously good opening track. It is followed by the album’s title track, “Lucky Break,” which was released as a single back in April (the duo’s first), and features a different group of musicians backing them. Chris Autry is on bass, Bryan Owings is on drums, and Dan Mitchell is on keys. This song addresses the pandemic, or more specifically, the effect the pandemic has had on people’s routines and work. Here are the opening lines: “All the races have been called off/All the clocks have been stopped/Every contest is a wash/All the meetings are postponed/All the outcomes are unknown/And everyone’s alone/Nobody’s getting ahead/Nobody’s missing out/We’re no better than anyone else/Right here in the right now.”  This is such an interesting song, because it feels like it could easily become a real downer, and yet there is some serious optimism in the song’s main lines, “Have you ever prayed for your whole life to change?/Well, this could be your lucky break.” It could be sarcastic, but I don’t hear it that way. Sure, there is some humor here, but I still think of this song as a “glass is half full” kind of piece. This is one of my favorite songs on the disc.

“Heels” is a total delight. It’s a fun country honky tonk song about the current state of gender relations, and the antiquated attitudes that some people seem unable to let go. “These kinds of lessons aren’t easy to unlearn/Like if you want to please a man, put on your shortest skirt/Have dinner on the table after you get home from work/To hang on to a man, they say you shouldn’t be too smart.” The song has something to say, but is also extremely catchy and a totally enjoyable ride. “If you want to keep a man, don’t you correct him when he’s wrong/If he doesn’t take directions, what he takes is twice as long/To hang on to a man, sometimes you have to let him win.” If there is any sense to this world, this song will be a big country hit and will end up in several films. That’s followed by “All I Have Is Want,” and what is immediately striking about this song is their gorgeous harmonizing. This is a beautiful and moving song, featuring some nice work on pedal steel. Check out these lyrics: “Gave up the upper hand, oh, I’m tired of the games/I’ve been on the road, just so you’d have something to chase/That was my mistake.” “Old Woman” is also beautiful, but in a different way, in its sentiment, as well as the delivery. This is a love song about a future love, about possibly having to wait until old age for that perfect love. “We may not have our whole lives ahead of us/But whatever we have will be more than enough/He’ll hold my hand when we walk down the street/Stop in the shop to buy me an ice cream.” This is a beautiful and hopeful song.

“Under The Surface” comes as something of a surprise, being about mermaids, with lyrics that mention sirens, manatees, Shamu and Darryl Hannah. But of course it is about more than mermaids. It is about the need for equality, and it contains a reference to The Merchant Of Venice in the lines, “Cut me and I’ll bleed/I’m still a person.” Shylock, in the third act, asks, “If you prick us, do we not bleed?” This song also has a great rhythm. That’s followed by “Pressing My Luck,” a slower gem that eases in and features some nice work on keys. “A little bit late is still almost on time/So I’m going eighty in a fifty-five/Grinding the gears ‘til I burn out the clutch/I’m always pressing my luck.” This is another of the album’s highlights, in part because their vocals are just so bloody good. Though honestly, there isn’t a weak track here. The album concludes with “All The Time In The World,” which is interesting coming after a song that begins and ends with a line about being a bit late. This is another fun one, and, like “Lucky Break,” has its own perspective on the pandemic. It is about having time due to everything being closed, and contains several pop culture references, such Netflix, Hulu, Tinder, Breaking Bad, Amazon. They even break in the middle for a section about various things they’ve ordered on Amazon Prime, certainly a surprise (by the way, that section includes a mermaid tail). There is a good deal of humor to this one, and it features some wonderful stuff on keys. “All the time I always wished I had/The world is my oyster, and I think mine’s gone bad.”

Lucky Break is scheduled to be released on October 8, 2021 on Mule Kick Records.

Posted by Michael Doherty at 1:59 PM