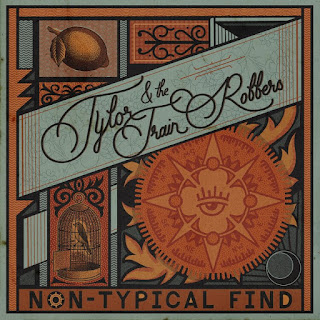 Tylor & The Train Robbers, led by singer and songwriter Tylor Ketchum, deliver some excellent music in the folk and country rock realms, with a focus on strong lyrics. During the forced break in touring due to the pandemic, the group put together songs for a new album. Non-Typical Find is the group’s third album, following 2019’s Best Of The Worst Kind. Since that last album, there has been a change in drummers, with Tommy Bushman replacing Flip Perkins. The new release features all original material, written or co-written by Tylor Ketchum, and it was produced by Reckless Kelly’s Cody Braun, who also plays fiddle and mandolin on it. Also joining the group on this album are Jennifer Pisano Ketchum (Tylor’s wife) on backing vocals; Bernie Reilly on cello, banjo, piano, organ and accordion; and Brian Davies on pedal steel guitar.

The first track, “Equation Of Life,” eases in with some pretty, soothing work on acoustic guitar, before these opening lines: “You’ve been trading in your time for so-called success/I sure hope it’s worth all the mess.” I love Tylor Ketchum’s voice. There is a friendly aspect to it, and also experience in that delivery, making it a voice you can trust. The song soon kicks in, becoming a delicious country number. “There ain’t nothing wrong with being proud of where you’re from/Long as you ain’t dragged down by the town that raised you.” There is a strong sense of place here, particularly in lines like “You can join the choir or the coyotes on the hill.” “Equation Of Life” is followed by “This Town,” a lively, country rock song, with a full-band sound from its start. “Well, this here ain’t my home/Though I’ve called it that for a time/But I’ve been here just long enough/To feel something when I leave it behind.” We’ve all felt that way about one place or another, haven’t we? There is a good energy about this track, and I like the work on pedal steel.

Like the album’s opening track, “Worth The While” begins with some good work on acoustic guitar and has a strong opening line, “Well, today will always turn into yesterday come tomorrow.” This one soon kicks in too, but maintains a rather beautiful sound. And lyrically, it is one of the album’s best tracks. So many lines speak to me, such as “Are you feeling somewhere in-between/This whole nightmare and a dream” and “And when peaceful ain’t quite getting it done/And you’re dealing with a heavy dose.” And of course the line “It feels like a virus with no vaccine” must have been inspired by the crazy year we’ve all experienced, and will likely stand out to anyone who listens. This track features some nice work on keys. The song returns to its opening line at the end. That’s followed by “Jenny Lynn,” a love song written for Tylor’s wife, who joins him on vocals. It about two people who are often apart, and how traveling makes us appreciate home all the more. There is an undeniable beauty to this one as well, even before the fiddle comes in.

The album’s title track, “Non-Typical Find,” is an interesting song, what with its arresting opening line and the shifting points of view. It begins by being told in the first person in the first verse, then describes a dramatic moment in the life of another person. And soon we understand that that woman’s story is going to intersect with that of the song’s narrator, and that moment gives us some anxiety. It’s a fairly grim tale, and apparently a true story, yet the music has a rather cheerful vibe for the most part. Then “Lemonade” has an easygoing, friendly vibe, a song in which a man reaches out to a woman from his questionable past. Check out these lines: “I only used to call you for bail with excuses for the crime/Our love was circumstantial, now for that I apologize/With regret for past decisions I seek forgiveness through your eyes.” And “Kid, I know I left you hanging after I promised to cut the rope” is one hell of a good line. It reminds me a bit of a line from “The Ballad Of Black Jack Ketchum” from the last album, “Well, my daddy always said you’re only as good as who you’re hanging with” (that song being about a criminal who was hanged). This track also features some nice work on banjo.

A more somber tone is established at the beginning of “Something Better,” a song that was co-written by Jennifer Pisano Ketchum. This one introduces us to several characters who are struggling. “They can take all they think you have, unaware of what they leave.” Interestingly, the song kicks in just as the lyrics take a hopeful turn, “Someday she’ll find her something better.” This band can tell compelling tales much like a talented short story writer. In this song and in the title track, for example, they create intriguing threads that build our interest. “Something Better” is followed by “Staring Down The North,” which has a strong rhythm, and features lyrics that will likely speak to many of us. “And you can find all your troubles on the internet/I guess what you search for is what you get/Press reset, disconnect, and go find your ground.” I like that he then admits he doesn’t have the answers, in the lines “I don’t know what I’m taking about/I’ll keep on singing, maybe figure it out/Some of what I say just may be true/But I don’t know/I believe I’ll leave it up to you.” I’ve always maintained that no one knows anything for sure, that we’re all bouncing around out there, just trying to make our way through without getting hurt too much. This song has a lively rock vibe.

“These Eyes” has a sweet, somewhat relaxed and completely honest vibe, and features both mandolin and fiddle. “I can’t spit out all these words/But can’t you see I need to vent/And you give me that look, but you know exactly what I meant.” That’s followed by “Back The Other Way.” Again, this band has a talent for coming up with effective opening lines. In this case, they are “I woke up late this morning to the world’s worst cup of coffee/I made it myself so I’m the one to blame/I drank the whole damn pot, you know I wouldn’t want to waste it.” This one moves at a fast clip, like a train cutting across the landscape. These lines stand out for me, perhaps because I relate to them: “I tend to overthink the things I shouldn’t think about/It very rarely does me any good.” The album then concludes with “Silver Line,” a gentle and pretty number, a song that clearly comes out of the pandemic and this period of isolation and change. “But we still won’t know why/Everybody’s closed off to an open mind/And we still won’t know when/Or if things will ever get back to the way they’ve been.”

Non-Typical Find is scheduled to be released on July 9, 2021.

Posted by Michael Doherty at 9:35 AM