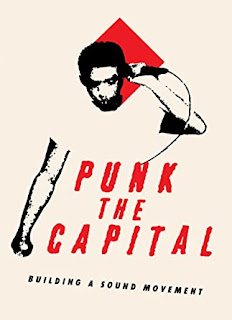 When most of us think of the Washington D.C. punk scene, we think of the hardcore bands that seemed to take over in the very late 1970s and early 1980s. But bands in our nation’s capital were delivering punk music several years earlier than that, and the documentary film Punk The Capital: Building A Sound Movement recounts and explores the scene from its beginning in 1976 to when the scene really changed in 1983 and 1984. The film, by Paul Bishow and James June Schneider, features interviews with many of the key players, and a whole lot of great music, including early concert footage. Even if you think you’re familiar with the bands and the history, you are likely to learn something new here, and have fun while doing so. For this documentary, even when it goes into more serious territory, is great fun.

The film goes in chronological order, and is divided into several sections. The first section details the music from 1976 to 1978, and features interviews with members of The Slickee Boys, one of the first punk bands in the area. These guys also incorporated elements of garage and psychedelic music into their material, and the film includes some footage of the band performing “Put A Bullet Thru The Jukebox.” Slickee Boys bassist Howard Wuelfing mentions that the community was quite small at first, with just one venue, The Keg, holding a punk night. There are interviews with other musicians as well, including Minor Threat’s Ian MacKaye and Jeff Nelson. Jake Whip, of White Boy, says: “If D.C. seems like a town that punk shouldn’t happen in, then maybe that’s exactly where it should happen. And it did make us want to scream and play really loud.”

When the film enters the next section, detailing music from 1979, it gets into how the group Bad Brains changed things. Members of the band are interviewed, and some concert footage is included. Interestingly, the members of Bad Brains say that it was groups like Sex Pistols and Dead Boys that heavily influenced them and the direction they decided to take their music. This section also contains footage of Teen Idles. That leads to one of the most interesting sections of the documentary, which is about Madam’s Organ Art Cooperative, a place that had a great sense of freedom and where punk shows began being held. Bad Brains actually lived there for a while, writing songs in the basement. What is particularly interesting is the relationship between punks and hippies at that spot. Generally, you think of those two groups as separate. Henry Rollins is hilarious when commenting on that: “I got no wisdom from any of those people. In fact, the people that actually lived in Madam’s Organ, to a certain degree, scared me just a little.”

One of the groups I’m most intrigued by is The Enzymes, a band that apparently never released an album. Jon Gibson, one of the group’s members, talks about how their music was in the punk tradition of social protest, but also had a nonsensical element. Chris Haskett, who would later be a member of Rollins Band, was in this group. And, yes, the documentary includes some footage of these guys performing.  The film’s next section includes information about Dischord Records, how that label was started by The Teen Idles, and its mission to help all the bands. And then the film gets into the hardcore music, with interviews with members of S.O.A. (State Of Alert), Henry Rollins’ first band. I love that footage of them performing. Henry Rollins talks about how the band was in the process of writing new material when he suddenly left to join Black Flag, which put an end to S.O.A. Around that same time, Bad Brains moved to New York, and Minor Threat filled the vacancy they left behind. And of course the film gets into the straight edge movement within the scene. The documentary does a great job of showing just how close-knit the scene in D.C. was. What is also interesting is how the D.C. punks were good about documenting the music and saving stuff, just as concert fliers and tapes and so on.

The film ends in 1983, 1984, when the scene began to change, thanks to inaccurate portrayals of punks in the media. People new to the scene began acting the way they’d seen punks portrayed, and so there was now something false about it. Even worse, was the negativity and violence that was introduced into the scene. But as I said, this documentary has a very positive feel about it, and is an enjoyable ride.

Apparently, the first cut of this film was seven hours long. Wow! I wish they would release that. But the DVD does include approximately fifty minutes of bonus footage. It is divided into four sections. The first section is about the band Void, and features interviews with band members Chris Stover and John Weiffenbach, as well as some concert footage of them. The second section is about the band Scream, and includes interviews with members Pete Stahl, Franz Stahl, Kent Stacks, Skeeter Thompson and Dave Grohl (yes, that Dave Grohl, who would go on to be in Nirvana and Foo Fighters). Franz and Pete’s father managed a rock band in the 1960s, The Hangmen, and in this bonus footage, Bob Berberich of that band shows up to talk to them, along with Martha Hull of The Slickee Boys. There is also recent footage of Scream performing after reuniting.

The third section of bonus footage focuses on The Slickee Boys, with Kim Kane saying the band’s name means basically a street punk who sells black market goods. In this footage, Martha Hull reveals that she doesn’t really hate disco. There is concert footage of the group performing “The Girls Want To Be With The Girls,” one of my favorite songs of theirs. The band members talk about how their music changed with changes in personnel. The final section is about the WGTB benefit concert featuring Urban Verbs, The Cramps and The Chumps.

Punk The Capital: Building A Sound Movement was released on DVD on June 8, 2021.

Posted by Michael Doherty at 12:14 PM