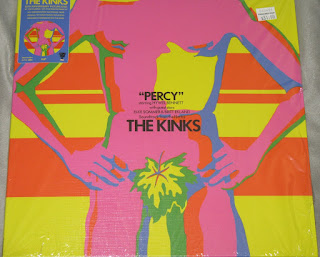 I’m a big fan of The Kinks, and have been all my life, but somehow I never owned a copy of Percy before now. It is the soundtrack to a 1971 film (which I’ve never seen) and apparently it originally did not get a proper U.S. release, and was available only as an import. Weird, particularly as the band’s previous album, Lola Vs. Powerman And The Moneygoround, Part One, did pretty well and yielded a couple of hits. Well, to mark the album’s fiftieth anniversary, it has been released as a picture disc as part of the first Record Store Day of 2021. Very cool. All tracks on this album were written by Ray Davies, and the album includes several instrumental numbers. No liner notes are included, which is a shame. But it is still worth owning, of course.

The album opens with an excellent song titled “God’s Children.”  Check out these lyrics: “Man made the buildings that reach for the sky/And man made the motorcar and learned how to drive/But he didn’t make the flowers and he didn’t make the trees/And he didn’t make you and he didn’t make me/And he’s got no right to turn us into machines/No, he’s got no right at all.” That’s followed by a really strange instrumental rendition of “Lola.” On the one hand, this version rocks, and then on the other, there is a touch of cheesiness about it, particularly in the way what would be the vocal line is presented. And what an odd ending. Then “The Way Love Used To Be” is a mellower, prettier song, with strings. Here is a taste of the lyrics: “We’ll find a way through the mad rushing crowd/And we’ll talk about the way love used to be.”

The Kinks get into the blues with “Completely,” a groovy instrumental track featuring some good work on harmonica. I’m totally digging this,  and it is striking me as crazy that I hadn’t heard this music until now. That’s followed by another instrumental track, ‘Running Round Town,” which begins as one thing, a fun and playful number, but ends as quite another, with a gentle sound. The first side then concludes with “Moments,” in which they sing “Come on, love/Let’s forget about all the things that we’ve done wrong/Just remember all of the things that we’ve done right/I’m in no mood to argue, and I’m in no mood to fight.” And lines about not letting the world getting us down, and about letting go of stress speak pretty strongly to us now. Ah, it’s difficult, isn’t it?

The second side opens with a ridiculously fun tune, “Animals In The Zoo.” This has a funky element to it, and is a good companion to “Apeman,” which was released the previous year on Lola Vs. Powerman And The Moneygoround, Part One. This is such a great song, and it has something to say. Check out these lyrics: “But the good guys lose and the bad guys win/That’s why you’re looking out and I’m looking in/But we’re all animals too.” This song had me up and dancing around my apartment like a goof before too long. It is my personal favorite from this album. The Kinks then totally switch gears with “Just Friends,” which sounds like a lullaby or something as it begins, and then takes on a different vibe when the vocals come in. There is something delightfully silly about this one, especially in the vocal approach at times. It is followed by “Whip Lady,” an instrumental track that begins in a mellow, gentle place, and then suddenly takes on some energy. It’s a fairly short number. Its length and the fact that it changes styles make it similar to the first side’s “Running Round Town.” And the tune’s title makes me really curious about the film.

“Dreams” is another of the album’s strong tracks. “When I look so far away/Please don’t wake me from my daze/I’m just wondering who I could be/If I lived inside my dreams.” When people used to ask “Beatles or Stones?” I would answer, “Kinks.” And this album is another reason for me to stick with that response. “Dreams” is followed by “Helga,” a pretty and intriguing instrumental, and another of my favorites. “Willesden Green” is interesting, and unusual in The Kinks’ catalogue. For one thing, the lead vocals are provided by bass player John Dalton, not by Ray Davies or Dave Davies. This is the only Kinks song to feature John Dalton on lead vocals. And it has an Elvis vibe. Then, there is the spoken word section. The record concludes with a very short instrumental rendition of “God’s Children.”

This special picture disc edition of Percy was released today, June 12, 2021. Record Store Day has been divided into two days this year, the second of which will be July 17th. 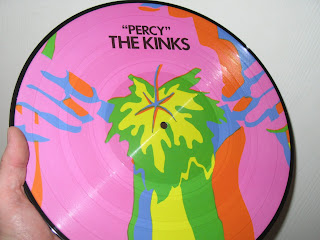 Posted by Michael Doherty at 4:40 PM