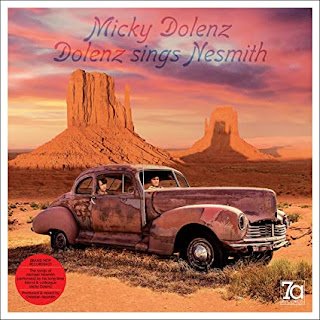 As we get excited for what The Monkees tell us will be their final tour (I’m always skeptical when artists make such announcements), Micky Dolenz offers a new record of Nesmith songs. Yes, on Dolenz Sings Nesmith, Micky Dolenz shares his interpretations of Michael Nesmith’s material, including some songs originally recorded by The Monkees. As Micky mentions in the record’s liner notes, the inspiration for this album goes all the way back to 1970 and the release of Harry Nilsson’s Nilsson Sings Newman. But it wasn’t until the pandemic provided him the time that he finally got around to making this album. Micky certainly puts his own touches, his own spins on the songs he’s chosen to cover, and the results are wonderful. Christian Nesmith produced and mixed the album, and plays most of the instruments on it. By the way, the record has a nice gatefold, with several photos of both Micky and Mike from throughout the years. And the album’s cover is a nod to the Harry Nilsson album. What I love is that Mike in the back seat looks to Micky in the driver’s seat, while Micky looks directly at us. And the record itself is a beautiful translucent aquamarine vinyl.

The album opens with “Carlisle Wheeling,” a song Michael Nesmith had recorded with The Monkees, but one which wasn’t included on any of the original albums. It was later included on the compilation Missing Links, released in 1987. Micky’s rendition has a cheerful vibe, even including some whistling, and a passionate vocal performance. It begins with a short string section, and includes an interesting section there in the middle. We can’t help but apply the line “But we’re both a little older, our relationship has grown” to Micky and Mike in this case. What a great way to open this remarkable and joyful album. Micky follows that with “Different Drum,” a song that was written before the beginning of The Monkees and then recorded by the Stone Poneys, who had a hit with it. It was also included in an episode of The Monkees television series, with Mike Nesmith playfully rushing through it. Micky gives us a lively rendition that features some nice work on harmonica.

“Don’t Wait For Me” is for me one of the album’s highlights. It is so beautiful and engaging and sweet, Micky’s vocals supported by some really good work on guitar. This is a track that demonstrates both Mike’s songwriting talent and Micky’s vocal talent, highlighting Micky’s ability to open up the heart of a song. “Don’t Wait For Me” is a song that was originally included The Monkees’ Instant Replay. Then Micky’s version of “Keep On” has a full-band sound. This is a powerful rendition. “Consider the source and ignore it, my friend/You’re doing just fine/Keep on keeping on.” How are those for some timely lyrics? And I appreciate the encouragement. This song is from the album And The Hits Just Keep On Comin’.

Micky Dolenz gets into some of the country flavor of Mike’s material, with the inclusion of pedal steel on “Marie’s Theme,” yet mixing in those pop sensibilities too, and delivering a good version. I am always struck by this song’s great opening line, “Her only remark was a closing remark.” This track makes me happy. It’s followed by “Propinquity (I’ve Just Begun To Care),” another song that was recorded by The Monkees, but not released until Missing Links Volume Three, and also included as a bonus track on a re-issue of the band’s first album. Micky’s take on it here is quite a bit different, and that is clear right from its start. It has more of a rock flavor and enthusiasm, giving us a different perspective of the song, and a new appreciation of it. Again, there is a tremendous amount of joy in Micky’s singing, and that can’t help but affect us as we listen.

The second side opens with an interesting rendition of “Nine Times Blue,” another song that was recorded by The Monkees, but not released until it was included on Missing Links. Micky slows this one down considerably, and it works incredibly well. The emotional impact of the song is all the greater. And there are more surprises before the end. This track is another of my personal favorites. It leads straight into “Little Red Rider,” which comes on strong, with Micky dipping into some serious rock territory and not holding back. I wonder if there is any chance of them performing this one during the upcoming tour. Seems like it would be a lot of fun. That’s followed by “Tomorrow And Me.” Micky Dolenz creates an interesting atmosphere at the beginning, one with a darker, lonesome vibe. This track features an interesting vocal approach and some pretty work on strings.

Then we get two songs that were included on official Monkees records during the band’s original run in the 1960s. The first is “Circle Sky,” from Head. And the version here is worlds away from that recording, placing it in a very different context. It is totally wild, certainly another of the record’s highlights. The second is “Tapioca Tundra,” which was on The Birds, The Bees & The Monkees. This too is different from the original version, though still with those distinctive elements in play, the psychedelic and the old-time vibes, the latter getting the focus in this version. Micky is clearly having a great time here, and delivers a delightful rendition. That’s followed by “Only Bound,” with a gentle and sweet sound that is part folk, part country, part pop, with some light psychedelic touches as well, and a beautiful vocal performance. “Only Bound” leads straight into the album’s final track, “You Are My One,” the focus here being on the vocal work as the song’s title line and “You are mine” are repeated, as on Michael Nesmith’s original version. This is a much shorter version, just a taste of the song added to the end of “Only Bound,” which works well. It’s a gorgeous ending to this record.

Dolenz Sings Nesmith was released on May 21, 2021 on 7a Records (the name coming from the introduction to the album version of “Daydream Believer”). 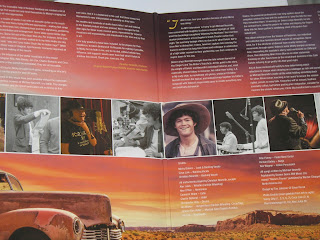 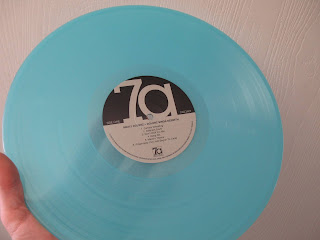 Posted by Michael Doherty at 5:23 PM