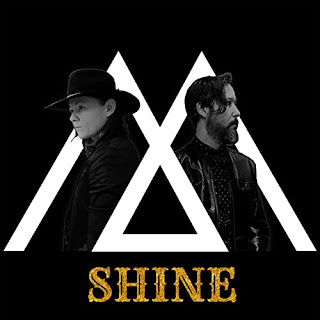 Moon is the duo of Chelsea Dawn on vocals and drums, and Dan Silver on guitar and synths. Based in Los Angeles, they had their first single, “I Got A Fever,” featured in the television series Colony. And then their song “Starfighter” was used in an episode of Shameless. Their latest release, an EP titled Shine, features all original material, the duo freely combining elements from different musical realms to create wild and intoxicating songs.

The disc opens with its title track, “Shine,” which begins like some great old gospel folk song, with a solid pounding and strong vocal work. It then kicks in to become an exciting song. Seriously, in a way this reminds me a bit of The Peak Show (can there be a higher compliment?), with that fantastic energy, and that mix of raw and electronic sounds. The lyrics aren’t anything complicated or substantial, but the vocals have such a great power behind them that it almost doesn’t matter what she’s actually singing. “What makes you shine, I wanna know/Wanna make you shine, I oughta know.” “Shine” is followed by “Never Cross Me,” which also begins with a solid pounding beat that seems to invite us to clap along. Or, more accurately, it demands that we do, and that our hearts thump in time with it, that our entire bodies succumb to this beat. I love the attitude and strength in Chelsea Dawn’s vocal delivery. Don’t dare stand in her way, for there is a tremendous force coming from her, radiating from her. “A sinner’s ghost and a bag of bones/Is all you are to me, son/The air is dry and I’m lost in time/You’re head deep under water/I tell you what, child/Never cross, never cross me.” This is my personal favorite track of the EP.

“Sweetest Magic” has more of a pop vibe, the lyrics delivered with a more amiable, tender sound, though still with an undeniable power. And there is also still a strong beat. “Don’t make me fall too fast/This is the sweetest magic/Take your time, let’s make it last.” That’s followed by “Down By The Water,” which features an interesting combination of sounds. There is a folk gospel type of vibe, the lyrics delivered with soul, and then there are some electronic touches, taking the song to a more unusual place. I also like that guitar work. “Down by the water/Down by the sea/I found religion/The religion is me.” The EP concludes with “My Oh My (I’ll Take You Home),” a compelling song with a delicious bluesy atmosphere. “Say goodbye to all that you know/You’re leaving town this time/All on your own/Try to hold your head up high.” I love the way this one builds. And there is something oddly comforting about this track. I suppose it is the concept of home, and the idea of this powerful voice accompanying us on that journey, making us feel safe. “Just lay your head on me/And I’ll take you home.”

Posted by Michael Doherty at 5:54 PM