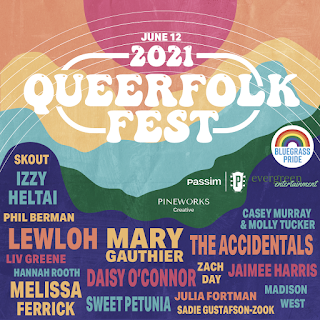 It is Pride Month, and on June 12th, several talented musical artists will be gathering virtually for the Queerfolk Festival, presented by Pineworks Creative and Club Passim, and sponsored by Bluegrass Pride. Some of these names will no doubt be familiar to you, and others might be new, but all are artists in the gay community, and this festival provides a wonderful opportunity for their voices to be heard and celebrated. Many of these artists are based in Massachusetts.

The show starts at 1 p.m. eastern time, with Melissa Ferrick kicking off the festivities. She will undoubtedly put on a great set, and is a perfect choice to set everything in motion and draw in and excite an audience. She is followed by a younger voice in the music scene, Lewis Loh, who goes by the name Lewloh, and who released his first album four years ago. I’m excited to get the chance to hear this performer. Then four singer/songwriters will perform in the round, those folks being Sadie Gustafson-Zook, Phil Berman, Madison West and Hannah Rooth. There is a second group later on in the afternoon who will also perform in the round – Liv Greene, Skout (Laura Valk), Zach Day and Julia Fortman. Also performing at this festival are The Accidentals, Daisy O’Connor, Sweet Petunia, Izzy Heltai, and Casey Murray & Molly Tucker. Closing out the show will be a set by Jaimee Harris and Mary Gauthier. Yes, this is going to be an excellent afternoon of music.

The festival will be available to watch on both the Queerfolk Fest and Club Passim websites. There is no ticket fee, so that everyone is welcome to watch. However, donations are strongly encouraged, with a suggested price of twenty dollars. This is the first Queerfok Festival, but the intention is to make it an annual event.

Posted by Michael Doherty at 12:01 PM