Things are starting to resemble normal again. As more people get vaccinated, it will be safe for us to go back to clubs and bars (except of course in backward places like Mississippi and Alabama, where people are still not taking this seriously). I can’t wait to see live music again, and have begun purchasing concert tickets for shows coming up in the fall. In the meantime, artists have continued to release music to help us through these strange times. Here are notes on a few new jazz releases you might be interested in. 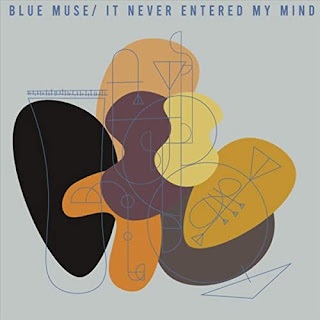 Blue Muse: “It Never Entered My Mind” – Blue Muse is a band based in Jacksonville, Florida, made up of Sarah Lee on tenor saxophone, Steve Strawley on trumpet and flugelhorn, Lance Reed on trombone, Jarrett Carter on guitar, Cody Wheaton on bass, Javian Francis on piano, John Medico on drums, and Jack Miller on drums. They put out their first album in 2015, and have now followed that with It Never Entered My Mind, which features music composed by Wayne Shorter. Half of the album’s six tracks were written by Shorter, including the disc’s opening number, “One By One.” This group delivers a good, lively rendition, which includes a series of excellent leads, each of the musicians getting an opportunity to shine. I especially like the work on piano and saxophone. That’s followed by the album’s title track, written by Rodgers and Hart, with an arrangement by Jarrett Carter. The horns have a wonderfully somber and pensive sound, and, as you might expect, this rendition features some good work on guitar. There is a timeless vibe to this rendition. Blue Muse’s rendition of Horace Silver’s “Nutville” opens with a short, but cool drum solo by John Medico, and features some catchy work on bass and more excellent work on drums throughout, but it is the horn section that dominates this track and guides its course, those instruments singing and flying at times. We then get the second of three Wayne Shorter pieces, “Sweet ‘n’ Sour,” and interestingly it is the guitar that gets the first leads and really sets things in motion. Wonderful stuff there. That’s followed by a good rendition of “Freedom Sound,” which was written by Joe Sample and used as the title track for the debut LP from The Jazz Crusaders. I love the lead on bass in this version. The disc concludes with Wayne Shorter’s “Ping Pong,” this lively rendition hopping and moving at a good pace. This album was released on April 23, 2021. 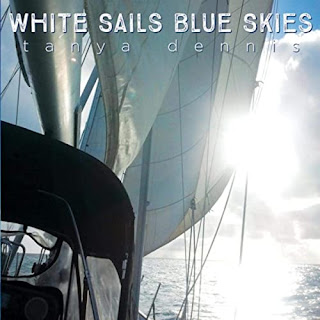 Tanya Dennis: “White Sails Blue Skies” – Tanya Dennis is a vocalist and violinist, as well as songwriter, and her new album features mostly original material. Titled White Sails Blue Skies, the music here right the beginning has the feeling of being out on a sail boat, near islands, away from the bustle and concerns of the city. In that first song, “Chiaroscura,” she sings “We ebb and we flow/Like the moon on the water/Life shapes and shifts/Tide and drift.” That features some nice work on both guitar and piano, but it is Tanya Dennis’ warm voice that we latch onto as we travel through the world of this music. Accomplished harmonica player Hendrik Meurkens joins Tanya Dennis on “Till You,” a love song about finding that special someone. “I’d be permanently blue/Till you.” Meurkens is giving plenty of opportunity to do what he does best on this track, and there is also some wonderful work on guitar. On the beautiful and haunting “Slow Reckless Tango,” we get to hear Tanya Dennis on violin. The album’s title track, “White Sails,” has a smooth, pleasant vibe. “Clear morning/Out on the bay/The breezes are blowing/Blowing our way.” “The World Can Do Without Us Today” is one of only two songs on this release not composed by Tanya Dennis. This one was written by Ronnie Hughes, and features Hendrik Meurkens on harmonica. Meurkens also contributes his excellent playing to the other track not written by Tanya Dennis, “Indigo.” “Desolation Sound” has an undeniable allure, and features some beautiful work by Tanya Dennis on violin. I also like Scott Halgren’s work on piano. The disc concludes with “All To Myself,” which has a cheerful vibe. “Maybe this is something I should ignore ‘til I come to my senses/And get my feet back under me/What a delicious distraction.” This album is scheduled to be released on June 25, 2021. 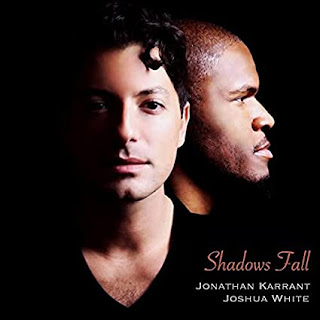 Jonathan Karrant and Joshua White: “Shadows Fall” – Vocalist Jonathan Karrant and pianist Joshua White come together to deliver an excellent album of standards and a few surprises. The album opens with one of those surprises, “The Best” (here listed as “Simply The Best”), written by Holly Knight and Mike Chapman, and originally recorded by Bonnie Tyler, and then by Tina Turner. The arrangement here is quite a bit different from those recordings, obviously, and Jonathan Karrant’s vocal approach is likewise different, yet just as passionate as those two singers, with a wonderful warmth. This is a beautiful rendition, and that work on piano seems able to lift our hearts to great heights. That is followed by a lively and fresh version of “My Romance.” Another of the surprising choices is “I Try,” Macy Gray’s big hit, and this duo gives us a pretty and thoughtful take on it. That’s followed by Mose Allyson’s “Stop This World,” a song with lyrics we can relate to these days, such as “Stop this world, it’s not making sense.” Jonathan Karrant and Joshua White are clearly have a good time with this one, and the results are delightful. They add a cool spoken word section in the middle: “Now when I wake up in the morning and I take a look around/I see a world that keeps on bringing me down/So much struggle, pain and hate.” Indeed. Another song that has a great appeal in these strange days is “Wrap Your Troubles In Dreams,” and these two talented musicians present a really good rendition that begins with some playful scat. They also give us beautiful and moving renditions of “My One And Only Love” and Cole Porter’s “So In Love,” and a joyful version of James Taylor’s “Your Smiling Face.” This album was released on May 21, 2021. 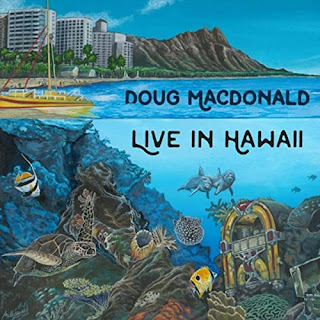 Doug MacDonald: “Live In Hawaii” – The new album from jazz guitarist Doug MacDonald gently swings from its opening track, a really nice rendition of Harold Arlen’s “My Shining Hour.” There is no waiting before you get some excellent work on guitar, with MacDonald’s lead starting off the track. I’m generally not a huge fan of vibraphone leads and solos, but Noel Okimoto’s lead here works so well, and seems to pick up right where MacDonald’s guitar left off, and continues that great feel. Dean Taba follows that with an excellent lead on bass. But what is really striking is that each musician is remaining within a certain structure, so that each lead doesn’t feel like a separate piece as is sometimes the case. The musicians share a common goal, and are really listening to each other, working together, rather than trying to show off with each solo. “My Shining Hour” is followed by “Cat City Samba,” one of two original compositions by Doug MacDonald, and one that MacDonald also included on The Coachella Valley Trio’s Mid Century Modern, which was released last year. Actually, “My Shining Hour” was also included on that release, and opened both albums. Darryl Pellegrini’s work on drums keeps things moving here, and there are some short drum solos that I love, but it is Doug MacDonald’s delicious guitar playing that is the heart of this rendition. Doug MacDonald also delivers a very cool rendition of “Blues In The Closet,” a track that brings a smile to my face the moment it begins. That work on bass is so damn enjoyable, and this album is honestly giving me a new appreciation of the vibraphone. Noel Okimoto’s work here is excellent. The second original track on this disc is “Bossa Don,” a tune MacDonald also included on his View Of The City album, and one with a good, relaxed groove. And then it is the drum solo that makes this version of “Lester Leaps In” stand out for me. The album concludes with “Stranger In Paradise,” another tune that was also featured on Mid Century Modern. There are some playful touches at the end. This album was released on May 4, 2021. 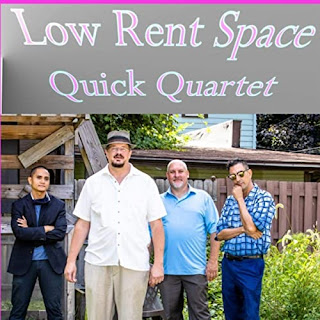 Quick Quartet: “Low Rent Space” – The new album from Quick Quartet features all original material written by Jason Quick. The group, based in Toledo, is made up of Jason Quick on guitar, J. Ronquillo on bass, Zac Kreuz on drums, and Ben Wolkins on trumpet, with Ben Maloney joining them on keys for a few tracks. The album opens with its title track, which has a cool, kind of funky rhythm. This number is performed by the core trio, without trumpet, and so focuses on that guitar work, which has certain rock influences in its style and a progressive feel at times. Toward the end, there is a good lead on bass. Ben Wolkins then plays trumpet on most of the rest of the album’s tracks, beginning with “Strange Waltz,” which features his work on trumpet right from the start. This tune has a relaxed, easygoing vibe, and is one of the tracks to feature Ben Maloney’s work on keys. Maloney delivers a nice lead approximately halfway through. That’s followed by “Vultures Wear Disguises,” which is my favorite song title from this release. This one also features Ben Maloney on keys. It has an urban atmosphere, and provides a good warning, for vultures are everywhere these days, though some of their disguises are easy to spot. “Flippin’” is one of my personal favorites. I love the way it slinks and slides in, and gets you caught up in its cool vibe. It is fairly early in the track when we get that delicious lead on bass. And check out that wonderful work on trumpet. Then Jason Quick’s guitar lead struts and dances and owns the space. That’s followed by another of the disc’s highlights, “Mugatu,” which I love mainly for that lead on guitar, and the way it is supported by a great and fun rhythm on bass and drums. Zac Kreuz totally delivers here. The cool vibes continue on “Dirty Bird Blues,” which features more excellent work on guitar, and a really good drum solo. As it began, the disc concludes with a piece performed by the core trio, “Illusion,” an unusual tune that opens with some solo work on guitar and keeps the listener on edge through much of it. This album was released on April 1, 2021.
Posted by Michael Doherty at 1:32 PM