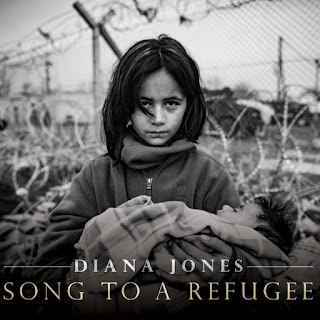 A decade ago, Diana Jones released High Atmosphere, which quickly became one of my favorite albums, not just of that year but of any year. Since then, she released Museum Of Appalachia Recordings and a live album, and now has a new studio album out. Titled Song To A Refugee, it features all original material, some excellent songs that speak to our troubled times. Several of these songs are about the crisis at our border, where families have been separated and children placed in cages. Diana Jones is the perfect artist to share these stories, for there is so much passion in her voice, so much love and understanding. For these are really songs about the human spirit. Joining her on nearly all of this album’s tracks is David Mansfield, who plays guitar, mandolin, violin, dulcimer, and mandocello. Jason Sypher plays bass on many of the tracks. Diana Jones also gets some help from special guests, including Richard Thompson.

The album opens with “El Chaparral,” a beautiful and touching song about that crossing point between Tijuana and San Diego, and about the horrors that the people passing there are trying to escape, and the suffering they endure to get there. This track features some really nice work by Will Houlshouser on accordion. The song’s last line is “Only steps away from America,” and the song ends there with the word “America” remaining in our heads, and whatever that word might mean to us at this point. That’s followed by “I Wait For You.” a song about a girl who is sold to a husband and eventually flees to a new country, seeking asylum. “There were no words to say/No place where we were safe/No proof that I was born to my land.” Richard Thompson joins Diana Jones on guitar and backing vocals on this one. “Song To A Refugee,” the album’s title track, is a pretty and moving song. While everything was shut down because of the pandemic, Diana Jones shared some of the new material in an online show presented by Club Passim, and this is one of the songs she performed. Here is a taste of the lyrics: “None of us know where our footsteps will fall/And what will become of the place that we love/The place that we think of as home.” David Mansfield provides some beautiful work on both violin and mandolin.

Diana Jones begins “We Believe You” on vocals, and soon other familiar voices join her. Steve Earle, Richard Thompson, Peggy Seeger and Zara Phillips all sing on this powerful and gentle track. During the awful and painful and infuriating time of the previous administration, an air of distrust was deliberately fostered. Anyone who was from another country was suspect, assumed a criminal, and those who came into our country seeking asylum were instead put into cages. And so to say simply “We believe you” becomes incredibly powerful and heartening. “We believe you came here for asylum/We believe you want to live in peace/We believe you did what we all would do/There’s no difference between you and me.” This is another song that Diana Jones performed during that online Club Passim show. By the way, Diana Jones released a video for this song, which is certainly worth checking out. That’s followed by “Mama Hold Your Baby,” which deals with the separating of families at our border, and the placing of children in cages. When will certain officials be held accountable for these atrocious actions? I am relieved that the racist conman is no longer in the White House, but until he is in prison, democracy remains in danger. “All the way to America/Your baby in your arms/Border guard detain you/You have done nothing wrong.” And then she repeats that last line for emphasis.

“Santiago” also deals with those who seek a better and safer life in this country, and was partly inspired by a photo that Diana Jones saw of a man holding a young child at the border. “I have never been a father/But I would like to be/To this boy named Santiago/Do not take him, please/I promised his mother/Do not take him from me.” This song makes excellent use of dramatic pauses, as in that line “Do not take him from me,” where she pauses before “from me.” Then the Chapin Sisters join Diana Jones on vocals for “Ask A Woman,” a more cheerful-sounding song. It addresses our troubled times, but with a positive and optimistic sense. “Why we get up in the morning these days/If you worry where the light has gone/If it’s worth your way home in the dark/Ask a woman with a child in her arms.” In addition to the vocal work, I really love that violin. The opening line of “The Life I Left Behind” is “If I could tell the story of the life I left behind,” and then she endeavors to do just that. There are many powerful lines, and the lyrics that especially stand out for me are these: “I saw the light change slowly/Behind my mother’s smile/Then the war came quickly/And the bombs rained from the sky/In the end, there was nothing/Nothing left at all/Dust and empty ruins/Everyone was gone.” This track also features more beautiful work on violin.

“Where We Are” is told from a child’s perspective, after being separated from her parents and caged. “They say the chain-linked cages are really walls inside of walls/There are children and more children, and the walls go on and on/This is where we are.” That last line works both to describe the actual situation of the child and the feelings of all of us in this country. This is where the country is now. It has been an unsettling thought. And again, though I am relieved that we have an actual president again, a lot is left to be fixed. “Where We Are” is followed by “Humble,” a gentle and pretty song. Check out these lines: “At sundown you had everything/Woke up to nothing/It all slipped away/When you weren’t looking/Now you wish you could sleep/One more night in that peace/With the one that you love/Breathing beside you.” And, yes, David Mansfield delivers more good work on violin on this track. And on the one that follows, “Love Song To A Bird.” I love that beautifully sad violin. “Heaven seems to catch her wings/And my heart breaks for a song/Love song to a bird that flew/And she never knew, and she never knew.”

“The Sea Is My Mother” takes place in a boat, and is a song of hope and fear. “She calms the waves so I can sleep/Dream of peace and something more/Waiting on a distant shore/My sister dressed me as a man/She gave me all the money she had/She kissed my cheek, she pressed my hands/Be quite as a grave, quiet as you can.” But the vessel is doomed. So too is the dream? The album concludes fittingly with a song titled “The Last Words.” Glenn Patscha joins Diana Jones on piano on this track. It is a song of one who is dying. “You whispered to your mother/Mother, I will be with you soon/Your arms reached out for your brother/As the quiet filled the room.” The approach is so gentle, and the song so beautiful, and ultimately soothing, with its final line, “I am not afraid to go.”

Song To A Refugee was released on June 11, 2021 on Goldmine Records.

“We Believe You” music video.

Posted by Michael Doherty at 11:49 AM