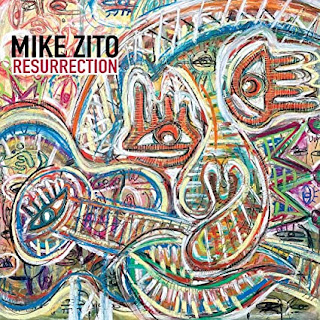 In 2019, blues guitarist Mike Zito released a tribute to rock and roll guitarist Chuck Berry, with several guest guitarists joining him. Then last year, when everything was shut down due to the pandemic, he returned to some original blues, giving us Quarantine Blues. On that release’s title track, he sings, “I’ve been stuck inside my mind/Stuck inside this hole.” We’ve all been in touch with that feeling, right? Now that people are getting vaccinated and the world is opening up, Mike Zito has a new album ready to help us celebrate. It’s titled Resurrection, which feels just about right for us in this time, doesn’t it? After a year of isolation and death, after a year when democracy was attacked by our country’s own people (and continues to be), we are looking for a rebirth of sorts. There is the sense that we will come back stronger and more united for having gone through this crazy time. Or, at least there is that hope. We can all use a fresh start, another chance, and that is expressed in that word resurrection. This album features mostly original material, written by Mike Zito. Joining him on this album are Zach Zito on acoustic guitar, Matthew Johnson on drums and percussion, Doug Byrkit on bass, Lewis Stephens on keys, Eric Demmer on saxophone, Fernando Castillo on trumpet, and Lisa Leuschner Andersen on backing vocals.

Though the album contains mostly original material, it opens with one of only a few covers, “I’ll Make Love To You Anytime” (here titled “I’ll Make Love To You”), which was written by J.J. Cale and included on his 1979 LP, 5. This version has a heavier sound than the original, and features some good work on electric guitar, and some great stuff on saxophone at the end. That’s followed by “Don’t Bring Me Down.” “You’re living on lies,” Mike Zito sings near the beginning of this one. He could be singing about an entire segment of our population, couldn’t he? A little later in the song he sings, “You’re looking for a victim/Yeah, someone you can hurt/But not today/I won’t take the bait/I’ve got no time/For those who hate.” Oh yes, now he’s singing for the rest of us. It’s difficult, especially on social media, but it is best to refrain from taking the bait. Don’t give those bastards the time of day. “I don't play that game/Politics and religion/It's all the same/I just want to live/I want to live my life.” This track features a delicious lead on guitar. Then “Dreaming Of You” is a love song about a man who is often on the road. “I’m dreaming/I’m dreaming of you/That’s all I do.”

“In My Blood” has a cool, delicious vibe right from its start. “I can’t sit still/No matter how I try/Everywhere I go/It don’t last long/I turn around/And then I’m gone.” Lisa Leuschner Andersen adds a beautiful layer with her harmony vocals on this track. This is one of my personal favorites. “Bought my dinner/Brought me wine/Shared her soul/But I didn't share mine.” That’s followed by “Presence Of The Lord,” the second of the album’s covers, this one was written by Eric Clapton and originally recorded by Blind Faith, and included on that group’s only studio album. Mike Zito delivers a powerful, passionate rendition, this track containing one of the album’s best vocal performances. Then “When It Rains” has a steady pounding beat, over which the other instruments seem to climb and fall at the beginning. And when I hear a line like “Told so many lies,” I still can’t help but think of the previous resident of the White House. When will we be able to drive him from memory? Check out these lines: “They say once you hit bottom/Only place to go is up/But they never met this woman/She broke my loving cup.”

“You Don’t Have Me” is a good solid rock tune, full of attitude and rhythm. “You’ve got everything that a girl could want/Oh baby, but you don’t have me/No, you don’t have me.” Later, as the song is winding down, he changes his mind, singing, “You got me right where you want me, girl/You got me making your bed/You got me baking your bread.” That’s followed by “Damned If I Do,” a slower gem, featuring the horns and some really good, expressive work on electric guitar. “I should walk away, babe/But you know I won’t.” Then “Running Man” is a fun track, written by Mike Zito and Guy Hale, who co-founded the label Gulf Coast Records. It features the horns, and includes some great stuff on keys. And soon we learn just what sort of running this character is doing, when we hear the line “Every four years, roll out the show.” Check out these lyrics: “Great big smile, innocent of guile/Same old speech, mile after mile/I kiss your babies, I pet your dog/All assurances are lost in the fog/You keep on falling for the same old lies/Send me to govern, yeah, watch the demise/It’s the same old story, year after year/Politics of hope, shaped by fear.” The album’s final cover is “Evil,” written by Willie Dixon. The band jams on this one, and I especially like the work on keys. The album then concludes with its title track, “Resurrection,” a soulful number. “Well, we need a resurrection/Yes, we need a second chance.”

Resurrection is scheduled to be released on July 16, 2021 on Gulf Coast Records.

Posted by Michael Doherty at 1:05 PM