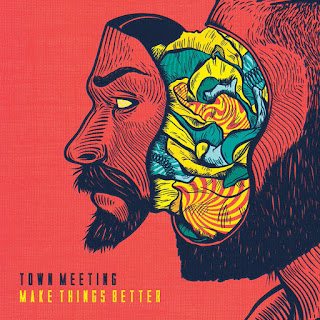 Town Meeting is a group based in Boston, with a wonderful folk rock sound and a talent for writing interesting and engaging lyrics. Last year, they released an excellent album of all original material titled Make Things Better. This release found some changes within the group, with the addition of a new member, bassist Derek Fimbel, and with percussionist Russell Condon moving to a full drum kit. The band is made up of Luke Condon, Russell Condon, Brendan Condon, Tim Cackett and Derek Fimbel. This album is their third LP, following From The Green. By the way, this record was put out on glorious clear yellow vinyl.

The record opens with “Bleeding Hearts,” and right away the group’s vocal skills are apparent, this track beginning with their voices over a steady beat. “If hummingbirds can hum along/Then I can make it through.” When it kicks in, it has a wonderfully positive folk rock sound, and some lyrics that are just exactly right for this time when the country begins to emerge from the pandemic and we move into summer: “Take me out, take me outside/Take me out, take me out now.” And check out that joyful harmonica work. “And it’s not forever/Nothing is, and that’s okay/This mystery is all I need/And it’s not that far away.” The delicious positive vibes continue with “Answers.” I love that harmonica at the beginning. At first, the lyrics show someone who is standing on his own, and we start identifying with him: “You won’t decide my fate/You don’t belong here/You don’t get to call my name/You don’t know me.” Then, after a moment, there is a change: “But if you’ve got answers, then I’ve got a reason to wait.” Ah, we’re all looking for answers, aren’t we? It is likely no one has them, but the search is still worthwhile somehow. This song had me on my feet before the end. Yes, my apartment becomes my private dance club at times, what of it? There is a false ending, and the song comes back in with even more power, more joy, as they repeat “Stay.”

There is something playful about “A Goddamn Song.” The opening line at first seems to question the existence of a god, “Is there a god,” but then continues into next line, “Damn reason why I keep on keeping on.” I love that kind of thing, how it plays with expectations and so keeps us on our toes, drawing us in to pay closer attention. “Show me a sign/I said, so she stuck her middle finger out/You go take that precious time/And you can figure the whole thing out.” And yes, this track features more good work on harmonica. Something about this song causes me to smile like there is nothing wrong in the world. And check out these lines: “If you build it up/They’ll break you down/It’s just the consequence of living here/With both feet on the ground.” As at the beginning, there is a pause in the middle of the word “goddamn” in the line “I need a goddamn song,” for a moment catching us. And then when I think things can’t possibly get better, there is a cool jam at the end, featuring some great work on drums, guitar and harmonica. That’s followed by “The Fourth Verse,” which has a more relaxed, gentle vibe at the beginning. This song gives us the album’s title in the line “We just need a little time to make things better,” and at that very moment, the song takes on a bit more power, as if they are beginning their attempt to improve things right then. I love the line “And why is it always a monologue when you just want The Beatles.” We’ve all experienced that, right? Turning on the radio, and needing a good song, and instead finding ourselves being spoken at. I’m always in need of that good song, and so I usually turn to records like this one rather than risk the radio. These guys write so many good lines, like these: “And once in a while you’re an open book, but the rest of these hours/Are spent trying not to be the person you probably already are.”

The first side of the record concludes with “Sometimes The Moon,” which begins gently with acoustic guitar. The vocals have more of an intimate sound at the start. Check out these lines: “I started to laugh at myself as I’m sometimes prone to do/If I’ve gotten decent sleep, or I’m eating decent food.” And then the song’s title line made me laugh out loud the first time I heard it, “Sometimes the moon just fucks me up.” But the song holds more surprises, as it immediately turns more serious, and our emotions are pulled in a different direction. Life is like that, and this song has that kind of truth to it. You know? “I can’t fight myself right now, I would rather try to sleep/The night was loud and wouldn’t quit/Like nothing good could ever fit.”

The second side begins with “Pretend (It Isn’t Strange),” which fades in like a bright light approaching us and soon enveloping us. And then this short instrumental track is over. Of course, now I’m wondering about the parenthetical part of the title, and whether it means that we should pretend things aren’t strange, or if it means that it’s not strange to pretend. That’s followed by “Forget Me Nots.” “I saw the devil and he passed me by” is such a good line, one that gets me to imagining the situation, and wondering as to the reason. This track features some really nice harmonies. It’s not long before it kicks in with a great bluesy force, and I love when that harmonica begins to really wail. The song becomes something of a wild jam in the middle there. And that last section with the repeated “You’d better pray for rain” is fantastic and powerful, and will speak to certain sections of the country right now during these crazy heat waves. The harmonica has a much sweeter tone as “Fuck The Man” begins, which itself is something of a surprise too, considering the song’s title. This is not an angry-sounding song, even if there is some frustration expressed in lines like “Just trying to make it through/But can’t seem to ever catch a break.” But really this song celebrates friendship and humanity and those who help each other get through those tougher spots.

“Eulogy” has more of a country sound, particularly in that rhythm. Here is a taste of the lyrics: “I think I owe you an apology/But maybe you would settle for my eulogy/‘Cause we’ve all grown up and found us wives and hurt/And we only gather now/When one of us returns to/The dirt.” Those lines really hit me, the truth of them, especially as time rockets along, and I look around and realize I haven’t spoken to old friends in a long time. This entire album is excellent, but this song stands out for me, in part because of that emotional punch it delivers. There is something beautiful about “Silence Speak,” which closes out the album. “You told me a story with your legs/And I wrote it down in my soul/Never a word was spoke/Ours is a tale of hope.” This song also seems to provide an answer to the question I had regarding “Pretend (It Isn’t Strange).” This track builds in force as it goes, and then suddenly opens up into a sweeter plateau near the end, and the final line is delivered a cappella: “Can we let the silence speak.” 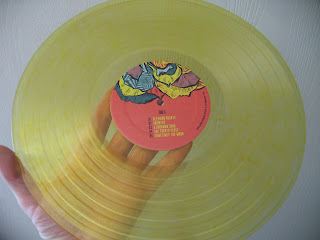 Posted by Michael Doherty at 11:17 AM