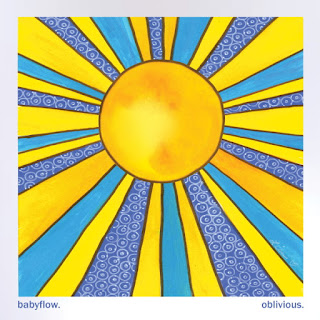 What strange times we live in, eh? I’m sure I’m not the only one who is completely exhausted by the pandemic, tired of wearing a mask, and even more sick of the lingering idiocy of the Republican Party, which is still residing somewhere in Donald Trump’s lower intestine. Well, a sticker on the plastic wrap of Oblivious, the debut vinyl release from Babyflow, announces the album is “Your indie solution to your Covid Trump hangover.” Perfect. We need that. Babyflow is the project of Anthony W. Rogers, and this album follows his 2018 release One Day (A Journal). Like that album, this one is wonderfully quirky and raw, and does not shy away from addressing our current troubles and those who are, at least partially, responsible. Some of the tracks are humorous commercials for things like no-test health insurance and invisible masks, for while we often have the urge these days to scream, it is usually better to laugh. Anthony W. Rogers provides most of the vocals and plays most of the instruments, but does get some help from Blake Rogers, Joe Rogers, Aaron Liller, and Sean Liller, along with a couple of guests on certain tracks.

The album opens with “Daddy Got Played,” which begins with a bit of a recording of Corey Lewandowski, Trump’s campaign manager who was, like everyone else in the Trump world, caught in a lie. In the clip, he doesn’t deny lying, but rather claims, “I have no obligation to be honest with the media because they’re just as dishonest as anybody else.” This is a playful, yet dark, opening track about how people fall for certain things, and how ethics have disappeared from a certain segment of the population that laughably continues to claim some sort of moral high ground. Bryson Bush joins Anthony W. Rogers on this track on trumpet, percussion and backing vocals. That’s followed by “Substitute For Science,” a kind of strange, cool instrumental track written by Blake Rogers and Anthony Rogers.

Before One Day (A Journal), Anthony W. Rogers released an album titled Wrong. This was in 2015. A title track was written for that release, but ended up not being included. Now he has recorded a new version of the song for this release. It has something of a catchy pop-rock sound. “But me, I never thought they’d ever try to leave/No one else I’d seen venture to try/They just go from shit job to shit job/Lose confidence, ambition, and they want to get high.” We then get the first advertisement of the album, “Covid Beach,” calling kids to come down to a super spreader event. This track, which has a delightful surf sound, is a song for all those selfish bastards to whom spring break is more important than the health and safety of anyone they know or meet. Check out these lines: “Everybody’s always trying to tell you what to do/You can’t make me wear anything/Even if it’s killing you.” And there is a spoken word section: “Make your way on down to Covid Beach/Where food and rides for the week are fifty percent off/While masks are a hundred percent off at Covid Beach.” I am also reminded of that asshole Kirk Cameron and his fellow cult members who decided to hold their own super spreader events, gathering at parking lots and beaches in southern California and singing without wearing masks.

The fun continues with “Greaser,” one of only two tracks on the album not written or co-written by Anthony W. Rogers. It was written by Jon Johnson and Sean Liller. This is a glorious unabashed rock tune with kind of a raw sound and a certain sense of humor, along with some serious guitar. Bryson Bush and Pierce Miller join Anthony W. Rogers on this one. That’s followed by the second commercial, “3 For $12.99.” The sticker on the record’s shrink wrap lists the title as “Bleach Tabs 3 For $12.99,” so you know exactly what he’s singing about here. This one was written by Blake Rogers and Anthony W. Rogers. Oh, so many of our problems would have been solved if only all of Trump’s supporters had followed his suggestion to inject themselves with bleach.

The second side opens with an oddly pretty and intriguing instrumental track composed by Blake Rogers titled “William Burns.” In 1907, William Burns, a black man, was lynched in Cumberland, Maryland. Racism continues to be a deadly problem in this country, as the current attacks on Asian citizens and Derek Chauvin’s murder of George Floyd so clearly show. This track has a different sound from the rest of the album, helping it stand out. It is the second of the two tracks not written or co-written by Anthony W. Rogers. Then the “Invisible Mask” commercial comes on like a 1960s rock song, poking fun at dipshits who believed the Trump lie that the pandemic was a hoax. But for those who want to appear to be following Trump’s lead but still want to be safe, the invisible mask is available.  “Hurry, order, the supply is limited/No one’s ever, ever going to know/It’s just like an empty box.”

“Wish Away” (or “Wish Myself Away,” as it listed on the back of the record jacket) will likely appeal to a lot of folks, as we deal with isolation and remember our lives before the pandemic. Things have changed, and they may not go back to the way they were before, so we have to come up with alternatives. We have to find better ways. This track becomes a cool jam, like something Neil Young might have recorded in the very late 1960s. That’s followed by another of the commercials, this one titled “NTHI,” standing for “No test health insurance.” This has a strange, humorously dark and ominous sound. “No test health insurance, the simplest way/You never have a diagnostic test, no way.” This one was written by Anthony W. Rogers, Blake Rogers and Aaron Liller.

“Listen” is one of my personal favorites. It is a song concerning the Black Lives Matter movement, and how some people claim or choose ignorance. Are those who say “All lives matter” deliberately missing the point? Well, this track has a very cool sound. That’s followed by the final advertisement of the album, “Karen For Hire.” I have to say I’m not a fan of using a person’s name to describe a type of person. That being said, this is a fun track. The record concludes with “Rain Cloud,” a surprisingly sweet and optimistic number. Well, we need this, don’t we?

Oblivious was released on January 1, 2021 on Wildflow Records, in a limited edition of only 250 copies. It is also available digitally, but it’s best to pick up a copy of the record.

Posted by Michael Doherty at 5:00 PM