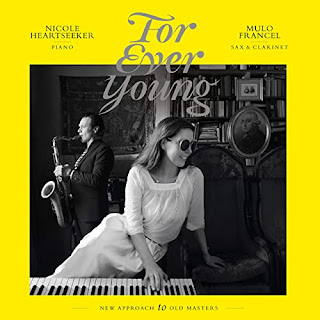 Classical music meets jazz in Forever Young, the wonderful new release from saxophonist Mulo Francel and pianist Nicole Heartseeker. The music takes us to a different age, one that perhaps never really existed, but one that music lovers will be thrilled to visit. On this album, the two musicians cover music by Bach, Handel and Schubert, or rather they cover themes from those composers, adding their own style and spin to them. The arrangements are by Mulo Francel, and both Francel and Heartseeker produced the album. As far as I can tell, this is only the duo’s second album together, following 2009’s Angel Affair, on which Nicole Heartseeker plays organ.

The album opens with a beautiful piece, “Delight Inside,” an improvisation on Giulio Caccini’s “Ave Maria.” Mulo Francel begins this track with a solo, his work having a lonesome, yet pretty sound. Then Nicole Heartseeker’s piano work has a wonderful tenderness and seems to express some sorrow. Her work has an introspective quality, while Mulo Francel seems to reach out.  The combination is captivating, an excellent start to the album. They then move to Bach’s “Sinfonia In F Major,” delivering a gentle, soothing, pleasant rendition. That is followed by “The Wide Point,” the musicians’ take on George Frideric Handel’s “Larghetto.” This is an interesting duet, with an expressive yearning from Mulo Francel.

“Our Serenade,” based on Franz Schubert’s “Ständchen,” begins with piano. This track starts in a rather mournful, dark place, a city at night, but soon grows and rises to become a passionate and even uplifting piece with its own tender and loving quality, particularly in the work on saxophone. This is one of my personal favorite tracks, and the touching theme will likely be familiar to most people, even those without much interest in classical and romantic music. That’s followed by “Mia Bella.” While most of the pieces on this album are based on the work of classical composers, this track is actually an original piece by Mulo Francel. And on this one he plays mandolin as well as saxophone, the sound conjuring images of a European café outside of time, a romantic setting. I love music that can transport us, as this piece does. This one ends up being another of my favorites.

“Let Me Weep” begins with some wonderful solo work on saxophone. It is nearly a minute before Nicole Heartseeker joins him on piano. This is an improvisation on another piece by Handel, the gorgeous and powerful “Lascia Ch’io Pianga,” this track featuring some stirring moments. Nicole Heartseeker and Mulo Francel then offer a beautiful rendition of Jules Massenet’s “Ouvre Tes Yeux Bleus.” There is something both magical and relaxing about the way they present this song, taking us to a dreamlike world where there is no danger or harm, only kindness. Listening to this piece, I feel my cares and worries evaporate. And speaking of dreamlike, that track is followed by a piece that bears the title “Dreamlike,” and is an improvisation on a composition by Schumann, “Träumerei,” which translates to “reverie” or “daydream.” And yes, there is that sense, that element to this one too, though in a way this one seems more grounded. It feels of another time, yes, but more a memory, though enhanced through fondness, than a dream.

“Enlarged Heart,” an improvisation of one of Vivaldi’s sonatas for cello, has a sweet sound, an optimistic and romantic vibe. If you need music to help you remove yourself, even momentarily, from the current troubles and pains, I encourage you to check out this album. “Enlarged Heart” is followed by “Walking Far,” a gorgeous improvisation on Marcello and Bach’s “Adagio” that has the engaging sense of heartache and passion you’d hope for. It is stunningly beautiful and moving. You might find yourself holding your breath at moments, as you let the piece take over. Also incredibly moving right from its start is “Lazy Days,” an improvisation on “Prelude Op. 11 No. 1,” composed by Anatoli Konstantinovich Ljadow. They follow that with a second composition from Jules Massenet, “Elégie,” this one having quite a different vibe from the other piece, with a darker, more mournful sound. Then their rendition of “‘A Vucchella” is playful, light and totally enjoyable. This one had me smiling within just a few seconds. It is a delight, the two musicians engaging in a dance that seems to lift both them and us right off the ground, like angels who don’t take heaven too seriously.

While the album began with an improvisation on Caccini’s “Ave Maria,” Nicole Heartseeker and Mulo Francel also deliver a wonderful rendition of Argentine composer Astor Piazzolla’s “Ave Maria.” They then return to the work of Handel with a moving and beautiful version of “Minuet In G Minor,” another of the disc’s highlights. That’s followed by an excellent rendition of Gabriel Fauré’s “Après Un Rêve,” returning to the theme of dreams and daydreams. And who doesn’t wish to enter into a world of dreams in these days when reality is so hazardous, particularly a romantic dream?  This track has a more urgent feel to it, rather than that sense of lightly, lovingly drifting through a hazy realm. This excellent album concludes with a second piece composed by Astor Piazzolla, “Oblivion,” a beautiful piece tinged with the sadness of forgetting.

Posted by Michael Doherty at 3:19 PM