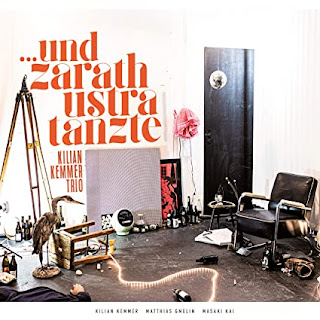 I’ve never read Friedrich Nietzsche’s Thus Spoke Zarathustra, though I do like the piece by Richard Strauss bearing that same title, which I first heard in 2001: A Space Odyssey, and later saw Phish perform. Like Strauss, pianist Kilian Kemmer was inspired by Nietzsche’s work, and the new album from Kilian Kemmer Trio is titled Und Zarathustra Tanzte. These tracks, most of which were composed by Kilian Kemmer, focus on the idea of the eternal return, that all events repeat themselves, something I’ve found rather frightening and depressing, but which here is almost cause for celebration, leading Zarathustra to dance. Thus, the album’s title. Perhaps it is time to take another look at this concept, for if someone can see it as inspiring a dance, it is possible I’ve been looking at it all wrong. At any rate, this music is excellent and engaging. The trio is made up of Kilian Kemmer on piano, Masaki Kai on bass, and Matthias Gmelin on drums.

The album opens with “Ewige Wiederkunft,” which means “Eternal Return.” This track begins with some pretty, thoughtful work on piano. The piece’s theme, as it is repeated, somehow takes on an uplifting flavor, while also having a relaxing, soothing quality. Does the idea that what we do we’ve always done and always will do relieve us of some of the stress of the present? Perhaps. But the percussion seems to take on something of a sense of urgency partway through. The bass and drums drop out toward the end, as if the piano is facing an eternity stretching out in both directions alone. It is somber, yet pretty. That’s followed by “Hirte,” which translates as “Shepherd.” This too begins with some gentle, introspective solo work on piano before the others come in. This piece maintains that gentleness, though, for me, there is also an air of melancholy, perhaps an air of loss, or at least of letting go, and a sense of loneliness.

“Das Andere Tanzlied” has a more cheerful sound and spirit from its beginning, the trio starting this one together. The piano part has a pleasant sense about it, and there is a light quality to this piece. This track also includes a drum solo in the second half. There is an inquisitiveness to “Oh Mensch,” though perhaps also some hesitation. And yet the theme here is overall a pretty and comforting one, like a slow dance through life, unharmed though around us there be sadness and some strife. This track feels like it reaches out a hand, asking us to join. There is a nice lead on bass, sounding as if joining the piano in a dance, or rather taking the lead for a moment in that eternal dance. That’s followed by “Oh Himmel,” which begins with some percussion, as if announcing a new dance, a new day. There is a joy here, and contentment, as if looking forward with some enthusiasm to whatever this day will bring, and to sharing it, for there is nothing lonely about this piece. Then “Also Tanzte Feli” begins with a rather light feel, as if our feet are barely in contact with the ground, as if this dance occurs in air and whatever is solid is irrelevant. There is something beautiful about this piece, and about the joy with which it is delivered.

“Blues Für Nietzsche” is the only track to directly refer to the philosopher in its title. It is an active piece, and I particularly like the drum work. And in the middle there is a good bass solo. That’s followed by “Angelico/Bavaria,” one of only a few tracks not composed by Kilian Kemmer. “Angelico” was written by pianist Frederic Mompou. The second section of this track also provides a dance. Then we get “Auf Den Glückseligen Inseln,” which translates as “On The Blissful Islands” (and apparently is a chapter title in Thus Spoke Zarathustra). And there certainly is a happiness to the sound of this track, particularly Kilian’s piano work, while the drums take on a lively, excited vibe.

“Mit Dieben Und Verbrechern” swings and grooves right from the start. This is a fun track with a lighthearted vibe, and it includes a drum solo toward the end. This one feels very much in the present, in the now. It is followed by another of the tracks not written by Kilian Kemmer, and the only jazz standard of the album, “It Don’t A Mean A Thing.” Interestingly, it is slowed way down, so that it doesn’t swing like the previous track, but rather has a kind of bluesy sound. That is followed by the final track not composed by Kilian Kemmer, “Das Fragment An Sich,” which was written by Nietzsche himself. I had no idea that Nietzsche played piano. When I think of Nietzsche, musician is not the first thing that jumps to mind. This is a short piano piece. The album concludes with “Das Grösste Schwergewicht,” featuring Katharina Neudorfer joining the trio on vocals. The lyrics are in German, so no, I have absolutely no idea what she’s saying. But it is an interesting piece, with more of an improvised feel than the other tracks.

Und Zarathustra Tanzte is scheduled to be released on April 30, 2021.

Posted by Michael Doherty at 1:59 PM