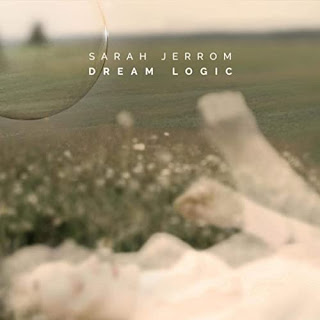 Sarah Jerrom is a vocalist and songwriter based in Toronto, Ontario.  Her new album, Dream Logic, features all original material. The group organized for this release is also called Dream Logic, and is made up of Sarah Jerrom on vocals and piano, Harley Card on guitar and vocals, Rob McBride on double bass, and Jeff Luciani on drums and percussion. The music has its own sound, its own reality, mixing jazz and an ethereal sort of folk, with some pop elements as well, creating intriguing and alluring landscapes, fitting with the album’s title. Most of the songs on this album were written by Sarah Jerrom.

The disc’s opening track, “Snowblind,” begins with some pretty vocal work that sounds like it could be part of the soundtrack to a strange independent film from the late 1960s, one of those trippy films that isn’t quite horror, but which has an eerie, unusual atmosphere. I immediately love it. And then the work on hi-hat has a fast pace, a sense of urgency that works in some contrast to the vocal work. There is also a cool instrumental section in the middle that features some really good work on guitar. This song does include lyrics, but it is the other vocal work that I love most here. That vocal work begins as an ethereal, otherworldly type of sound, and toward the end veers more into scat territory. “Snowblind” is followed by “Accolade Parade,” which features some great percussion, particularly during the verses. And check out these lyrics: “As your dreams gather rust/Holy statements scattered in the dust/Magic dealers push the elixir you should trust.” There is something of a bright pop vibe to sections of this track.

“Fata Morgana” begins with percussion, setting an interesting tone, a rhythm that is maintained beneath Sarah’s pretty vocal work, creating an unusual dynamic. This one too has some unusual lyrics, such as these lines: “Are you my savior or my doom/Are you the only choice there is/Perhaps some eyes will meet with mine/Though they’ll never be like his/I do not care/I wander and I wait.” That rhythm dominates the instrumental section, having a strong effect on the way we take it in. This track also contains some beautiful vocal work toward the end. Then it is the piano that really pulls me into “The Persistence Of Water,” the way her work on piano supports that gorgeous vocal performance. Apparently, this is Sarah Jerrom’s first album to include her piano work.

There is something of a cinematic or theatrical feel to some of this music, starting with the first track, and also including “Things That Came Out Of The Sea” (a title that I really like). “But from somewhere behind me/A voice was calling, find me/Find me, find me.” “Memorabilia” opens with a wonderful piano section, and builds from there, featuring some excellent work on bass. I love that this piece is like its own world. There is something dramatic about it, especially in Sarah Jerrom’s vocal delivery, and in that instrumental section toward the end. This is one of my personal favorites. It is followed by “Illusions,” which has a cool vibe from its start, mostly in that guitar work. And I dig that bass lead. This one was written by Harley Card and Michael Herring. “In a blink of an eye we are gone, illusions.”

Joe Lapinski joins the group on acoustic guitar and backing vocals for “Rose,” which has a sweeter, pretty sound. It also has perhaps a more earthbound vibe than many of these tracks, feeling more intimate. “Wheel Remember” opens with beautiful vocal work. That vocal work has a soothing quality, like she is going to take us by the hand and lead us into a dream. The guitar also has a gentle vibe, and you just want to let go and fall into this track. This is another of my personal favorites. It is followed by “Fergus,” which features lyrics by Laura Lind. “Did I ever say I loved you, Fergus/Would it have mattered anyway/Now Fergus, dear Fergus/You threw it all away.” The album then concludes with “Tiny Lights,” another compelling track. It is remarkable how Sarah Jerrom can guide and lead us with her voice, often without the need of words, and create distinctive realms for us to explore.

Dream Logic was released on March 26, 2021 on Three Pines Records.

Posted by Michael Doherty at 4:03 PM