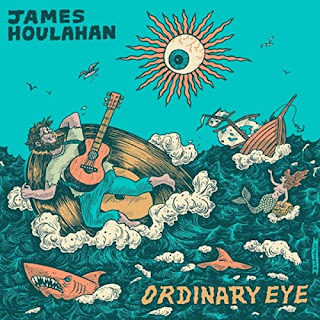 In these strange and often ugly times, we turn to songwriters to help us make sense of it all, to help us process what we’re seeing, and to let us know we are not alone in whatever it is we are experiencing and feeling. James Houlahan proves himself once again to be a talented and relevant songwriter on his latest release, Ordinary Eye. This follows his 2018 album, The Wheel Still In Spin, and as on that one, here he is joined by Fernando Perdomo on keyboards, bass and acoustic guitar; Danny Frankel on drums and percussion; and Esther Clark on vocals. On this album he is also joined by the incredible Scarlet Rivera on violin. You know her from her work with Bob Dylan and several other artists, as well as from her own solo career. Ordinary Eye features all original material, written by James Houlahan, songs to help us face and deal with these times. By the way, the CD’s cover art work is also perfect for our times – on a turbulent sea, full of sharks and a mermaid beckoning him to his doom, with his boat damaged and about to go down, the man is reclining on a giant record, seemingly saved by music. That’s how it has felt for many of us for more than a year now, with new releases like this one keeping us relatively sane in a crazy and dangerous world.

With a title like “As It Is,” I was expecting the album’s opening track to be about giving up to an extent, like that oft-heard sentence “It is what it is.” And indeed, when this one starts, there is an air of melancholy, its opening line being “There’s a dark cloud over everything.” But he follows that line with these: “But I’ve got the guts to stand here and sing/A song that won’t change a thing/A simple dream of love for everything/As it is.” Yes, it is about acceptance, but not necessarily about giving up. And so it is an important song for us to listen to these days, when even acceptance is, or seems, a difficult and bitter thing. To look honestly and openly at all that surrounds us, to take in the truth. There is something comforting in this song. “All I want for now is clarity/To behold everything that I see/As it is.” Then some wonderful work by Scarlet Rivera on violin opens the second track, “Tomorrow’s Had Enough Of Me” (a title I love, by the way), and her presence is appreciated throughout the track. This song has a sweet and gentle sound and vibe. “All these days march by like soldiers/Searching for another war.” A more cheerful, peppy groove is established at the beginning of “Tehachapi Dust,” a fun song that might get you moving and smiling. I really love that work on drums. “Hit a bit of bad air/Gave us all a shake/Thought maybe I’d sleep/But I stayed awake.”

“Eye Of The Storm” opens with the depressing line “The bottle’s almost empty,” and the picture painted in these lyrics is of a lonely man at a bar at the end of the night. Yet, it does become encouraging and optimistic soon enough, as he drifts in his mind: “Dream about the leap/I’ll take with you/Where we fly/Through hurricane sky/Searching for the eye/Where I’ll see you once again.” I also really like that instrumental section toward the end, particularly that work on guitar. That’s followed by “What Is Our Love,” which has a pleasant rhythm, accompanied by more wonderful work on violin. “It’s more efficient to be without pain,” James Houlahan sings at this beginning of this one. Yes, another compelling opening line. He also sings, “It’s not productive to wander alone.” Interesting, his choice of words, for “efficient” and “productive” are not words you’d expect in a song about love. There is also something playful in his references to smart phones and drones. And the album’s cover comes to mind when I hear the lines “You’ve got me feeling this will all blow over/A heart-wrecked sailor brought to land.”

“Down In The Mud” has a darker, bluesy sound. Its opening lines are “My world is burning in a way it’s never been/Our world is burning, and the flames are closing in.” There is a glorious and shared pain and ache in his voice. Just listen to his delivery of lines like “I can feel it in my blood” and “I’m kneeling down in the mud.” This track also features some effective, plaintive guitar work. James returns to a folk sound on “Walking Through The Fire,” which features more good work on violin. “And the places we’ve yet to see/And the people we’ve yet to be/As the flames they grow higher and higher/Walking through the fire.”

In Timequake, Kurt Vonnegut wrote that many people are desperately in need of the message, “You are not alone.” That feels truer these days than ever before. In “You Are Not Alone,” James Houlahan sings, “Getting sick of all the daily hatred/Weary of all the constant lies/Wondering where is our sense of justice/You want it there right before your eyes/I want you to know you are not alone.” And yes, this song has the soothing and uplifting effect we are looking for. And at the end, a whistle announces a different section, dominated by some cool percussion, making us feel that we are on the edge of change. That’s followed by “The Jailer,” an interesting and unusual track in which he sings “Stop thinking about the jailer/Stop thinking about the time.” Then “All These Blues” is a beautiful and moving song with a strong vocal performance. “All that dreaming we can’t have back/Cast my worries to the seven winds/Roll my dice with a hand that wins/And if I lose, I’ll be back again.”

Scarlet Rivera delivers more wonderful work and expressive on violin on “On My Own,” a song that has a bit of a Neil Young vibe. The album then concludes with “Writ In Water,” a strange and engaging song. The beat sometimes has a New Orleans flavor, like a celebration, yet the song also has a blues feel, with a raw delivery. James Houlahan certainly keeps things interesting. This track also provides the album with its title in the lines, “There’s a subtle cry for morning/Rising to my ears/Promising freedom/From popular fears/There’s a mighty ghost howling/Through a skeleton of years/Ordinary eye/Diamond tears.”

Posted by Michael Doherty at 7:30 PM