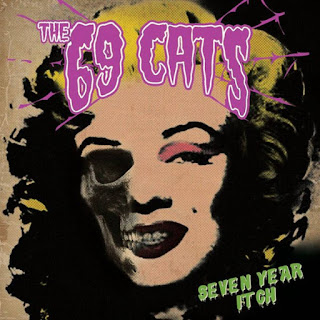 These days it seems that death is in the air and on our minds. Be it the pandemic, or the gun problem which is growing by leaps and bounds every damn day, we feel surrounded by death. It is too much to deal with, and so one way to approach the subject is with a morbid sense of humor. Enter The 69 Cats, a delightfully twisted macabre group made up of Jyrki 69 (real name: Jyrki Linnankiva; of The 69 Eyes) on vocals; Danny B. Harvey  (of Headcat 13) on guitar, keyboards and vocals; Kim Nekroman (of Nekromantix) on bass, and Rat Scabies (real name: Chris Millar; of The Damned) on drums. The group’s new album, Seven Year Itch, features some special guests on certain tracks, and contains mostly original material, written or co-written by Danny B. Harvey. The album’s title, of course, comes from the Marilyn Monroe film directed by Billy Wilder, and the album’s cover is a play on the famous Andy Warhol portrait of Monroe.

Seven Year Itch opens with an original number, “She’s Hot,” with Jyrki’s great deep, haunting voice coming from six feet below, singing “When she’s dancing on my grave, she’s on fire.” And this track features some great classic rock and roll guitar. That’s followed by a cover of “Hollywood’s Bleeding,” originally recorded by Post Malone. On this track, The 69 Cats are joined by Annie Marie Lewis on backing vocals. “You never took the time to get to know me/We’re scared of losing something that we never found/We’re running out of reasons, but we can’t let go/Yeah, Hollywood is bleeding, but we call it home.” This song was released as the album’s first single. In “(You’re) The Kind Of Girl I Need,” an original song, Jyrki sings  “You’re the kind of the girl that makes me scream.” Ah, is there any better compliment in this dark realm? I love this song. It is a lot of fun, featuring some good work on guitar. At certain points, this track reminds me a bit of “(I’m Not Your) Steppin’ Stone.”

“Hey World” is a song that Danny B. Harvey wrote with Sky Saxon, apparently for an album the two were working on before Saxon’s death in 2009. This track features Sky Saxon’s vocal work, which is cool. I love this kind of rock and roll, it is good music to cut loose to. Then “(Let’s Go) Psycho” comes on hard and fast, and will have you moving before you even know what’s happening. I can certainly use this music right now, and I imagine there are plenty of other folks out there who are eager for this. Are the screams those of the victor or victim? It hardly matters. Such distinctions are a thing of the past, for now we are all a mass of blood and limbs and anger and desire. And then there is a cool spoken word section in the second half: “We are the victims of the techno age/Violence, lust and lots of rage.” Well, there you have it. This is another older song, written twenty years ago by Danny B. Harvey and Brigitte Handley, and included on Handley’s Stand Your Ground EP. And Brigitte Handley is present on this version too, providing backing vocals.

“Vampire Shuffle” opens with the question “What you want me to do?” Then the question becomes “What you want me to do with you?” Ah, well, that’s another question altogether, isn’t it? This is a song about becoming a vampire. Ah yes, a lovely dance of the doomed. “You will feel no sorrow, you will feel no pain.” And the line “We can dance on your grave” is an interesting variation on the line from the album’s opening number.  Then they deliver a great cover of “Teddy Boy Boogie,” a song originally recorded by Crazy Cavan ‘N’ The Rhythm Rockers, and also done by Zombie Ghost Train. This is another ridiculously fun number. Sure, it might begin with a mundane concern, being stopped by the cops, “Along came a copper and he took down my name,” but the tables soon change: “So I whipped out my razor and slit his throat.” There might be something cathartic about those lines for some folks, in these days when the police present as much danger as criminals. A later verse brings him in contact with the police again, with a similar outcome: “A cop car came up from behind/So I whipped out my razor and changed his mind.”

Some howling winds or howling creatures populate the world of the instrumental track “The Hell Of The Mountain King.” This is another favorite of mine. I love Grieg’s “In The Hall Of The Mountain King,” and for a time was collecting as many versions of that piece as I could find (I still need to pick up The Who’s rendition at some point). This is an absolutely fantastic addition to that collection, and it features some great guitar work. Then “I’m Evil” comes strutting in, and it begins with that perennial blues line, “Well, I woke up this morning.” He tells us straight out, “You know, I’m evil/Evil as a man can be/Well, I’m so damn evil.” And it’s not like he is really bragging either, just stating a fact, with perhaps a bit of a confession too, as in these lines: “Well, she said she’s going to love me until the day she dies/I took out my pistol and shot her between the eyes/Because I’m evil/Evil as a man can be.” The album then concludes with a cover of “It Ain’t Enough,” a song written by Larry Wallis. I dig the energy of this song, and of the entire album.

Seven Year Itch was released on April 16, 2021 on Cleopatra Records, and is available on both CD and vinyl (the vinyl, by the way, is pink).

Posted by Michael Doherty at 12:50 PM