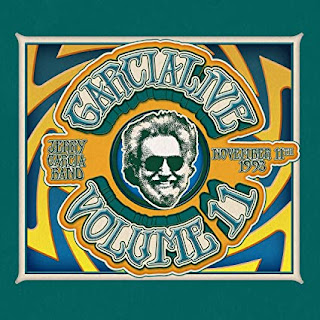 There have been very few official releases from the last few years of Jerry Garcia’s life. At that time, the Grateful Dead seemed to be struggling a bit. Folks have claimed that their last great run was the Boston 1991 series of shows. I was there, and, yes, all six shows were fantastic. However, after that there were still plenty of great moments, even magical, life-changing moments, and some excellent shows. But a spectacular tour or run of shows was basically a thing of the past. And much of that was due to Jerry Garcia’s declining health.  Yet, during those years, for whatever reason, the Jerry Garcia Band shows seemed as strong as ever. Perhaps it was because the scene wasn’t as crazy, and Jerry felt less pressure. Who knows? Volume 11 in the Garcia Live series contains the complete show that the Jerry Garcia Band performed on November 11, 1993 in Providence, Rhode Island.

The first disc contains the complete first set. The band kicks off the first set with “Cats Under The Stars,” always a good choice for show opener, with that fun groove and lines like “I ain’t ready yet to go to bed/Think I’ll take a walk downtown instead.” And this is a pretty good version. The jam isn’t spectacular, but it is solid. After all, this is just the beginning, to pull the crowd together and get ‘em dancing. Those backing vocals sound so good. It’s followed by one of my all-time favorite Jerry Garcia songs, “Mission In The Rain.” I was always drawn to his slower, more sorrowful, soulful songs, and in the later years, those were the songs that seemed to really shine the most often, the songs where the magic was most likely to happen. And this song is certainly a highlight of the first set. Jerry really gets into it vocally almost from the start. And his guitar has moments of great beauty.  “All the things I planned to do, I only did halfway.” This is an excellent rendition.

Things get fun again with a cover of “That’s What Love Will Make You Do,” one of those delicious, somewhat reluctant declarations of love, which Jerry handles so well. And I love Melvin Seals’ lead here, which spirals up from the ground into the skies and then brings us back down again, before catching fire. And then Jerry’s voice sounds so damn good and smooth and soulful at the beginning of Bob Dylan’s “Simple Twist Of Fate,” with just a bit of ache. Again, it is these slower songs where Jerry is at his best. His guitar has a fluid quality, like it is reaching at you from under the waves of a clear blue ocean. Sure, Jerry forgets the lyrics at one point, and interestingly comes back with the line “And forgot about that simple twist of fate.” Perfect. Those moments worked just as well to bring everyone together. The bass lead by John Kahn is a little weird, a bit jarring at first, but this is still one of the set’s highlights, and it ends gloriously.

Jerry then leads the group into a fun and groovy version of “Ain’t No Bread In The Breadbox,” featuring some delicious harmonies on the chorus. “Open up your eyes, little darling/It’s time to move along.” And this track certainly gets us moving and shaking. We then get into gospel territory with “My Sisters And Brothers,” another song I remember the crowds always enjoying. “Through this world of trouble, we’ve got to love one another.” And this song reminds us that “We’re only passing through.” Indeed. The band then wraps up the first set with a good version of “Deal.”

The second disc contains the complete second set. Jerry opens the second set with a sweet, slow, kind of mellow rendition of “The Way You Do The Things You Do.” They really ease into the second set with this cover, and even the jam has something of a laid-back quality. Then approximately ten minutes in, there is a great, jazzy section, with Melvin and Jerry interacting wonderfully. That section is what really stands out in this version. Absolutely magnificent stuff. And there is a cool vocal section at the end. Unlike the first set, this set contains no original material, and the band follows “The Way You Do The Things You Do” with a cover of Van Morrison’s “He Ain’t Give You None,” Jerry giving a really good, passionate vocal performance, and taking us to a wonderful place. Then during the jam, Melvin delivers some great stuff on keys, and the song takes on a pleasant, cheerful vibe.

I love the way Jerry Garcia handles “Dear Prudence,” adding so much to the original Beatles version, giving it a great, soulful quality. This is a beautiful rendition, though honestly I don’t believe I’ve ever heard anything less from Jerry on this song. The jam gathers a good amount of energy. The song then slows down at the end, and instead of returning to the chorus, leads straight into “When The Hunter Gets Captured By The Game,” written by Smokey Robinson. Jerry gets into the emotional core of the song, giving us an earnest rendition.

Jerry then takes the group into “Don’t Let Go,” a song that was always appreciated and usually got the crowd excited, for it has a great groove, a lot of energy, and usually plenty of space for jamming. I totally dig David Kemper’s work on drums. Does Jerry forget the lyrics at one point? No matter, this is a really good version, and, as you’d expect, it features some excellent jamming, with things getting loose at moments, even drifting into spacey territory. Basically, everything we could want. They then wrap up the show with “Midnight Moonlight,” a song from Jerry’s bluegrass days with Old & In The Way. The song, written by Peter Rowan, is a whole lot of fun, a cheerful number with uplifting energy and some nice work on keys, a great choice to send folks off into the night.

Posted by Michael Doherty at 8:16 PM