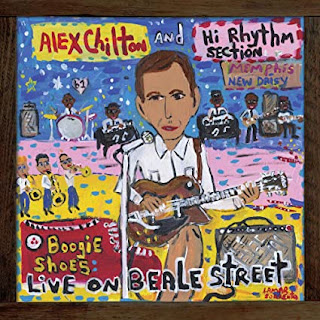 You know Alex Chilton’s voice and guitar from his work with The Box Tops in the 1960s and Big Star in the 1970s (and again in the 1990s into the 2000s). And in Big Star, he also wrote or co-wrote most of the material. The world lost Alex Chilton to a heart attack in 2010. But we are still being treated to new releases now and again, including a wonderful new live album, Boogie Shoes: Live On Beale Street, on which he performs a set of covers of some great rock and roll and pop songs, backed by an excellent band of Memphis musicians, including Mabon “Teenie” Hodges on guitar, Charles Hodges on keyboards, Archie “Hubie” Mitchell on keyboards, Leroy Hodges on bass, Howard Grimes on drums, Jim Spake on tenor saxophone, Ronald Kirk Smothers on baritone saxophone, and Scott Thompson on trumpet. What a crazy amount of talent, right? Hi Rhythm has backed artists like Al Green and Ann Peebles, and has also released their own albums. And here, these musicians are able to relax, cut loose, and enjoy themselves thoroughly. These tracks, all previously unreleased, were recorded on October 7, 1999 at the New Daisy Theatre in Memphis. The set was part of a benefit for Fred Ford, to help with the cost of his medical bills. The disc includes liner notes by David Less, who produced the album and also wrote Memphis Mayhem: A Story Of The Music That Shook Up The World.

The disc opens with its title track, a totally fun rendition of “Boogie Shoes” (yes, the KC & The Sunshine Band song). The horn section sells it, particularly that great lead on trumpet halfway through, which is so bloody delicious and exciting. By the way, for anyone who is curious, KC & The Sunshine Band put on an absolutely fantastic show the one time I saw them in concert. I was shocked how good those guys were. That’s followed by an enjoyable rendition of “Precious, Precious,” a song that was a hit for Jackie Moore back in 1970. It is clear that Alex Chilton is having a great time here, right from the song’s introduction. “Here’s our chance, come on, let’s take it.” Oh yes.

The fun vibes continue with a good, energetic version of “634-5789,” written by Eddie Floyd and Steve Cropper, and originally recorded by Wilson Pickett. I particularly dig that work on keys, and then that guitar part. I also love the loose vibe of this show. On this track, you can hear Alex Chilton direct the band at one point, “All right, take it up a half step, y’all.” And then you hear him saying to the other musicians, “Let’s play ‘Kansas City,’” choosing the set list as they go. The band is clearly into it, for they deliver a delicious version. I love those horns. There is so much joy to the playing. Scott Thompson is flying on that trumpet, taking the whole place to a level some ten flights above heaven. And what a bright vocal performance from Alex Chilton. This is certainly a highlight of the disc.

There is a bit of an extended instrumental intro to this version of “Lucille,” with Alex’s vocals coming in like forty-five seconds in. And, yes, here he gives us his best Little Richard, with all the right energy. I love that saxophone. Alex Chilton then switches gears, moving to blues for a good rendition of “Big Boss Man,” a song recorded by Jimmy Reed (though the first version I heard was that by the Grateful Dead). The band jams on that groove, and I like that lead on keys. The ending comes rather suddenly.  I wanted these guys to jam on it a bit longer. That’s followed by a kind of sweet, almost gentle rendition of The Supremes’ “Where Did Our Love Go.” There isn’t as much energy as, say, in the J. Geils Band version, but it’s a nice approach.

Alex Chilton delivers a really good version of Chuck Berry’s “Maybellene” (here spelled “Maybelline”). This track is all about his vocals and that guitar, but I also like the work on keyboards. Alex is so at home with these early rock and roll numbers, just enjoying himself. He then says that they’re going to stick with women’s names, following “Maybellene” with “Hello Josephine” (which is also known as “My Girl Josephine”). It’s never a bad idea to turn to Fats Domino, and it’s great hearing the combination of the Memphis and New Orleans sounds. On this track, the entire band gets to stretch out, helping make this another highlight of the disc. And though it is seven minutes, it still feels like it ends prematurely. The disc concludes with a cover of “Trying To Live My Life Without You,” a song made popular by Otis Clay. In the brief introduction, Alex says, in self-deprecating manner, that he was going to get out of the way so that Rufus Thomas and Carla Thomas could get up there and play “some real music for you, for a change.” Oddly, this track fades out before the song ends, just as Alex says he’s going to introduce the band.

Boogie Shoes: Live On Beale Street is scheduled to be released on May 7, 2021 through Omnivore Recordings.