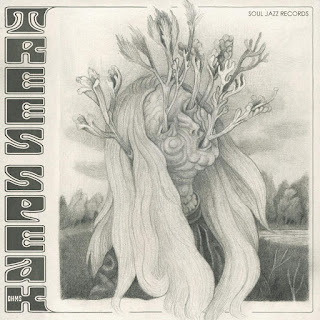 Even before the coronavirus outbreak, we’d been on the edge, emotionally and spiritually. For three years we’ve been waiting for the destruction of the mendacious, racist game show host who has been pretending to be president, but for some reason it just never comes. As a result, we’ve been in a sort of purgatory. But at least we could reach out to each other, gather together, hug each other, offer some comfort and some hope and some humanity. Now with the virus that is becoming impossible, or at least inadvisable. We are isolated, frightened, and still in that state of purgatory. Seems like a good time to immerse ourselves in some experimental music, see what it has to offer. Trees Speak is the project of Daniel Martin Diaz and Damian Diaz. They released their first album, a self-titled double album, in late 2017, and now are following that up with Ohms, which is being released on vinyl, and which includes a bonus seven-inch of “Invisible Sine Wave” and “Witch Wound.” That single had previously been released on its own as a limited edition record with a white label, and sold out almost immediately. So now you have an opportunity to grab yourself a copy.

The tracks on Ohms largely run together, creating a single musical experience. It opens, with “Soul Sequencer,” which begins with an eerie call from an electric mountain top, an intelligence reaching to us, drawing us toward it, then scanning us, testing us. When they’ve completed their initial work, the track suddenly takes on a steady beat. We are welcomed, perhaps, through a door into some sort of factory, where people are being duplicated, multiplied, but without eyes, sliding off the assembly line and having to feel their way through metal debris. It is fascinating, horrifying. Would it be wrong to dance to this? It helps, doesn’t it? We find a release. Then, as that track segues into “Nitrous Cross,” we are dropped into a darker space, with tiny lights piercing us from above, here and there, the air thick, and stirred around us by an unseen hand. We have no footing, and feel like we are about to drop farther, but instead end up floating. Soon, in “Shadow Circuit,” we find ourselves in a grid, each of us assigned a number, which is emblazoned in light on our chests, like glowing tattoos. People flash by, are added to, multiplied, and afraid of being subtracted. We move closer and closer to the machine, the sound growing louder, to learn our fate. But then we are through, and the rest recede behind us. What has happened? We look back, but vision is muddied now. Yet around us is a peaceful feeling at last, and we close our eyes. It doesn’t last long, however, and there seems to be danger as we move through “Blame Shifter,” and the slow beat that emerges seems to hold us in place, to promise some intrigue. People lumber by in the shadows, carrying sharp tools, weapons, and we try to blend in, but we’ve been drugged and have little control. In “Spirit Duplicator,” a new electronic voice appears, pushes away everything else, calls our focus to it, demands it, allowing us to see nothing else, to hear nothing else. We are all ears and eyes, and this force enters us everywhere. This track suddenly ends, and there is a brief pause before “Nobody Knows,” when a new group comes out of the shadows, out of the silence, shaking censers, and pulling behind them some heavy chains. Before we can see what is at the other end of the chains, the track ends. In “Sadness In Wires,” we are alone again, feeling despondent, and yet also holding a bit of hope in our isolation. Things begin to shift and fade, and perhaps none of this is real, just something we are hearing on a radio.

The second side opens with “State Of Clear,” and things seem fine now. We have a good groove, one we can move to, and are in familiar territory. Perhaps things aren’t completely perfect, but we can move freely here, the sound closer to rock, to pop, to recognizable landscapes, and we are put at ease. But just as we get comfortable, reality shifts again toward darkness with “Sleep Crime,” a foreboding, a sense of something ominous runs along our skin. We slow, look around. Something is there, something dangerous, something frightening, but we can’t quite see it. No light can penetrate its form long enough to define it. We just pray it will pass us. Then, with “Knowing,” we are dropped into a cool, psychedelic spot, where maybe things are strange, but nothing is harmful. We know we can handle whatever may happen here, for none of it is likely real anyway. Things are loose. Then we turn a corner we hadn’t expected to be there, pass through a curtain into a mellower place, “Splendid Sun,” and whatever is here has been here for a long time. Then in “Ohms,” it is like we are taught how to control this place, or at least how to keep from having it control us. We test it, turn things up here and there, find we like it. It is like we have a handle on this new reality now. So then when this new thing comes thumping in, “Out Of View,” it feels like it is entering, even invading, our own territory. That is how involved we are at this point. We have adapted. And so, in “Psychic Wounds,” we are okay, lighter now. And any wounds can be healed, though there is a desire for sleep, for rest. With “Silicone Emotions,” the sounds once again become more electronic, but not frightening. Have we fully become part of the machinery? Is this our voice reaching out now to another? To someone we wish to pull in? The message fades. The album concludes with “Octave Cycle,” and now there is a curiosity, but not a fear, of what is out there, and of what is in there. Something is approaching, but we stand fast, letting its force pass like a breeze, rippling our skin. Its beat is our beat. We hold and let go simultaneously. There is a peace and a freedom even among the clamor and the coming darkness.