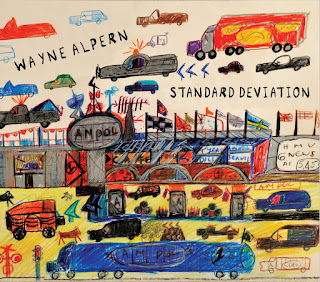 On the inside of the CD case for composer and arranger Wayne Alpern’s new release, Standard Deviation, there is a quote from Frank Zappa. It’s in capital letters, much larger than all the other printed material on the case, presented almost like graffiti. The quoted line is this: “WITHOUT DEVIATION FROM THE NORM, PROGRESS IS NOT POSSIBLE.” On this album, Alpern arranges the material of other composers, and though some of the song choices may seem standard, his arrangements are certainly not. This album follows closely on the heels of Alpern’s previous release, Skeleton, which came out on CD only in January. Unlike that album, this one contains no original compositions. With the exception of Nick Grinder on trombone, this release features different musicians from the previous disc.

Standard Deviation opens with a quirky and fun rendition of Michael Jackson’s “Thriller.” This song, and the album from which it comes, could not be avoided in my early teens. Those songs seemed to dominate the airwaves and our school dances for several years. While I’m not a huge fan of that record, “Thriller” is certainly the most interesting and enjoyable of its tracks. This rendition is powered by horns, which works quite well, particularly as the bass mostly maintains that familiar theme. John Challoner is on trumpet, Owen Broder is on alto saxophone, Adam Larson is on tenor saxophone, Nick Grinder is on trombone, Dave Baron is on bass, and Nathan Ellman-Bell is on drums. “Thriller” is followed by an unusual take on “Ode To Billie Joe,” featuring some groovy and funky percussion. My girlfriend brought up this song to me just the other day, and together we looked up information on the story, because she had her own ideas on just what it was that was tossed from the Tallahatchie Bridge (and it certainly was not what was used in the film inspired by this song). Apparently, songwriter Bobbie Gentry has never revealed precisely what she intended the object to be, saying that the exact object isn’t important, that it’s the family’s indifference to news of the suicide that is at the core of the song. Anyway, this track features fewer horns than the opening track, and Benjamin Sutin’s violin takes a prominent spot in the telling of the tale, along with Owen Broder’s alto saxophone, and Matt Podd’s piano. This rendition gets seriously fun toward the end, and I love that section with violin and percussion, which reminds me of the Irish folk music I love so much.

D’Layna joins the group on vocals for a soulful and cool version of Bob Dylan’s “Dear Landlord.” John Challoner delivers some wonderful work on trumpet, effectively a second voice, making the song a sort of duet. However, D’Layna doesn’t deliver any of the song’s lyrics, but rather riffs a bit. And Matt Podd delivers some nice work on piano. This is a thoroughly enjoyable track, something to put a smile on your face.  That’s followed by “Don’t Stop Believin’,” another song I heard a whole lot while growing up. Seriously, who didn’t own a copy of Escape? The moment this version from Wayne Alpern starts – on violin, no less – I become seriously happy. This track is delightful. Interestingly, there are some vocals on this track, provided by Jeff Burnige, but they are presented as spoken word, sort of in the background, like on an old radio. “Just a city boy/Born and raised in south Detroit/He took the midnight train going anywhere,” then skipping to “For a smile, they can share the night/It goes on and on and on and on.” I’m guessing any fan of this song (and who isn’t?) is going to dig this rendition. There is even a brief drum solo in the middle of it. Then the bass gets “Teenage Dream” going. This is the only song on the album that wasn’t familiar to me (it was written by Katy Perry, someone I haven’t listened to), but I am digging the bass line. The horns seem to be dancing at moments. There is certainly some joy here, which I appreciate. But for me, it is that bass line that really sells it.

I have loved the Zombies’ “She’s Not There” since I first heard it in my childhood (I had it on a cassette). And who isn’t thinking about zombies these days? It’s difficult to not see the parallels between our current situation and those zombie virus films, except of course for all the flesh-eating, which so far we’ve managed to avoid. Anyway, this is a wonderful rendition, with some great stuff from Benjamin Sutin on violin. And these guys keep it going, stretching the song to nearly eight minutes, adding a little nod to James Bond at one point. Wayne Alpern follows that with a cover of the 1975 hit song “Who Loves You” by The Four Seasons (here titled “Who Loves You Pretty Baby”). This one is all about the horns, and has a sweet tone at times, particularly on the title line. Then as the song nears its conclusion it takes on a cool vibe. Wayne Alpern also offers a good rendition of Gotye’s “Somebody That I Used To Know.” As you might guess, this track features a delicious bass line. It also features some excellent work by Benjamin Sutin on violin. There is a beautiful and moving section in the second half of the track.

This album contains a second Bob Dylan song, “As I Went Out One Morning.” Interestingly, this one is from the same record as “Dear Landlord,” John Wesley Harding, which was released in 1967. This track features just four musicians: Owen Broder on alto saxophone, Benjamin Sutin on violin, Dave Baron on bass, and Nathan Ellman-Bell on drums. So it ends up having a fairly straightforward sound, which works well. The album then closes with another classic tune from the 1960s, “My Girl.” This is another one that never fails to bring a smile to my face, and I love what Wayne Alpern has done with it. This is quite a pretty rendition, with more outstanding work on violin, and also by Owen Broder on clarinet. This track takes hold of us, and carries us on an emotional journey that surprised me the first time I listened to this disc. It’s really a phenomenal rendition.

CD Track List
Standard Deviation is scheduled to be released on April 3, 2020.
Posted by Michael Doherty at 10:39 AM