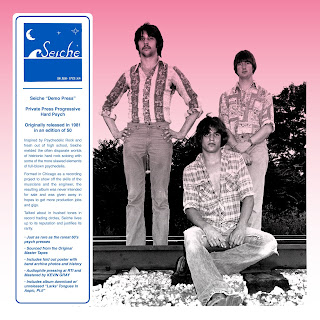 If you collect records, you know that some releases have rather small pressings. Take those Record Store Day releases, for example, some of which have pressings of only five hundred copies. Well, when the Seiche record Demo Press was originally released in 1981, there were only fifty copies made (at least with the proper record cover; apparently there were another hundred copies that came in a plain white sleeve). Talk about a limited run! It’s insane, and it provides some clue as to why few have heard of it, or even of the band. But fortunately, the record has now been re-issued by Jackpot Records, so more people can enjoy this rare treasure. Seiche was a progressive rock band based in Chicago, made up of Steve Zahradnik on guitar and vocals, Tom Vess on bass and vocals, and Marc Levinson on drums and percussion. This trio formed in the late 1970s and put out only that one album before disbanding. The re-issue has a different cover, with the original blue and white artwork appearing in the upper left corner of the sticker on the plastic wrap. Inside, the liner notes provide some information on the band, as well as several photos. The songs are all originals, written by Steve Zahradnik and Tom Vess.

The record opens with “In The Calm Of Your Eye,” which has a mellow, haunting sound at the start, seeming to take some influence from the darker side of folk. That tone is maintained, even as the song develops a cool drum beat. “And we will find a way/To see/There can be/Life in the calm/Calm of your eye.” Then halfway through, the song shifts from an acoustic sound to more of a harder rock groove, and soon the electric guitar flies upward, as if suddenly freed of constraints, and the song becomes a cool jam. Then “Evidently Me” begins in that rock realm, but with something of an otherworldly vibe, like the rock music of some fantasy creatures. And when the vocals come in, that sense is even stronger. I am digging this music, and I think I also would have enjoyed it had I heard it when it was first released in 1981. That was the year I started playing Dungeons And Dragons, and something about the sound of this song makes me feel it would have been eagerly welcomed by our group while we played. “There lie certain dangers/Quite beneath the ones you see.” Then this one takes a turn also, led by the bass, speeding up and becoming a hard rock jam, like something Deep Purple might have done in its early days. This band can seriously rock when it wants to. Both “In The Calm Of Your Eye” and “Evidently Me” were written by Steve Zahradnik.

The first side of the record concludes with “Islands,” written by Tom Vess, who leads this one off with his bass. Rather than build toward it, this one begins as a rocking jam, the guys ripping right into it. Perhaps the song takes a breath or two at one point, then that electric guitar is off on a fiery quest, raising specters from the smoke of a ceremony in some distant land. The song then slows its pace, almost as if breaking down. And after a brief pause, it shifts into a prettier and mellower land, and it is then that the vocals begin. “Try to fathom a place that is untouched by fate/A place where you know not what will come/But what does will not harm you/A promised land, perhaps, but in a much simpler sense.” This pretty realm, however, feels like a respite, an oasis, and you just know you will be in a more turbulent, electric territory sooner or later. And indeed, that is the case, and soon things are moving quickly, the drums and bass rushing forward, that groove seeming to say “Onward, now, now, now, let’s go.”

The second side opens with “Dissonant Toys,” which eases in, creating a strange atmosphere, another fantasy realm, like that which a slightly disturbed child might see in his room when the shifting shadows cause things to seem to move, to flicker. Then the song kicks in to become a rock song, and again these guys jam on it, each of the three musicians delivering interesting stuff. This is one of those songs where you might sometimes find yourself focusing on one instrument, sometimes on another. There is some excellent work on drums here. Toward the end, the song returns to that mellower place, as if coming back from the realm of a child’s imagination, and right as the song ends, there is a hint that that realm is about to break through into this reality. That’s followed by “The Maze,” an instrumental track that begins with a glorious energy, like the band is already jamming, and we’ve stepped into the room to check out what they’re up to. There is a brighter, more cheerful sound and vibe to this one, and it moves at a good clip.  And then it’s suddenly over.

“Medicine Man” has a strong progressive rock sound from the start, soon zooming off toward some distant point, then shifting its groove once it has arrived, and that’s when the vocals come in. At that point, it has a bit of a 1960s influence, which is cool.  “When I see you that way it’s so hard to say no thank you.” I love this section. The song then speeds off again just before the end. The album concludes with “Good Mourning,” which opens in a prettier, more relaxed place. Again, a 1960s psychedelic influence is felt. The electric guitar then offers a lament or petition to the gods. Will they answer? It almost doesn’t matter, as the offering seems an end in itself. And the song returns to a more acoustic setting. “Find a new way to live/Learn the way to forget and forgive.”

The special re-issue of Demo Press was released on November 29, 2019 through Jackpot Records.
Posted by Michael Doherty at 1:53 PM