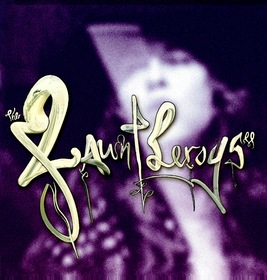 The Fauntleroys are a new group made up of folks you’re likely already quite familiar with: Alejandro Escovedo, Ivan Julian, Nicholas Tremulis and Linda Pitmon. Alejandro Escovedo has a nice long solo career, and you might also know him from his work with Rank And File. Ivan Julian was a member of Richard Hell And The Voidoids and The Outsets. You heard Linda Pitmon on the new Steve Wynn disc, Sketches In Spain, which was released earlier this month. Last year, Nicholas Tremulis Orchestra released For The Baby Doll. These excellent musicians have now joined forces on a new six-song CD, Below The Pink Pony, which features some nice raw rock music with a ton of energy. This is mostly original material.

Below The Pink Pony opens with “I’m In Love With Everything.” The main line is “I’m so in love with everything, and everything loves me,” but the tone of voice leads us to believe otherwise, especially as we hear “I was watching a crowd, trying to make it bleed/You were thinking aloud, trying to pretend you were talking to me.” The sounds of the music are like that of a love song, turned and twisted and arrived at from some bizarre angle. Yeah, I totally dig it. It’s a cool and slightly odd rock tune to kick off the CD.

It’s followed by “Chinese White,” the album’s one cover song. It was originally done by the Incredible String Band. The Fauntleroys give it a harder, kind of darker edge, and a great intensity.

“Suck My Heart Out With A Straw” is a tune that Ivan Julian apparently had in mind for years, but to which he only now added the lyrics. It’s a fantastic rock song with a punk edge. Where was this song when I was a teenager? It taps into that undirected but very potent energy, and is a song you just want to turn up loud enough that you lose yourself in its strength and attitude. It’s funny how it works that exact way even though I’m far from my teen years. Here is a taste of the lyrics: “Like something dying in the fridge/Like someone jumping off the bridge/Just like Myra Breckinridge/Why can’t you just suck my heart out with a straw.”

“Worry Doll” is a rock tune bristling with attitude, but with something of a sense of humor. I mean, this is a song that has the phrase “machete wrapped in blue chiffon.”

“(This Can’t Be) Julie’s Song” brings to mind some of the work by the Velvet Underground, particularly on the chorus. It’s a delicious track, with some darker tones and some interesting drumming by Linda Pitmon. Also, I love her backing vocals on this track. “In your eyes I see what’s supposed to be/When your loving feels like everything/’Cause when you touch me I get swept away.”

Below The Pink Pony concludes with “Take You Far Away,” a song written by Nicholas Tremulis and Alejandro Escovedo. At first it feels a bit mellower than some of the other tracks, but before long this one has gathered an excellent energy and urgency, particularly on the repeated line, “I want to take you far away.”

Below The Pink Pony is scheduled to be released on September 16, 2014 on Plowboy Records.

Posted by Michael Doherty at 8:15 PM