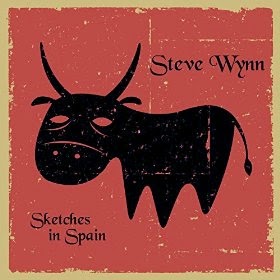 Sketches In Spain is actually two albums that Steve Wynn did that were released in Spain but until now were unavailable elsewhere. So this CD is the first official U.S. release of this material. The two albums are the self-titled release by Smack Dab and Momento, an album by Australian Blonde Featuring Steve Wynn. From Smack Dab, one track is missing: “Smack Dab Attack,” which should be positioned between “Smack Dab” and “Never Been To Spain.” And likewise one track is missing from Momento: “Carnaval,” which should be between “Last One Standing” and “Underneath The Radar.” But what’s included is nearly seventy-nine minutes of fantastic music.

Steve Wynn is such an intriguing songwriter, singer and musician. The more I listen to him, the more I want to listen to more of him, if you know what I mean. He’s probably most well-known for his work with The Dream Syndicate, and earlier this year Omnivore Recordings re-issued The Day Before Wine And Roses, a live recording from 1982. Sketches In Spain contains a whole lot of good music. There really isn't a weak track here, and each song has its own feel.

This CD begins with the more recent album, Smack Dab, released in Spain in 2007. The band Smack Dab is the trio of Paco Loco, Linda Pitmon and Steve Wynn, and their song “Smack Dab” puts them on the list of groups that have a song sharing their band's name, along with Bad Company, They Might Be Giants, Bullied By Strings, Kajagoogoo and I See Hawks In L.A.

The album begins with “I’m Not Listening,” which kicks off with a cool dance groove. While the groove gets me excited, it’s this song’s lyrics that really pull me in. “Now the dust has settled and I can see/But can’t believe my eyes/You’re back at my door, begging for more/But I’m not hypnotized/Say that you love me/Say that you need me/Say that you want me/But I’m not listening.” Great, right? I love this song. I love the kind of sneer in his voice on “what remains is only lies.”

“Quarantine” opens with a simple, but catchy bass line. It’s an interesting song, reminding me a bit of Julian Cope in its unusual vocal line and overall feel. There is some nice work on drums too. This tune is like a bizarre otherworldly jam at times. And then Smack Dab moves just a bit toward folk and sixties pop on “Super 8,” which has a sweet sound.

“Free Love” is a delightfully odd trip, sort of along the lines of some of Syd Barrett’s work. There is a wonderful humor to this one, even with the serious vocal delivery, with surprising lines like “Dennis Wilson says hello/Sorry that he had to go.” This song has such a strange sound which I completely love – like a garage band of squirrels that are obsessed with dolphins and heroin.

“My Cross To Bear” reminds me a bit of something David Lowery might tackle, with a kind of fun, angry tone. While “Free Love” mentions Dennis Wilson, “My Cross To Bear” has the line “She was my Neil Young, and I was her Stephen Stills.” I also like this line: “They say I don’t mix well with others/But it’s just my cross to bear.”

“Never Been To Spain”

The only cover on the Smack Dab album is Hoyt Axton’s “Never Been To Spain.” I have loved this song since I was a kid, in large part because of these lines: “Well, I’ve never been to heaven/But I’ve been to Oklahoma/Well, they tell me I was born there/But I really don’t remember.” This is a really good rendition.

The second album, Momento, by Australian Blonde Featuring Steve Wynn, is actually the first released (in 2000), and is quite a bit different. You can tell that from the opening moments of its first track, “Suddenly,” which has something of a 1970s thing happening, plus bright vibes similar to some of Belle And Sebastian’s work. “Suddenly everything has changed/Suddenly everything is coming my way.” Australian Blonde is Fran Fernandez, Paco Martinez, Tito Valdes and Steve Wynn. (Be sure to read the liner notes on the unusual way this album was recorded.)

“Underneath The Radar” begins with a really cool instrumental section. The vocals, when they come in after a little more than a minute, are delivered as spoken word. The first line is “Yeah, yeah, that was me.” It’s an unusual and interesting song, and I love the way it progresses and the way the lyrics bounce from Barry White to baseball, like one side of a conversation. It’s a nice, long track. “Here’s a few quarters. Put something on the juke box, anything you want, anything you want, I don’t care. Put something on the juke. Barry White? Barry White. Yeah, he’s good. Put some Barry White on the juke box.” And every time I listen to this tune I laugh when he says, “What’s wrong with you, man? Don’t write that down.”

That's followed by "On The Town," which is a delightful and playful tune.

"OTB" comes on fast and strong, and is absolutely fantastic. And it gets better and better, bursting into bluegrass and then a sort of rap thing. I completely love this track, and I bet you will too.  The announcer bit reminds me of the baseball section of Meat Loaf’s “Paradise By The Dashboard Light.”

The only cover on Momento is “Black Is Black.”  This is a slightly slower, playful rendition that is kind of adorable. It includes an added spoken work section: "And here in my darkest hour I know I've done wrong/I can lay myself out naked for all the world to see/Or I can hide away until all has been forgotten/And still, still I can't help myself..." "Black Is Black" was written by Steve Wadey and Anthony Hayes, and originally recorded by Los Bravos.

Momento ends with another really strong track, "Sometime Before I Die." This one feels like a celebration, a nice slice of optimism. “I will raise my glass to the future and not the past/Gonna take my dreams/I'm gonna live them by and by.”

Sketches In Spain was released on July 1, 2014 through Omnivore Recordings.

Posted by Michael Doherty at 10:29 PM